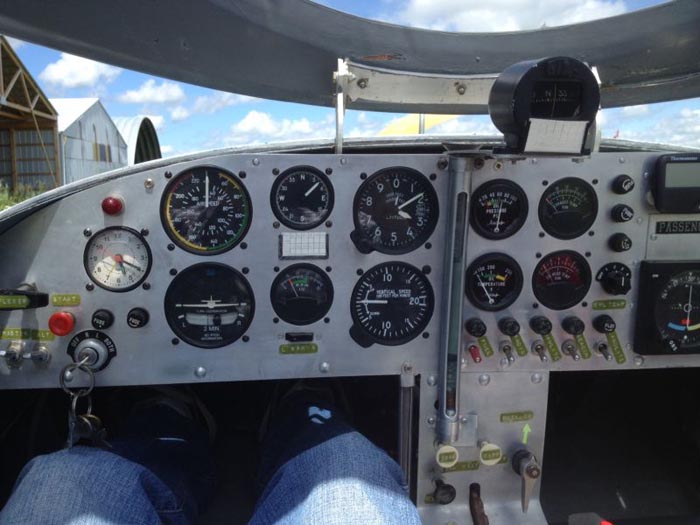 [Editor's Note: Sergey Salomakhin sent me several e-mails about a Q2 project that he picked up on the cheap. There are lots of issues that he brings up here, so I am hoping that some of you who "have been there before" will be able to respond directly to him.]

I recently acquired a Q2 project.  It was started somewhere between 81-86, abandoned, then almost completed around 2011, damaged in taxi tests and put in storage. I was able to get it fairly cheap and, being always fascinated by experimental designs, started to prepare the little machine for the initial flight tests during the summer of 2013.

The previous owner claimed that he flew it once, but I find it difficult to believe, after finding so many problems while going through the airframe and engine. After fixing numerous fuel leaks, cracks, delaminations, broken canopy locks, crushed wheel pants, crumpled airbrake and other snags, I've got the Revmaster running, and have the temperatures lowered under the cowl from insane to reasonable.  It’s now running smooth and stable.

Started the taxi tests and found that the plane is getting marginally stable, but completely uncontrollable after releasing power at around 60 mph. There were also apparent problems with the prop overspeeding (sigh) and the canard is the old GU. Plus I was doing the testing over a fairly uneven grass strip, planning to move on concrete when ready to fly.

So I decided to call it a quits for the 2013 season, found someone that had built and rebuilt Quickies and Q2s back in 80s-90s and was blessed to have him as a mentor. Now I’m preparing a workshop and getting ready to build a new canard. Right now I’m working on a new set of jig tables, and should be able to start cutting foam soon.

This Waddelow canard idea looks interesting, thank you for pointing it out! I was fairly frustrated trying to get the original [carbon fiber spars].

The way I was thinking to build the LS-1 was using a technology similar what Dragonfly uses - with a cut-off nose part of the wing, and a fiberglass [shear web] layered in the cut to create a strong I-beam. Knowing that twisting forces will be fairly slight for the overall wing structure, the "spar" formed this way appears to be fairly structurally sound.

Also, as I'm planning to put a flat-spring main gear instead of the wheels on the tips, much of the mechanical load, especially twisting, will be eliminated.  I’m thinking along the lines of decathlon-style leaf springs, or maybe 150-style torsion tubes - all depending on the space and structural capabilities of the fuselage shell.

So it seems like I’m moving in the right direction - now I just need to figure out how to get a leaf spring attached and keep the CG in range and not overstressing the fuselage shell where it's already stressed quite a bit by the canard attachment.

Benefits appear to be huge, despite getting a bit more drag. Prop clearance, elimination of the spring-board effect, long lever from mains to the tailwheel, wing unloaded from roll and bounce ... And most of all, ability to land on the grass in emergency.

I can tell from experience that even the fast taxi over the grass airstrip is an emergency waiting to happen with the "classic" wingtip gear. :-) Not simply because of the wheels being so wide apart, but extremely dangerous when you hit a bump - and your tail is still flying. There is no control except for the crossed ailerons, and even these are not instantaneous and may only be marginally effective.

This is the main reason I moved to a paved airport.  It also made me want to modify the reflexor control so I can activate them gradually and precisely, instead of the current pull lever on the far-left side of the panel. (Currently unreachable when you stretch your leg trying to use all available rudder to keep the plane tracking straight).

In addition, the upper part of the nose shell is in rather poor shape, too - someone cut off the [header] tank and slapped it back in, creating a visible hump. Poor bird.

That led to the discovery of a couple of issues with the front fuselage fiberglass sandwich. Namely, there are two pinhole leaks from [the header tank], one fairly small, and other going all the way down to the canard mount - eating up the foam in the meantime and ending up in a couple of half-inch delaminated bubbles made of cloth and paint.

My thoughts were, strip the paint down all the way till the original "yellow fiberglass" of the fuselage, find the leak paths, remove delaminated layer pieces, clean up the hole in the foam, let it dry, and fill with microsphere. Then repair the delaminated layer, with reasonable overlap.

My concern is: How thick is the original upper layer of the fuselage sandwich? [How many layers of glass?] Which cloth was used on it? Do you know? Have you heard of other community members fixing similar issues? And I was also surprised that the inner layer of the sandwich was not bubbling up. Maybe pinhole went over the filler, soaking it in process? I’ll know better after sanding it down.

My hope now is to find more people knowledgeable about the quickies, as well as hopefully purchase some spare parts (even original foam and cloth would help, but will mostly need something I couldn't fabricate with reasonable effort). Get the LS-1 for canard, useful gear, and go straight for concrete now - I do believe that this way my little Q2 will become a useful airplane. Next steps would be obtaining an O-200 and maybe rebuilding the fuselage if I'd be lucky to get spare pieces of the original shell... but that's for the future.

Attaching a cockpit photo from this summer - I just realized that I don't have any decent outside photos, but that'll be fixed later.

Your input on my approach and comments on my concerns would be hugely appreciated!

This email address is being protected from spambots. You need JavaScript enabled to view it.