A couple of years ago, I was giving a friend a first time ride in my Q-200.  For some reason, I had been unsure about landing on the 3,500 foot runway at my home airport, with the extra load of a passenger.

Due to my position, the tower cleared me for a straight in approach.  For whatever reason, I wound up flying a very shallow approach and dragged it in.  Well, I ran out of airspeed a bit too early and wound up hitting hard.  Real hard.  I know I scared the crap out of my friend. There was a big bounce, and rather than trying to recover, I applied power and did a go around.  Humbled once more, I asked the tower for the longer runway and I made an uneventful landing.

At the fuel pump I was talking to my buddy about the flight and I happened to glance at the right canard.  There was an awful wrinkle in the skin, a wrinkle so bad I knew the plane was grounded.  I acted nonchalant and didn’t mention anything about it.  We just put the plane in the hangar and went home.

I quickly got hold of Charlie Johnson a.k.a One Sky Dog.  Charlie conducts composite repair training for the Air Force and really knows his stuff.  With his coaching I made a very successful repair.

Here you can see the wrinkle.  Nasty. 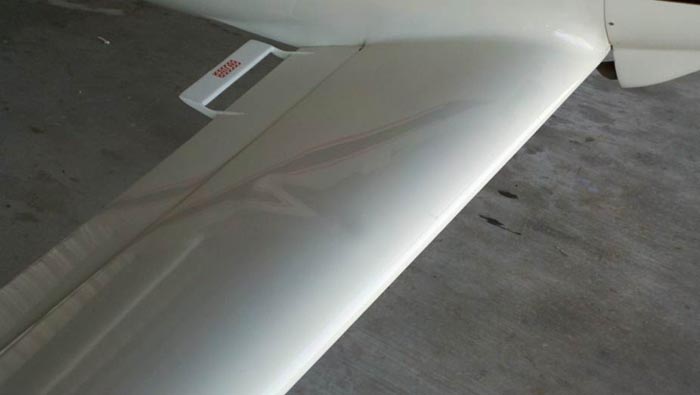 First, I marked out the area of visible damage.  It appears to go all the way back to the CF spar. 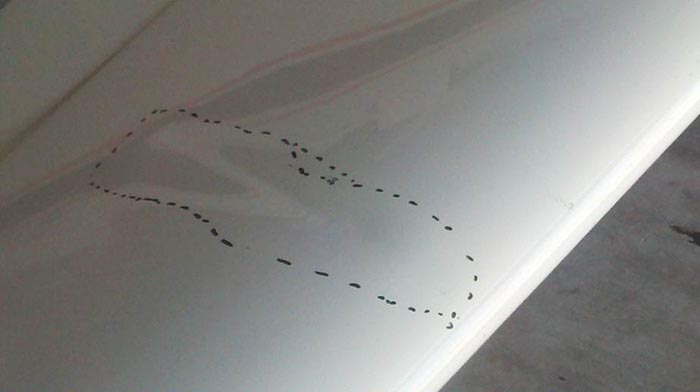 Next, I did a tap test.  Not easy for a guy with hearing aids.  I marked the skin as I tapped, and then connected the dots.  BTW – I use a dry erase marker for this. The inside line was the visible area of damage; the outside line is where I heard the area of the delamination. 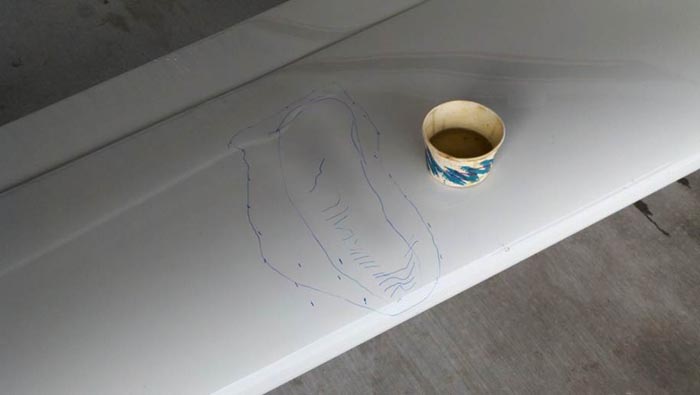 Took out my Dremel and opened it up.  It was pretty interesting when I peeled the glass off. There was a real crease in the foam.  When I touched it I could feel how much softer it was in the damaged area. 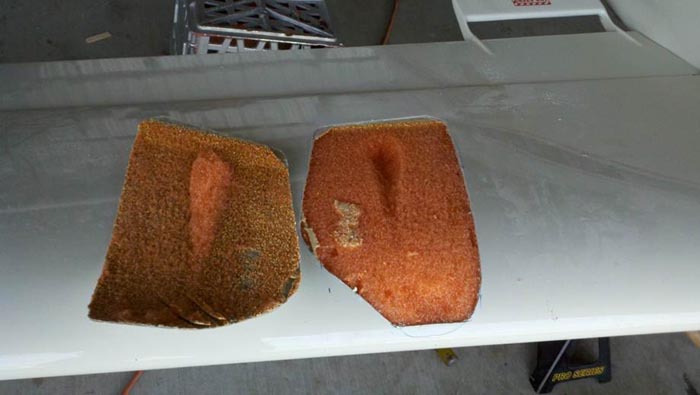 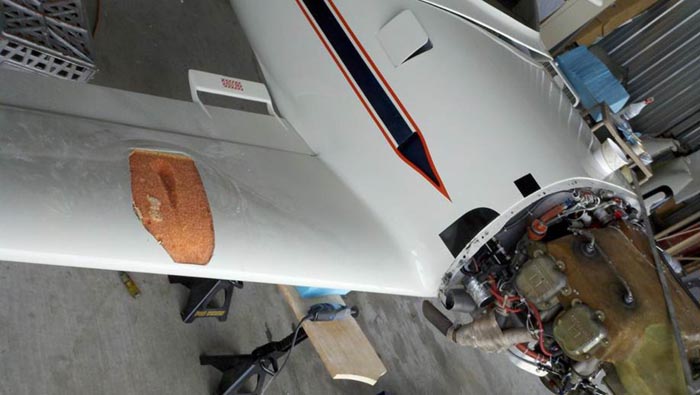 Next task – remove the damaged area. The problem is how far to go? I started digging it out, but at the same time, wondering how I was going to fit a plug into the repair area. I ultimately decided to go all the way to the lower skin!  Scary! 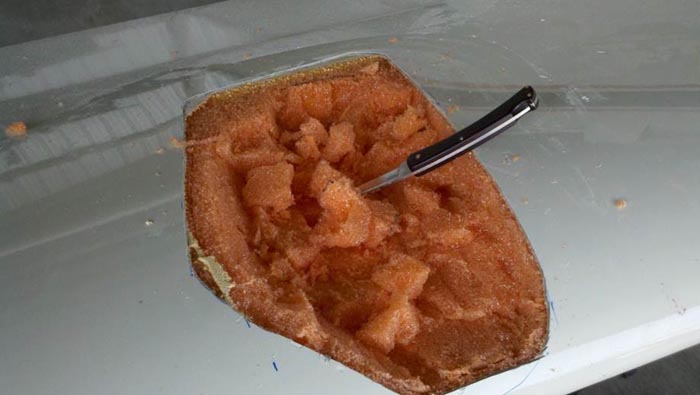 At this point I could inspect the spar somewhat. I tapped on it and as far as I could determine, there wasn’t any spar damage. 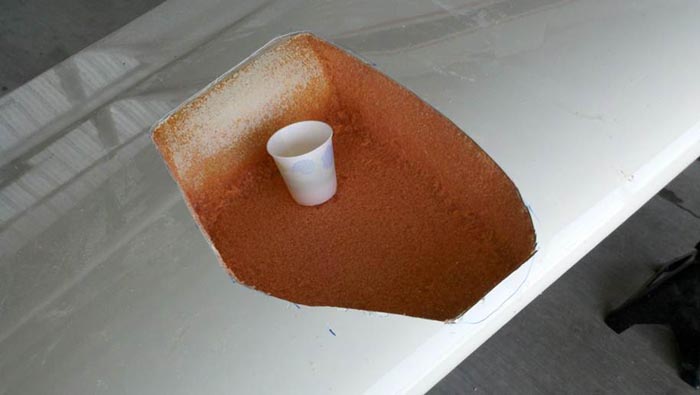 Now – what material to use to fill the hole?  I didn’t really want to use pour-in foam, since I know voids can develop and I wasn’t sure about making it consistent.  So, Charlie and I decided to go with a foam plug. Shaping was pretty straight forward, but it is tricky in the sense that you can’t see exactly how well it’s fitting against the bottom skin. 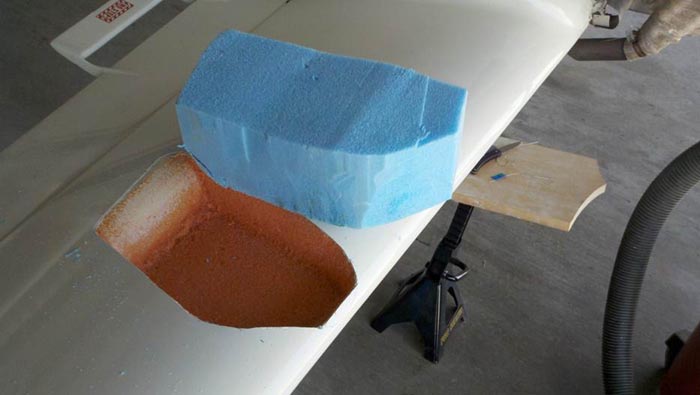 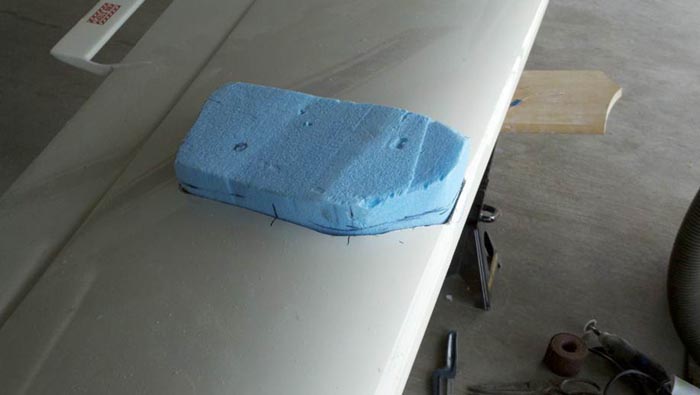 I decided to cut the plug in two so I could see the fit of each part individually. 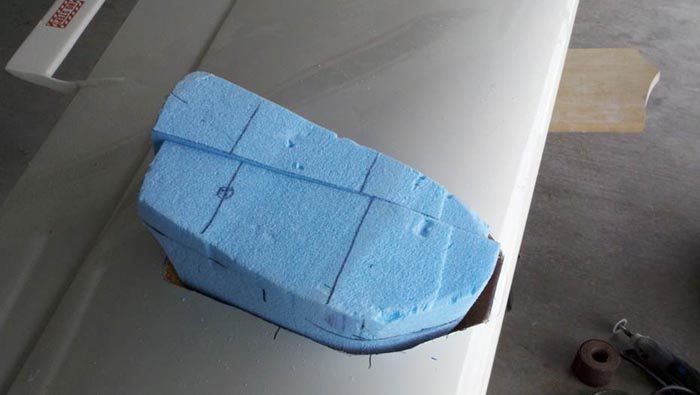 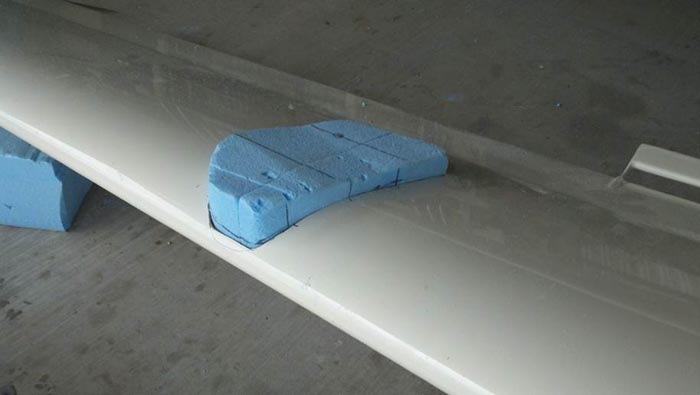 Now it was time to glue it into place. We mixed up a bunch of micro, slathered everything up, and then set the blocks into the hole.  As we were doing this, it was apparent that I was not going to be able to seat the blocks all the way in place.  The micro would not flow very well.  Panic set in.

My friend C-Rod suggested we vacuum bag it.  I just happened to have a vacuum pump in the hanger I had purchased off of EBay, so quick as a bunny we rigged up a vacuum bag system.  It worked really great.  It pulled the blocks down into place, and squeezed out all the excess micro.  It turned out the shot bag was unnecessary; the vacuum applied all the pressure necessary. 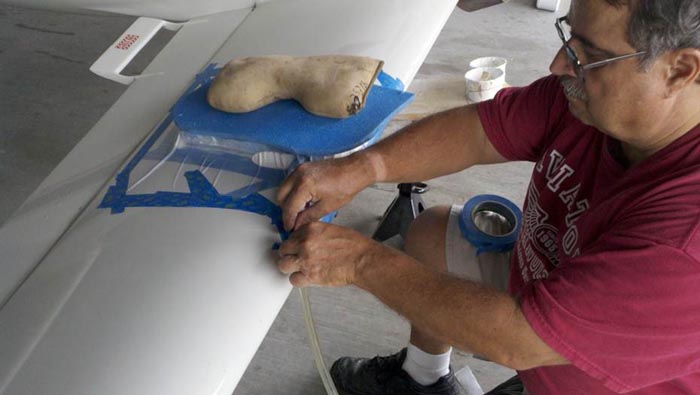 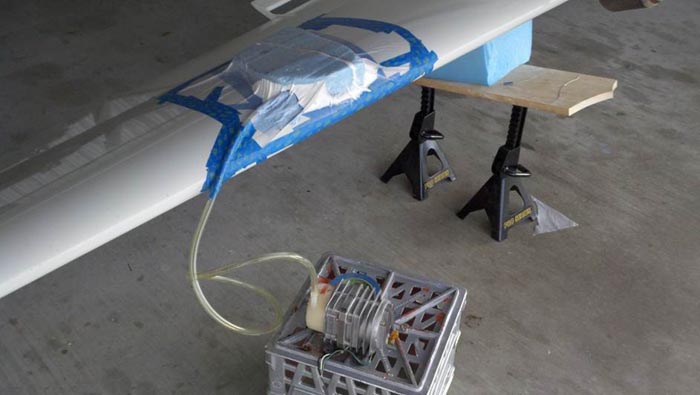 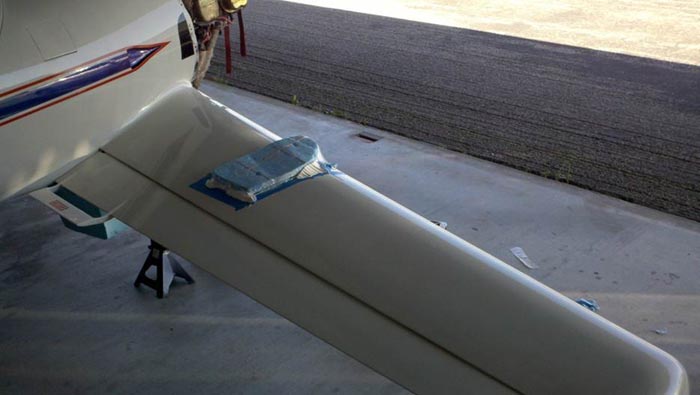 Sawszall time!  Time to start hacking away at the excess. 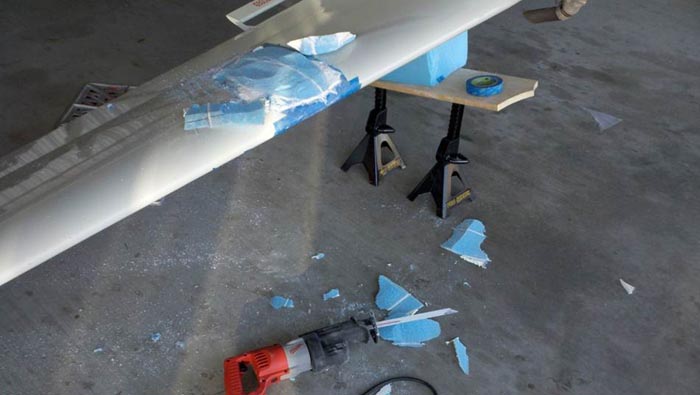 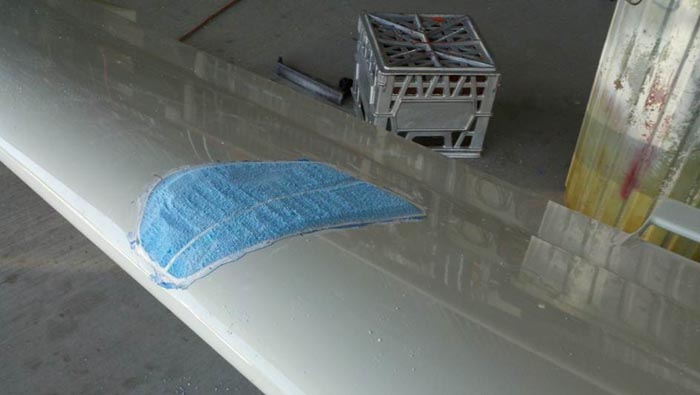 Before I start the repair layup, Charlie suggested I do a burn-off test to verify the plies on the wing.  I had never done this before and it was pretty interesting. You simply cut a section, and then hit it with a torch.  Everything burns off except the glass.  This was a nice test to confirm what I was already sure of. 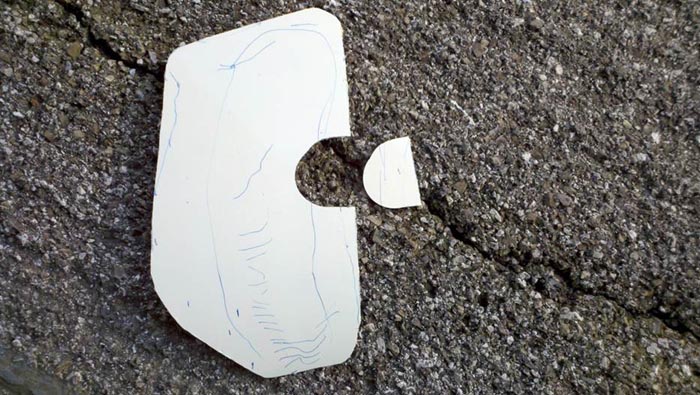 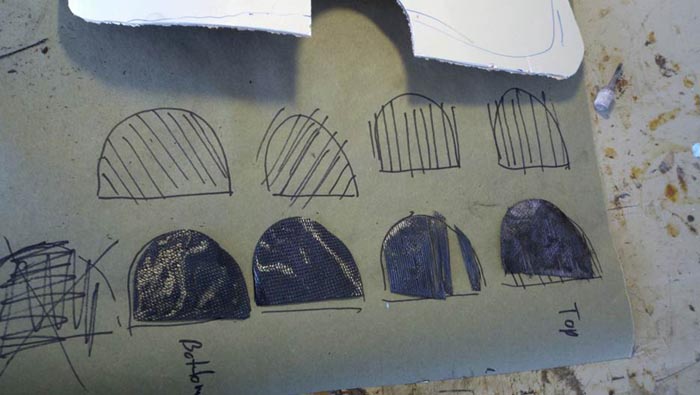 Now it was simply a matter of making the standard composite repair, back from Composites 101. 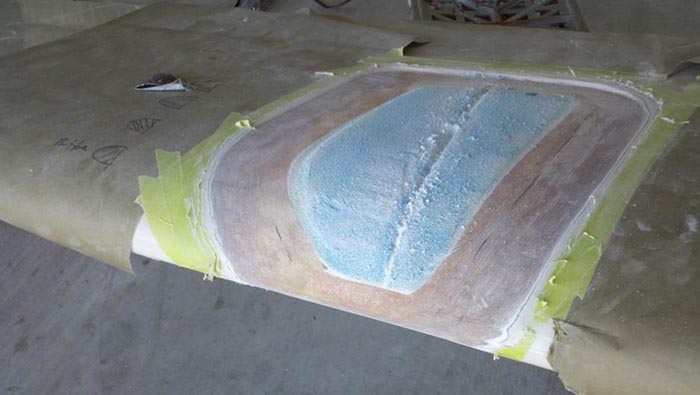 Area for the plies are marked out, everything ready for the glass. 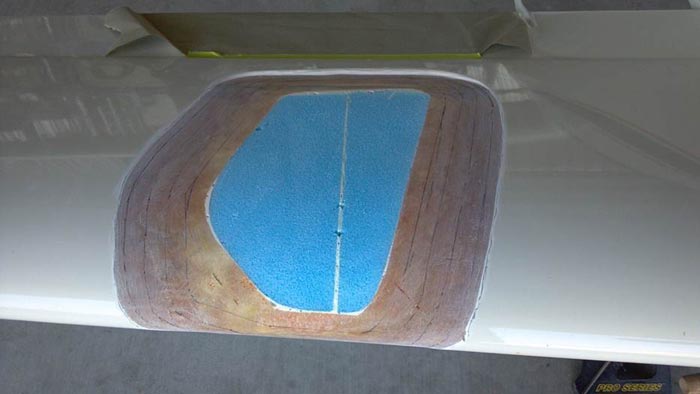 I made a paper template for each ply of glass.  This ensured I had the proper size, shape, and orientation of each piece of glass. Each ply had alignment marks, which corresponded to the alignment parks seen on the green tape.

An hour later, the repair is looking good. 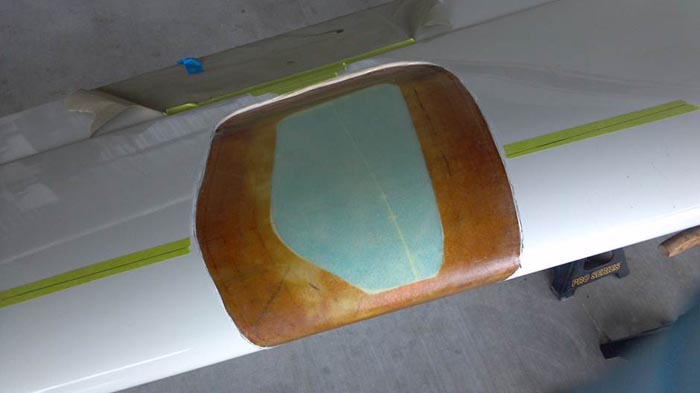 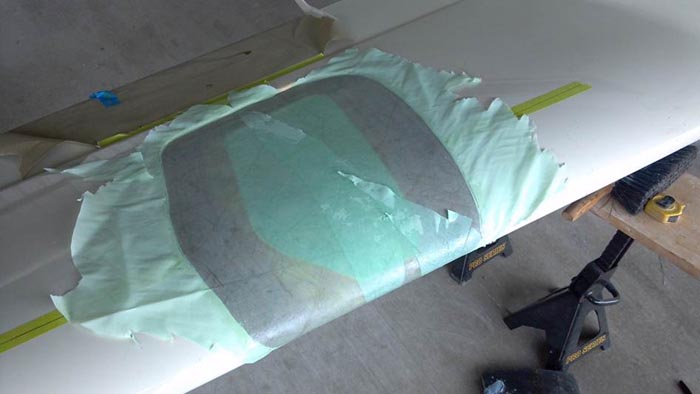 Time for finishing.  I used the Cory Bird method of applying a thick layer of dry micro, then sanding it off.  BTW, this micro looks red, because it was from some old epoxy I had laying around.  It was not the epoxy used for the laminates. 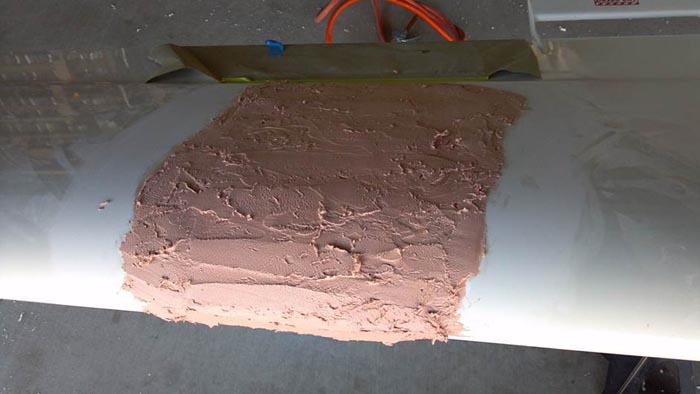 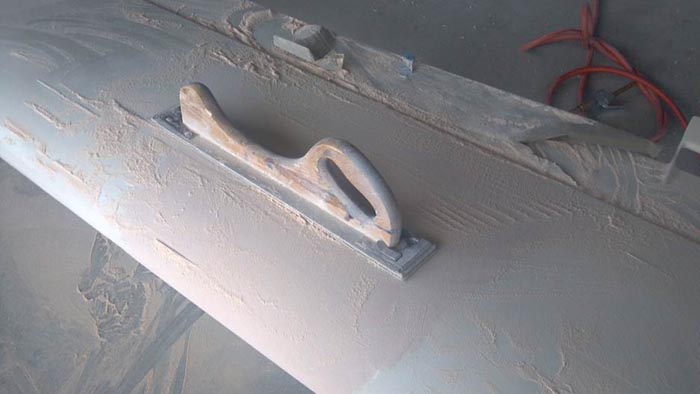 Vacuum it clean. Now all the air bubbles and scratches are visible. In the old days of Sand & Fill, this would have been a terrible task.  However, using the epoxy wipe method it’s no biggie.  You simply squeegee on a very thin application of pure epoxy.  Wait until it tacks up, about 30 minutes, then squeegee on another. Make each application as thin as possible. Repeat 4-6 times.  When it cures, flat sand with some 220 grit paper and when you done, you have a scratch and pinhole free surface that is ready for primer. 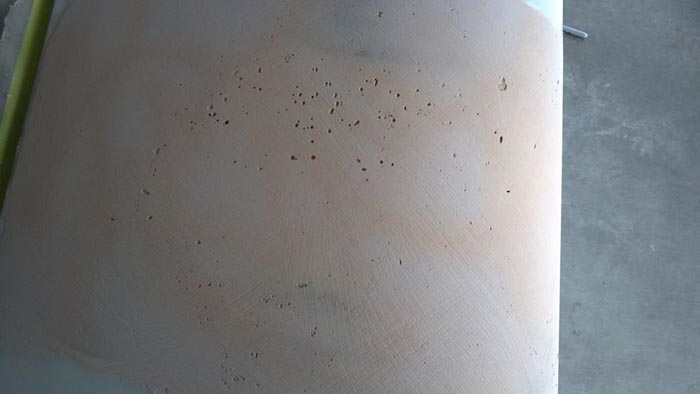 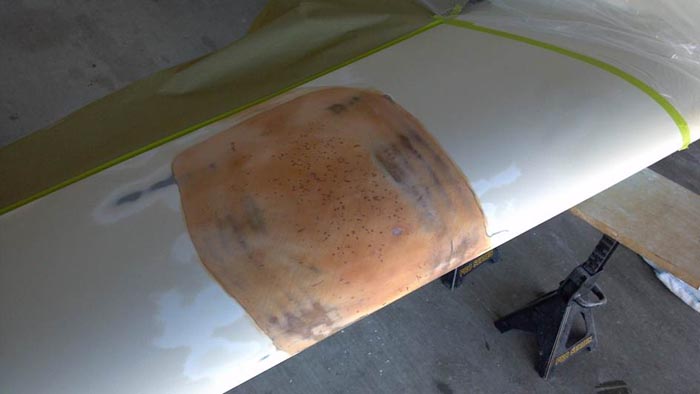 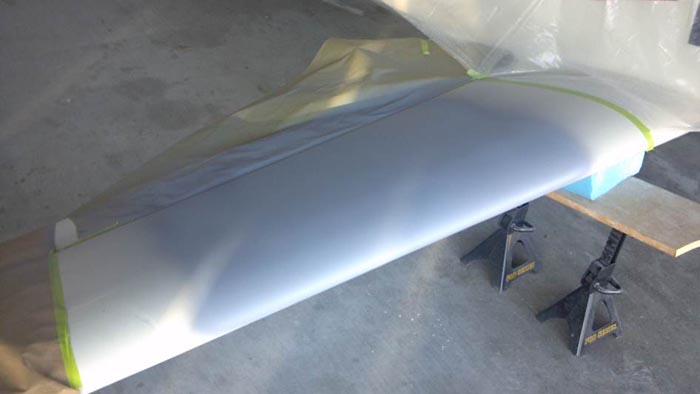 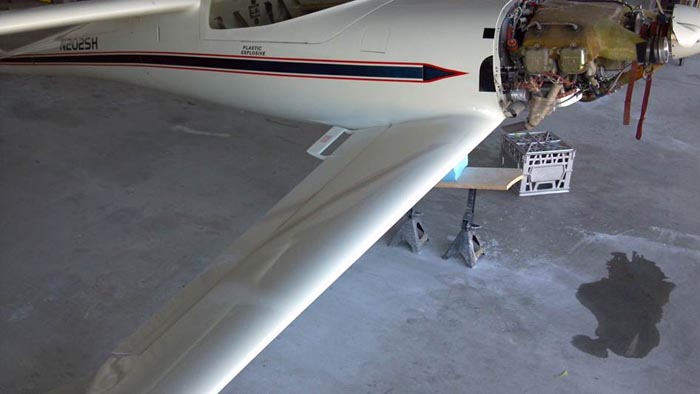 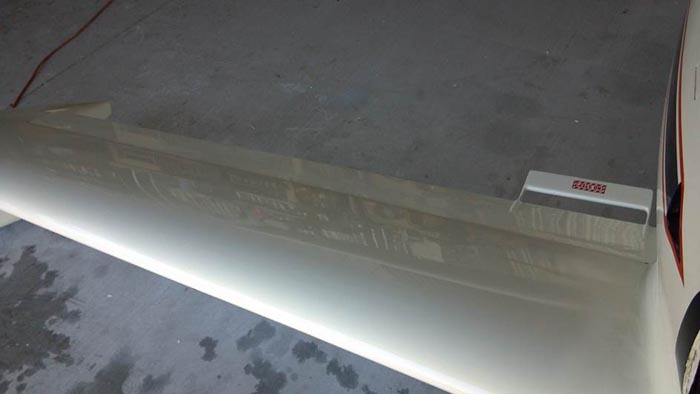 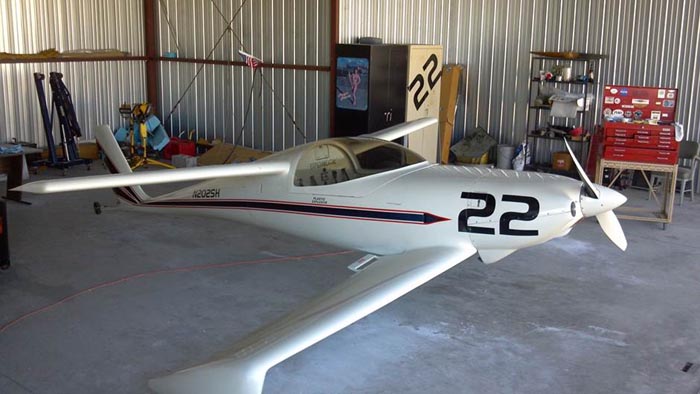 So, with a little help from my friends, I was able to get this done.  It was probably the best quality work I have done and was quite pleased with it.

As many of you know, I had an off runway excursion in August of 2013, which resulted in breaking my left canard. For what it’s worth, in that excursion, the repair to the right wing held just fine.