Before the first flight I had hopped the plane three times. I found that it would take off at 70 mph with full aft stick. On these hops I had the reflexor in all the way. In other words the trailing edge of the ailerons were up all the way. During the hops, the plane would rise a few feet and I would cut the power. The plane would then settle down and land.

During the first takeoff, the plane started to have a large angle of attack so I had to compensate for this with quite a bit of forward stick. I immediately started to dial back the reflexor so that the stick moved to a more normal slightly aft position. I climbed to 2500 feet at a rate of 500 to 1000 fpm with the engine running at about 3000 RPM. I then started circling the airport at this altitude getting a feel for the plane. The plane would fly straight and level with the stick in the vertical neutral position and the reflexor dialed back as needed. The problem was that I had to use a fair amount of force pushing the stick to the right to keep the stick in the neutral position. I will have to adjust the elevator differential control rods to fix this problem.

After about 20 minutes, I set up for a landing. On final I was doing about 80 and was able to dial in full reflexor while throttling back without having an excessive amount of forward stick. I skipped in the landing using aft stick and a bit of power without any big bounces.

I did this in almost calm wind conditions. The second flight a few days later was under the same conditions. This time I went to about 3000 feet. Instead of working on slow flight, I tried out cruise. I set the engine RPM at about 2500 and started dialing out more reflexor. As I dialed out a bit of reflexor, I would lose a little altitude but as the plane speeded up, it would gain it back. The RPM would also inch up a little bit. I did this until I was cruising at about 120 mph with 2600 RPM. I also found my cylinder head temperature and my oil temperature would decrease. While dragging the plane around at lower rpm and speed with a higher angle of attack, the cylinder head temperature and oil temperature would be higher.

I stayed up for about an hour. There is another airport about 10 miles away with a 10,000 foot runway. My airport has a 4000 foot runway. I flew back and forth between these airports knowing that I had a nice long runway in case something happened. On landing at my home base, I needed a little more power on the flare because I ended up bouncing the plane a bit. The good part was I did stop the plane in about 2000 feet.

A few days after this, I did a third flight. This time the wind was 7 to 10 knots and supposedly blowing down the runway. It was about 11 AM and it was nice and sunny. After taking off and dialing back some reflexor it started to get quite bouncy. I decided I had better stay in the pattern and just land. Things were quite squirrelly but slowing down and dialing the reflexor in I skipped in the landing with the right amount of power. Again I stopped in about 2000 feet.

So in the future I'll stick to calm conditions until I get a bunch of landings under my belt. I also think that skipping the landings is a feature of this particular aircraft. At a certain point in takeoff the plane oscillates on the wheels due to the flexing of the front wing and probably the wheel setup. I think this happens on landings also, thus the skipping.

It is pretty easy to judge stopping distance since you are stopped and can look around. As far as lift off goes, I am really focused on getting plane down the runway and up in a straight line. I assume the take off distance is around 2000 feet since I have hopped the plane three times on a 4000 foot runway. Hopefully it is shorter.

As far as pitch bucking goes, I haven't really experienced it yet. During my slow flight at 2000 RPM with reflexor partially dialed out for level flight, I pulled all the way back on the stick. The nose went up a bit but not much. The plane continued to fly in a comfortable attitude but I was descending at 200 feet a minute. There was no pitch bucking. If I dialed in more reflexor and got a higher nose up attitude, maybe I would get pitch bucking then. This may be due to the CCI vortex generators that were installed by the previous owner. If you look at the picture of the airplane, you will see the generators on the wing. They are installed in pairs with a template. You'll notice that only every other pair is installed. This is because of input from a dragonfly owner. He installed the full set and experience too much lift. On landing he would have too much of a nose up attitude. He took every other pair off and was satisfied with the results. He had a GU airfoil just like my plane. He installed the generators just to get rid of the problem of a dirty airfoil with the corresponding heavy back pressure on the stick to compensate. So it looks like he was right on for his plane and mine also. 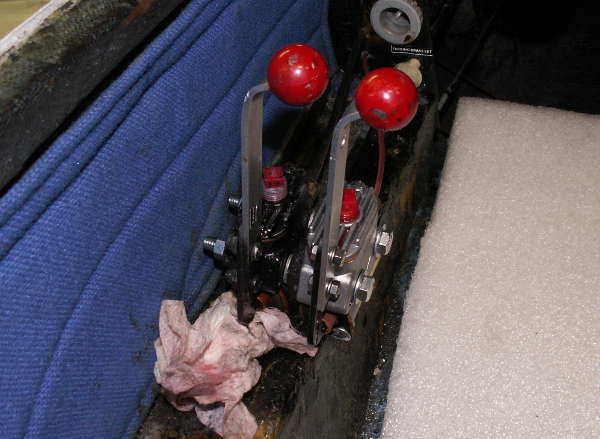 Another modification that I made to the plane was to add differential brakes. This is very easy to do if you have airheart hydraulic brakes. All you have to do is install a second master cylinder with longer bolts next to the original. You can see this in the picture. I then made a matching handle for the cylinder. I disconnected the right side brake line from the tee and use some brass rod instead of tubing to plug the hole. I ran tubing from the new master cylinder and used a coupling to attach it to the right wheel brake line. I have a hydraulic parking brake valve in the system. It is only on the left-hand brake now. It doesn't seem to be a problem. I use the parking brake for run up and starting. It seems to hold fine. The differential brakes worked great for ground handling and controlled stopping after touchdown.

I have the latest Revflow carburetor on this airplane. It has no float. The starting procedure in the Q2 POH has you priming the system for 3 seconds. Then there is a big procedure on how to clear a flooded engine. My Revmaster manual as a better procedure. You set your mixture full rich and throttle position with the fuel valve closed. You use one hand for the fuel valve and one hand for the start switch. You then start the engine spinning with the start switch and then turn on the fuel valve as soon as the engine starts spinning. I have had no flooding problems using this procedure. As for a good throttle position, when you shut the engine down run it up to 1300 RPM. Then shut the fuel off. Leave the throttle there for the next startup.

So everything seems to be going fine. I will write up another article after I get more time in the plane.