This year I fulfilled a dream to take our Q2 to Burning Man and gift rides. 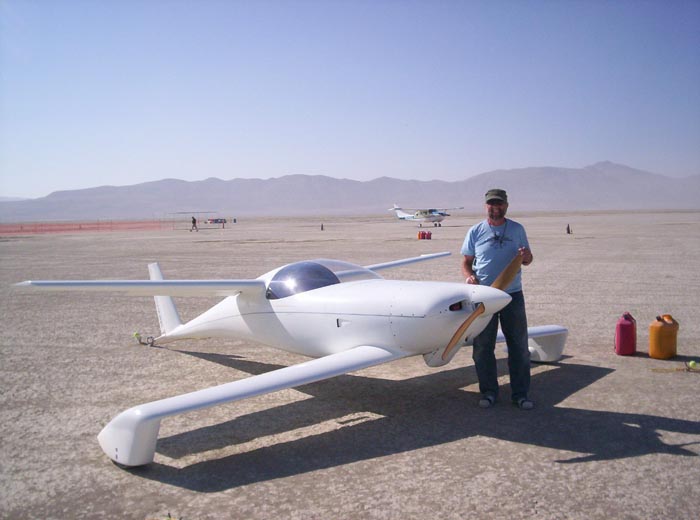 It had been 8 or 10 years since I had the engine off the plane and I figured if I was going to be taking Burners for rides out of a playa dust strip with high density altitude I should give it the once over. Turned out the compression was low in a couple of cylinders even though it seemed to be flying OK.

When I starting pulling her apart, the biggest problem found was the exhaust pipes were rusting through again. I've always kept them wrapped which has been good for all the wiring and controls under the engine. What I have found with the mild steel pipes is where they are wrapped good they don't rust. Even after 10 years some of the metal was blue. But where they weren't covered in a couple of small areas, the rust had eaten so much I could punch a hole with my fingers. The final pipe was easy to see it slowly rusting and getting shorter but the other areas I couldn't see without taking them apart.

The kit was bought in 1981, finished in 1984 and I've rusted through two sets of steel pipes. I ordered a new set of SS pipes from Revmaster which almost fit OK. The biggest problem with them is the turn coming off of cylinder #3 isn't as sharp as the original kit ones and I had to flatten the tube to get some clearance between the tube and the firewall.

Off came the engine from the airframe and removed the mag. The local shop went over the mag but I found out that the single drive Bendix dual mag isn't made any more and parts are scarce. I wanted new wires but they didn't order them in time for my trip but they did find a hairline crack in the distributor block and put the last one they had in along with a new capacitor. 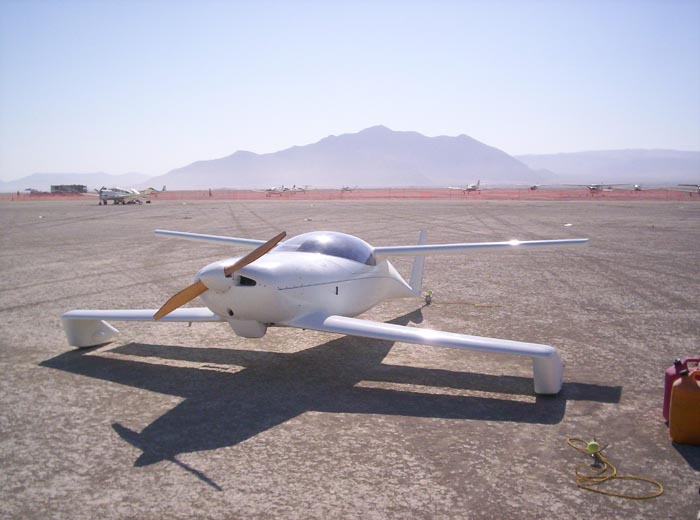 I had the valves redone but the guides were fine. The one thing I wanted to do this time was go through the Revflow carb. It's always been fine except the 0-ring groove in the mixture valve stem was not to book spec and would drip gas while idling at full rich when the o-ring got old. I ordered a new actuator strap, valve stem, and o-ring. Redoing was easy. It's unnerving what little screws hold it together inside.

Putting it all back together went straight forward along with the work to fit, cut, fit, cut, fit... the new pipes and having the collector welded on. The engine fired up OK but started running very rich. I adjusted the slider needle which made it idle OK but when I went to fly, it was too lean and I had to go back the other way. It's pretty much back to where it was but is still on the rich side.

Long ago, I put exhaust valve rotator valve spring retainers thinking the faster spinning valves would make them last longer and they did. But after doing the valves again and flying for a while I think I have been way too aggressive in my leaning. I've been running much richer and the compression is not going uneven like it used to.

I gave the airframe an annual and everything was OK so I put 30W non detergent oil in for the test flights which went fine then changed to normal 20-50 oil for the trip. The engine does have more power than before. You don't really notice when it gradually goes away. 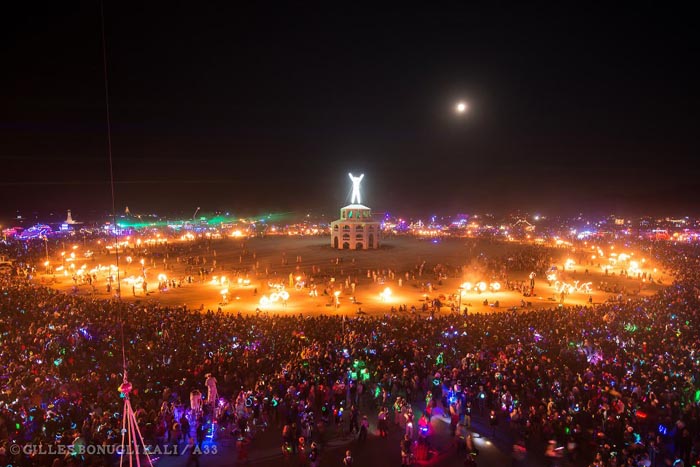 And now for Burning Man. The trip across the Sierras was beautiful during the afternoon with little turbulence. I landed at Stead by Reno for the night to see our Son in the hospital there after he hurt himself when a bolt broke on a dome he was building at Burning Man and dropped him 15 feet.

The next morning flying to the festival was perfect and seeing the Black Rock City for the first time from the air was fantastic. You brief yourself before going there on the BM web site and they give you an information call sign so they don't have to go through it all when you call Unicom. It's different every year. This year it was information "Heavy Breathing". Another year I found out was "Whiskey Breath".

I had been worried about flying such a low hanging wheel pant, small wheeled plane there might get me in trouble and it can but it is doable. Landing on the playa on the fairly new runway was easy and felt cushy in a bumpy sort of way. The taxi back is long and you do have to watch out for soft spots. The biggest problem for the Q2 was having one wheel stick in a soft spot while going slow and drag the tail wheel around it. On asphalt, the hard rubber just slides but on the playa the wheel can catch and put a large torque on the tail spring. 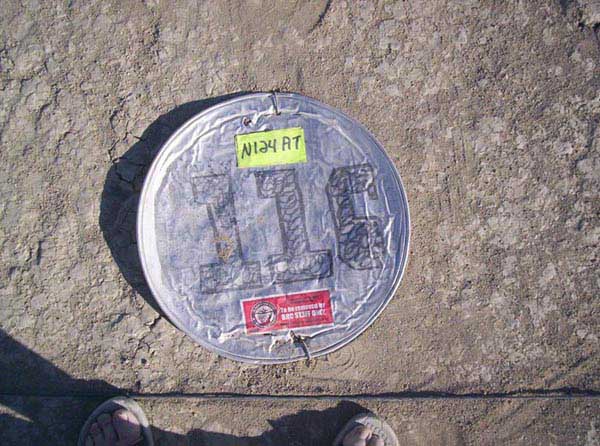 I found a place to park with help from the airport volunteers where I had a clear area to taxi to and from the runway. By the way, the "runway" is a fairly smooth part of the playa that’s been marked by cones and a chevron on either end. Some watering and rolling is done but it gets rougher as the event goes on especially where the planes touch down. It's a mile long or more so I started taxiing down a way before getting on for take-off to miss the roughest part. I was amazed, towards the end the little plane would take an awful rattling but everything held together.

Before you can start flying rides, you have to have a briefing about the ins and outs of high desert flying. Afterwards, they give you a wrist band and tell you to use information "After Glow" when contacting Unicom. They also instruct women Burners looking for rides to not give any "favors" to anyone who offers a plane ride unless they have the coveted wrist band or they could be screwed twice. 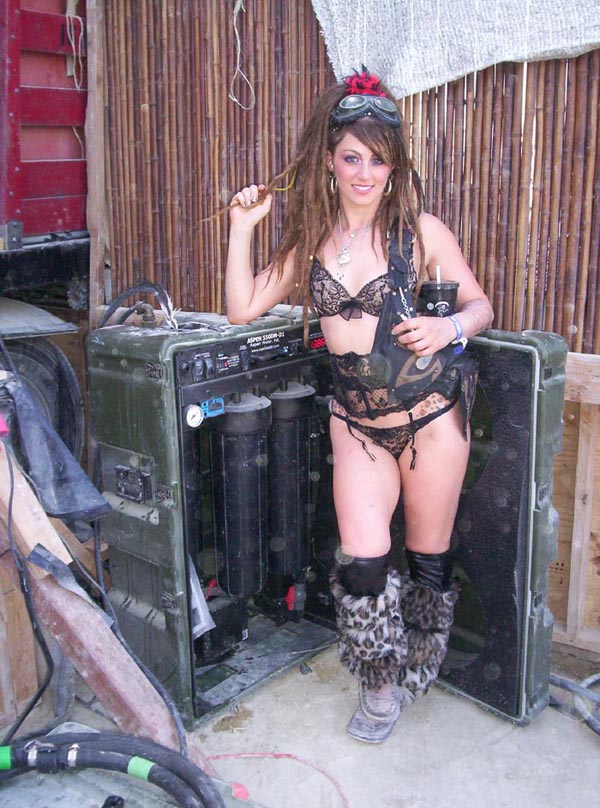 Most of my passengers were light beautiful young girls as the density altitude can get over 7K when it gets hot, but I did take one over 200 lb fellow pilot (I'm over 200 lbs) with no problem. He was gifting rides in a powered hang glider and we swapped rides. To tour the city you climb to 5500 feet, then approach and circle clockwise just outside the trash fence. All climbs and descents are done well away from the pattern. There is a sharp ridge just to the south that peaks at 5500 feet so I would play around with that to give some thrills.

It gets really busy in the mornings till noon so you have to watch out. Fortunately the ultralights use a lower pattern. I was worried about the playa dust getting into the engine but found it's no problem. The dust is so fine and non-abrasive that it just doesn't bother engines but can clog filters. It wouldn't even scratch the canopy which I had to clean every flight. It will remove any oil and leave metal open for corrosion. 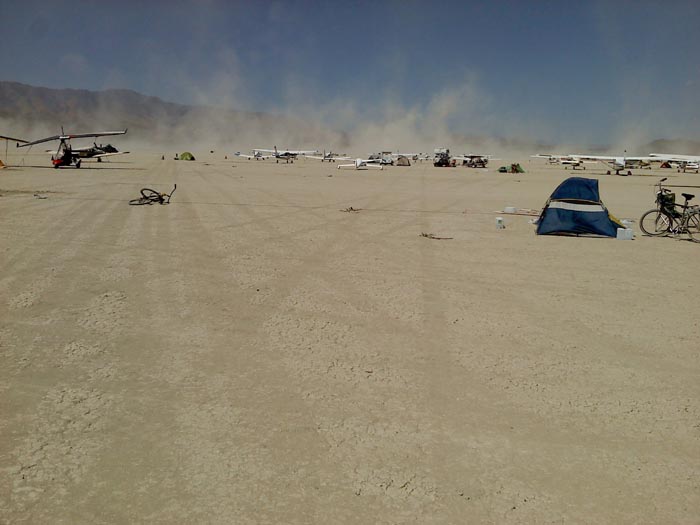 The dust clouds are really impressive and all vis can just go away in a moment but you can see it coming. One no-no is to jump in front of someone on a long final and take off as you leave a big cloud of dust that completely obscures the runway and makes you go around. I saw several pilots do it and one did it to me. I tapped his wing tip as I was passing him just to let him know he was a douche.

At the very end, two days after BM ended, the FAA sanctioned airport shut down and all the playa was an "airport" again. When I went to leave it was almost just me and the desert left so after my preflight, I just picked up the tail, turned her into the wind, got in, fired her up, looked around, and took off from a standing start. There was a good wind blowing and with no passenger the plane took off before I did. 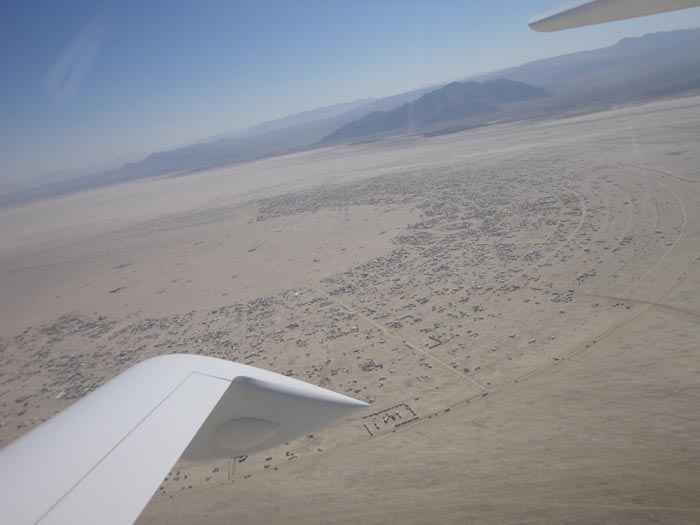 The weather was perfect for flying back to the Bay Area with a stop at Truckee just for fun. I tried to clean the dust off my feet in the bathroom at Truckee but instead left muddy foot prints all over their polished floor. So sorry.

Other that our son getting hurt the whole thing was a dream come true. The Q2 is still an incredible airplane even after 28 years. The other day, flying low in cool air over the bay, at 3500 rpm I was indicating 184 mph. She still has it in her to give people the ride of their lives! 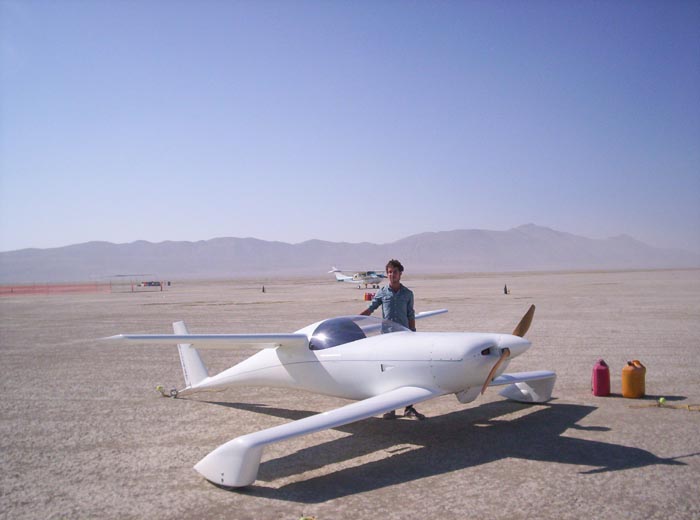 Our Son after two operations to pin the bones is his face and wrist back together and broken jaw wired shut made it back to Burning Man just before the last weekend to the cheers of all his friends. The picture above is of him standing next to the plane.