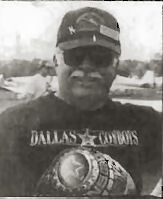 Grits! Can you believe it; somebody in Oshkosh has finally discovered grits. I found them on the breakfast menus at the University's Blackhawk Commons dining hall, Shoney's breakfast bar and at Hungri's, a greasy spoon dive across the street from Gruenhagen Hall. This is a real breakthrough in interregional understanding. Those of us who annually look forward to Wisconsin's dairy cows, bratwurst, string cheese, magnificent pizza and beer farts appreciate the appearance of this small reminder of home. A day without grits is a day without sunshine I always say.

It saddens my heart to tell you that I sit here writing this at home as Oshkosh has 3 more days yet to go. Yes, I was there, but the gods conspired against me and I could only roam the flightline 3 days. This is not enough time for me to link up with enough of my QBA compadres to hear the tips and progress reports I enjoy. But it will just have to do and besides I wasn't feeling very well so its better to be home.

This business of starting the EAA Convention on Thursday is a bit goofy and takes a little getting used to. Goofy or not though, enough of the faithful arrived by Wednesday evening to close the field to all transient arrivals except for show planes. Keep that in mind, guys, that if you are in your homebuilt they will always accept your arrival despite what ATIS may say if you just announce yourself as an experimental.

There was some late arrivalitis this year, some of it high profile. After a fury of pre-show string pulling, a 8-2 Stealth Bomber arrived off schedule in the middle of an airshow act and had to hold over the lake a while before making a single moderate speed pass and departure. Weird, man. At one point I blinked and it looked like a black plastic garbage bag riding a dust devil. And then the Concorde arrived several hours late due to (as the rumor went) a woman having a medical emergency just after departure in England. An absolutely beautiful plane whenever it arrives though.

And the Q guys were tardy too. As I hit the line on a bright, cool CAVU opening morning there were only 3 Q-200's and one Dragonfly parked in position. Disappointing. But they kept slithering in as the weather worsened over the next day and a half until by Saturday night I recorded 7 Q's and 3 Dragonflies (one of these was Reg Clarke's gorgeous and successful direct drive Subaru powered bird). Most of our guys are repeaters and here's who they were:

Most didn't see Harris since he was camping way on down by the curvature of the earth at the ultralights.

QBA FORUM - Our 9 a.m. Saturday QBA meeting on the back porch of Homebuilders Corner was well attended, some 26+ folks, and lively. It passed too fast and should've been reserved for 2 hours. As we did the round of introductions I was pleased to hear the number of builders who are heading for the goal line and expect to be flying soon. I hope that brings some unfamiliar birds to the next Oshkosh. A fair amount of time was spent by experienced pilots in explaining landing quirks to the guys anticipating first flight. And as a result of several discussions I hope to be getting further details on how Varga modified his pull-start O-200, where Dick Shapley got his new set of stainless pipes for his O-200 and I hope to hear great news from Jon Finley who has a full-sized 1800cc VW engine ready to fly on the front end of his Q-1. All he's waiting on is an N Number. For those of us "gray" eagles who may be looking at "medical condition" in the eye someday, QBAer Hank Hurd, M.D. , briefed us on losing his medical this year and getting it back again. I hope to get the title of the book that he used for advice as well as write some helpful tips he told us.

Spud and I did not have an organized banquet this year. That was a bit of pressure off of us. We'll put the energy savings into Ottawa. We'll rethink it for next year since we had an awful lot of guys looking forward to a joint dinner.

EAA/OSHKOSH OBSERVATIONS - I had the chance to walk around for 4 hours with someone who hadn't been to Oshkosh in many years (this was my 22nd time). Seeing the show through his eyes was stunning. Oshkosh is not just for the sport aviator anymore. This is an event of aviation excess ... and it is pulled off each year with planning and organization that is a marvel to behold. It is a wonder of the world that you must treat yourself to at least once in a lifetime (and soon, before it takes over the whole of Wisconsin).

A large number of vendors cater to the general aviation market at large and in fact the big iron of Beech and Cessna (Caravan, King Airs, Citations) have been part of the static exhibits for several years now. Look out for trouble because GMC bought space to tout their trucks via a large tent with a rock and roll band doing several short shows a day. A lot more non-aviation companies may not be able to resist a gathering of 700,000+ citizens on a buying spree and the EAA surely won't resist the revenue potential. So along with the slicers, dicers, juicers, rag mops, silver jewelry, painting and sunglasses, you may be seeing a car and boat show to boot. Be still my heart.

There was lots of heavy iron in the air for a show whose bloodline began with homebuilts. Besides the aforementioned B-2 and Concorde, the Sunderland flying boat made some nice passes along with a nicely restored South African Airways DC-4 Globemaster III wowed the crowd with low passes, and short landings and backing into its parking spot. This is the newest plane in the Air Force inventory.

There were the 9 Corsairs celebrating WWII/Pacific, the Family Channel Blimp, the 30+ T-6/SNJ formations and the new fascination ... jets. Canadian jets, French jets, Polish jets, Czech jets, Russian jets and even the BD-10. Most of them were trainers and, more often than not, VERY strange looking for one accustomed to Western designs (probably powered by low grade vodka).

Geeze, I hope I'm not getting jaded but it seems that all the hoopla in the homebuilt pits has been taken over by the fire-breathing biplanes and the $80,000 Glasairs, Lancairs, Wheelers, etc. Used to be a guy could get himself several kit choices for around ten grand, but the high rollers are coming out of the woodwork and the little guy with 10k is getting pushed down the road toward the ultralights. And don't kid yourself that a 10k RV-6 kit will put you in the air much before the cash register hits 25 grand. Nevertheless, I began detecting more choices coming in the 4-place sport plane as well as some healthy momentum building in successful auto conversions. Don't stop holding your breath yet, but start paying attention. Jim Bede is making rumblings about a fat, 4-place BD-5 called the BD-14, though 10 years ago he had a static BD-7 which was the same thing.

It seems to me that the new wave starting to form up is that of the 4-placer. Besides Bede's proposal there were others. Somebody put a set of Mooney wings on a composite fuselage (I forget what he called it); composite guru Andy Marshall had his high wing Stallion on the line; there was a Mooney-sized metal ship, very nice lines, called the Eidelweiss from overseas and Cirrus revealed "the secret of Hangar X" its 4-place, low-wing SR20. Then there was the Lancair IVP for the thin air types. None of these, unfortunately, were for the thin wallet types.

And then there was this enormous, white homebuilt stealth fighter lookin' thing with an itty bitty 2-cycle on the front end. It had one seat but looked like it could seat nine inside its tent like shape. What the hell WAS that, and did anyone get a picture? It was surrounded by a crowd every time I walked by.

I would be remiss if I didn't mention those pesky wristbands we had to wear to gain entry to the flightline. Until this year we got cardboard medallions on a string that we could hide on hats, belts, shirt buttons or even make into badges to confuse the gate guards. This year he had these hospital inspired appendages, which an EAA analysis figured to gain them 15% more in revenue. Apparently there's been a lot of passing of flightline passes thru the fences.

As ever, an interesting show that is pretty darn addictive.

You can order a PDF or printed copy of Q-talk #46 by using the Q-talk Back Issue Order Page.