Remember the Q-2 George Koeneke was giving away in QT #21? A guy in Dallas got it and I saw it recently. Deal of the century! Workmanship looks good and it's all together sitting on its wheels with controls, brakes hooked up. Needs interior and Revmaster hooked up but it has the new canard if he wants to trade the Rev for an 0-200.

For the first time in 10 years, this Q-TALK, due July/Aug, will be a late one. It's due to "an accumulation of tolerances", as we say in airplane building jargon. I hope your tongues haven't dried up from hanging out waiting for this one. I'll do better, but really it's just a lack of motivation this summer and maybe a little bit of the following:

Early August I got a 386SX computer on a 60-day trial. It turns out that this is like giving a Thompson machine gun to a kid who only wants to go out and play soldier. It's much more than I need now and my mind is bent into a pretzel trying to set it up and learn how to make the programs go. I'm still going to have to paste this one up since I can't get Word 5 to send it to my printer as I want it ... and ...time's a wastin' and you're a waitin' 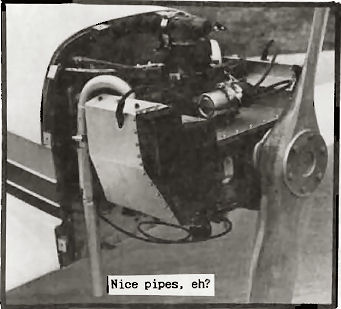 Remember Beard's fatal crash at Palo Alto a year and a half ago? It seems that he had installed an Ellison throttle-body injector on the engine. The plane was seen to depart the field the night before with a "real rough running motor". He crashed on arrival the next morning. The FAA report (so I'm told) attributes the crash to engine failure due to carburetor ice.

I need a favor. My Konig engine, with well over 300 hours in my Quickie, is nearing the end of its life. If I choose to resurrect my plane, I must do something and the much more powerful Rotax is the only way to go. How do I contact Jinx Hawks and/or Brock McCaman who, I understand, have plans for the conversion? I've gone through the newsletters, but somehow missed a phone number or address. No rush, the Rotax 503 I have access to is still flying on a Kitfox and will be until the owner upgrades to a 532 or 582. Incidentally, flying a Kitfox is a blast.

ED. NOTE: After sending out more than 50 sets of conversion "suggestions" over the last couple of years, Hawks and McCaman have reached the limits of their time, generosity and responsibility to devote to spreading the Rotax gospel. They never did it as a moneymaking enterprise but only as a sharing of knowledge and experience. They got caught by surprise in the storm of interest, which they handled very graciously for some time. But now they want to get on with the rest of their lives. Respecting that, I will let interested parties dig out the address/phone for themselves from the Kitplanes article or Q-TALK. If any of the many guys that got the info "packet" want to step into the breach here and be a copy source, raise your hand. 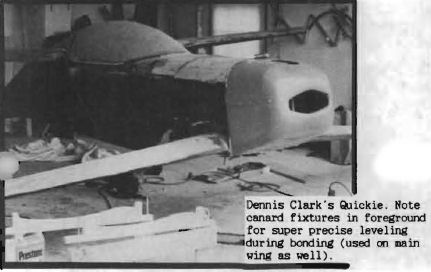 Sometimes I think some people believe the QBA is a far-flung international organization housed in a concrete and glass skyscraper in the heart of Dallas. El Wrongo! Here's the business end of the QBA. Mrs. Masal has threatened serious consequences if any of this junk spills beyond the confines of the entry doorway. Anyway, here's where it all comes together. Impressed? 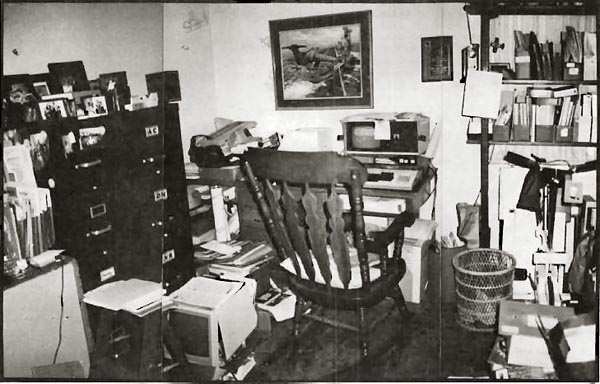 You can order a PDF or printed copy of Q-talk #22 by using the Q-talk Back Issue Order Page.