I peeked out of the curtained window of the Springfield Red Roof Inn room to get a preview of the morning. "Mighty nice" I thought to myself. I clicked on the bedside radio at 7:23 just in time to hear one of those overly rambunctious deejays say, "You won't wanna hear this, but I hafta tell ya. There is a line of severe thunderstorms moving into southwestern Missouri and the National Weather Service forecasts showers for the Joplin area (70 miles to the west of Springfield) after 7:30. That's 7 minutes from now, folks, so set your watches."

"Yeah, right," I thought (I had just looked out at the sun), another goof at the NWS forecasting the weather from a windowless room. It was about time for all this stuff to end. The afternoon before, 3 of us cancelled a Bonanza trip out of Dallas when the skies got mean 'n nasty 'n wet. We drove 2.5 hours northbound before it turned dry and gray. We weren't singled out for special treatment. It turned out that the weather gods deposited a wide band of gunk through the entire U.S. midsection. There wasn't an easy airpath into Springfield from any point of the compass.

So Saturday morning's brightness was welcomed.

A cheerfully chattering group of QBAers gathered outside their rooms and ambled on over to Shoney's for breakfast. Tables were pulled together, hot coffee was poured and we settled into some animated talking and eating. We barely noticed the falling darkness outside. We got to the airport an hour later under a moderate but active overcast. We hoped to see Q's parked tail to tail everywhere, but saw empty concrete instead. The show went on anyway.

For the second year, Springfield weather did not cooperate. It looked grim, but, ya know, I think nobody left disappointed. I hope some of you attendees will write if I'm only imagining this. We had 3 resident Tri-Q's to examine in detail and a very interested group of 20-25 people. We spent much more time in group discussion than last year. This was very productive because, unlike a forum where some who are wallflowers tend to shy away from asking questions, everybody gets comfortable in a small group and much more information flows. We got rained on, but not rained out!

Our airport meeting site is the first row of T-hangars at the northeast corner of this moderately busy field. The hangars are up on a terrain rise that overlooks the north end of the main runway. This adds interest as you can watch the commuter carriers taxi by for take off or grade their approaches and landings. This is a natural pastime for all pilots and often generates interesting banter.

We started our day off by snooping around the home town. Tri-Q's then assembled for general discussion. This soon focused on the beautifully refinished airframe of Ron Whetsten's plane (it's not flawless, but he'll have to personally point them out - it's that good!) There was lots of discussion of what Ron did to get it that way. Several points of interest: Don't work on individual "spots" when contouring an airfoil. Best is to slather your micro over the whole half span and sand one end to the other. Ron used the plans' spline but careful use of a linear air file or even a 6 ft sanding board with cemented on sandpaper were also suggested by others. Ron used Dupont Uro-Prime in place of Feather Fill. He says it's 3 times as expensive but easier to sand and fill pinholes. Also in the "Great, but ain't cheap" category was the microspheres available from the West System folks which are much lighter than we use but $$$.

When we broke from our morning rap session, Delores Langley, Pat Carter and Patti Whetsten spread out a fine lunch for us (with able assistance from Jim Langley and Ron on the barbeque tongs). Just to be sociable, I ate anything that was left over.

To shake everything down, Ron and Jim got us involved in doing a weight and balance exercise on one of the Tri-Q's. They had just bought a set of new scales for the local chapter (supposed to be all the rage), and wanted to try them out. These were mentioned in a recent Sport Aviation as reasonable in cost and accurate to 1 pound. They are based on 3 bathroom scales with 3 fancy welded up frames, which are set on the scales to properly distribute the weight. This exercise was a bust! With the assembled brain power of 15 critical rubberneckers, nobody could figure out just how to make the scales weigh within 40 lbs of each other one time to the next. 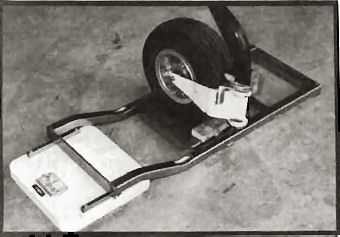 If these are reliable scales, there must be a trick that 15 guys couldn't figure. Keep us informed Jim and Ron, OK? 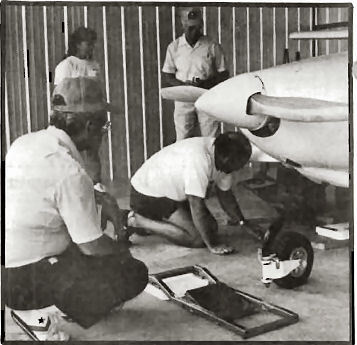 Anybody with a Tri-Q or Revmaster was in the right place at Springfield. For the Q-200 guys, our surprise, secret guest was just the ticket. He turned out to be Ted Vanlaningham of El Reno Aviation, a very experienced, knowledgeable and UNDERSTANDABLE A&P. Ted did a show and tell on El Reno's oil filter adapter; FAA/PMA approved for the small -12 and 0-200 Continental engines. Selling for $189.95, this is a full-flow, spin on mod that eliminates the need for external oil lines, gives you the option of removing the engine oil screen and adds oil cooling by convection to boot. Ted matched one up to Nauman's Q-200 and Sun 'N Fun to confirm that it fits. 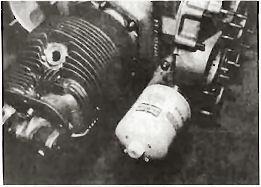 Ted also talked carburetion for these engines and at some length about magnetos, specifically the differences between the Slicks and the Bendix. He even took 'em apart so you could "see for yourself". Ted much prefers the Bendix (now owned by Continental). To start with, it's shorter for easier access (It also happens to be wider so the builder would need to plan his mag box change early on). Other comparisons to the Slicks that Ted mentioned: Bendix has twice the spark power, is rated for 2,000 hours service (vs. the 1,000 hr Slicks or 800 for the '64-70 vintage throwaways), fewer parts are required to be replaced during rebuild and these parts are cheaper to buy. Quality: Bendix has steel gears and even outside case screws are harder, aircraft grade bolts. The Slicks are, however, 3/4 lb lighter and have a lower initial cost. Ted mentioned that El Reno (1-800-521-0333 OK) bought out an inventory of non-certified Bendix rebuilts that could be used on experimentals at a savings.

On carburetion, Ted thinks the Marvel-Shebler carbs are just fine for our engines. He mentioned the history of the metal floats vs. molded floats and prefers molded. Either type eventually will absorb fuel and sink, but the molded float sink happens more slowly and shows symptoms of poor idle and leaking after shutdown. MF stamped on your carb means you have a metal float.

Ted had more good wisdom to share. He pointed out that the small Continental's are 1940's technology. They are not precision instruments. They are not manufactured to sports car tolerances. They are not efficient. BUT...they WILL do what they were designed to do, as specified, and they will do it reliably. If Continental says to expect 1200 hours TBO and you operate it to specs, you can count on it. Ted also pointed out that these engines are very simply built and that most people with a reasonable mechanical sense can work on them successfully. Ted says he'd be happy to work with individuals. Just give him a call at El Reno.

As we took a stretch break after Ted's session, someone hollered, "Hey, a Q-2 just landed out here". The weather had improved dramatically after lunchtime and this guy had slipped in unnoticed and was just turning off the runway. It was Malechek and son Steve who must've been camped out on an FSS desk just waiting for the briefest break in the weather. They were a sight for sore eyes. Bob has over 400 hours on this still beautiful bird and thinks he may have given that many rides so far. He said he had some stiff crosswinds on the runway and was happy to know that no one saw the landing. As our guys started examining his Q, he indicated disappointment that the winds wouldn't permit any rides.

The day broke about 5 p.m. when we wandered off to put our feet up and get ready for a group dinner at 8:30. A good one, and more animated conversation (during which I got picked on a lot - I hate you guys!).

At dinner Larry Kehler mentioned that he HAD to see the Bass Pro Shop while he was in town. I'd heard about it too and since it was supposed to be open 24 hrs, three of our cars pulled up in their parking lot at 10:30. Now you ain't gonna believe this so I'll try to keep it short. Imagine a mid-sized, 2 story shopping mall entirely devoted to fishing and hunting. Oh, yeah, an elevator to the 3rd story restaurant. SEVERAL room-sized aquariums with bass and other fresh water denizens (including an 18 lb Texas record Black Bass named Ethyl caught in '86, and not stuffed, either.). Stuffed animal and fish displays everywhere and of every description. An auditorium with an aquarium for a back wall. INdamnCREDIBLE! It's a place like Oshkosh. Everybody ought to see it just once just to know such places exist. The place was closed to casual shopping, but a very personable 3rd shift supervisor gave us her personal tour. Don't miss it next year!

Over breakfast Sunday morning I got yanked into a revving Accord for a 7 hr trip back to Dallas. Our flocking was not yet over, however, I heard that Malechek and the local guys gave rides until early afternoon and were delighted about it. Jerry Homsley made a determined flight in from Little Rock in a new steed - the Ugly Quickling Quickie that he recently purchased from Norm Howell (now hard at work on a Long EZ).

I'm sorry I missed the rides but thankful to have Malechek practically in my back yard. Bob is one of those rare individuals who seem to take great pleasure in giving up stick time to his passengers. He enjoys his plane every bit as much as he wants you to. And Springfield is the place to do it...long, wide runways with only enough traffic to make the place interesting. And... friendly controllers. Thank you, Springfielders, for another productive flocking. I hope you'll invite us there again.

You can order a PDF or printed copy of Q-talk #21 by using the Q-talk Back Issue Order Page.