Longtime Dragonfly driver Nate Rambo did quite a nice article in the June (?) issue of Kitplanes magazine. He traced development of our two similar designs and their general differences and history. He cited Q-TALK and the QBA, which resulted in 20 inquiries right off the bat. These planes are still fascinating to potentially new builders. Kitplane editors failed to include a chart Nate worked up to compare stats among built airplanes. If you wore your eyeballs out looking for it, complain to Kitplanes so they'll include it next time. A couple QBAers cooperated with Nate with data on their airplanes. Thank you, fellas.

The Editor's wife, Mary, will be there this year so any of you out there who wonder from time to time can ask her why in person. You might get a surprise!

Q-TALK OUTPUT GOES WACKY. Every reporter likes a juicy scoop. So, I put off doing Q-TALK until after Sun 'N Fun this year to give you the freshest news. That became a pain in the rump as it pushed my schedule back so that this newsletter comes AFTER Springfield and in order to get out details for OSH I'll have to start #22 a week after this one leaves. SHeeeeeeeeesh! I won't get into this bind next year, it's killin' me! All you guys sending stuff typed in my format are appreciated this year more than you know.

I haven't sprung for a new computer yet and thank you to those of you who are providing me with continuing education in this arena.

From the Editor: In writing an independent newsletter of ANY sort, there is a particularly dangerous piece of editorial power that can be unfairly turned loose accidentally or on purpose.

Consider a scenario of 99 happy customers who don't think to write a letter of praise because their orders were filled just as they expected and so where's the need for a pat on the back? Now consider the one customer who feels mistreated and writes what he feels because he's had enough to take action to right the wrong. A company with only a one percent error rate can get a black eye big enough to sink its ship based on only ONE printed opinion. This poses a dilemma that I have solved in the past by printing the facts as the other side in a disagreement sees them. Each reader then gets to make his own judgment.

Make no mistake about my bias: My first knee-jerk reaction will always be in favor of you guys. In fact, I feel NO obligation to exercise great effort to get the supplier's side of the story. In general, I feel a for-profit supplier has greater resources than each of us do to protect his interests and do damage to us (price increases, slow shipment of goods, bankruptcy are some of their resources that come to mind).

Having said all that, however, fair is fair, and any supplier willing to educate us in the difficulties he experiences in serving us as customers is welcome here. After all, if a sportplane supplier hits the canvas after an inadvertent punchout, how much good does that do us? Anyway, in number 19, Brian Bulaw expressed his opinion and now Bill Forrest of Custom Composite Components gets a turn:

I just finished reading the letter you printed from Brian Bulaw. I guess I was not surprised by his remarks about Custom Composites.

It seems that the people you try hardest to please are the ones that appreciate it the least. We worked on Brian's plane for over 3 years. Do some arithmetic and figure out the profit we made. We never received a phone call from him that he didn't have to change something that had already been done (double labor costs). He would not let us do the fuel system the right way. He wanted it done his way or else. We advised him and we advised Scott Swing of this problem before Scott flew it. I have enclosed a copy of the flight test report written to Brian from Scott. I also have a video interview with Scott.

Brian's Q2 has a swirled aluminum panel that was nearly equipped for IFR flying. The radios were built on a tray that could be unlocked with a key allowing them to be taken along with the pilot. It had a beautiful paint job that would cost anyone a fortune. The airplane speaks for itself. I have enclosed some pictures.

We spent nearly $10,000 out of pocket, which I can document with worksheets, trying to satisfy Bulaw. We have learned some very expensive lessons. I don't think Bulaw would have been satisfied if we had done his work for nothing and delivered the plane to his doorstep.

If you wonder why we must charge what we do, it's because we have to somehow manage to make a living. We are trying desperately to change our status from a non-profit organization to a profitable business.

ED. NOTE: In the interest of determining % satisfaction as touched on earlier, any other CCC customers who have NOT YET expressed an opinion are welcome to do so. However, keep it brief and factual.

Marion Brown just called with the happy news that he's just flown but with a report that his Revmaster oil temps and pressures are sky-high, limiting him to 5 minute quick around the patch flights. He talked to Allen at Rev who said to look at the engine from the front, take the faceplate off the oil pump, pull out the two gears inside and look. On the right should be a hole a little over 1 inch diameter and on the left nothing. In "oneeeeeeeee other case" (heh, heh, heh - ED.) they found a hole drilled on the left side too. If there, it must be plugged or else the oil bypasses its normal cooling route. Anybody seeing this problem?

#2032 Late update: Well I got the "Q200" into a bigger hangar, "home built", of course. At 24x24 there should be room to finish. As of now I am ready to glue the wings permanently to the fuselage. Hope I understand all the "Q's" from the newsletters on what the wings are set at, canard 1 degree and the main wing at 0 degrees. But I can see this to be very critical for landing and takeoff control. I will be installing the speed brake and reflexers. Still working on toe brakes with a proportional valve to keep the brakes at equal pressure. This will leave a free left hand, and not the difficult transition from other airplanes.

Sure is nice to get great after thoughts from the Quickie news. I will add some extra plies from the fuselage to the canard; also add some to the front of the tail as I make normally hard landings in 152, 172. Reflexers, speed brakes, etc. So keep the info coming in.

Sorry I missed flocking at Springfield, even though it sounds like the weather did the flocking. 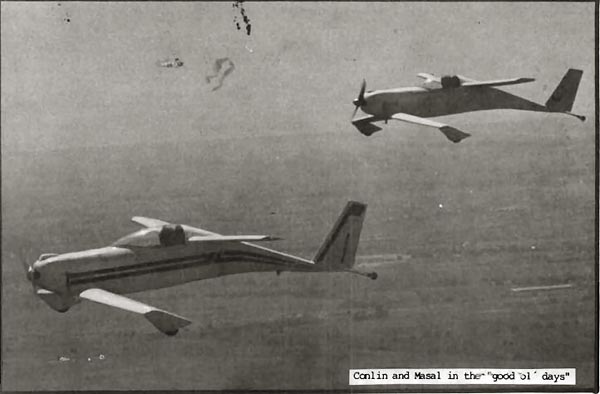 You can order a PDF or printed copy of Q-talk #21 by using the Q-talk Back Issue Order Page.