THE THING IN SPRINGfield 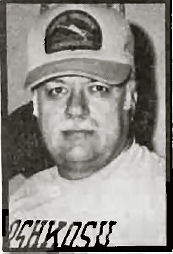 I'm glad I didn't miss it! As advertised it was a no-fail situation - 5 Q's already live there. 3 of these were Revmaster Tri-Q's, which were often buzzing around in the pattern (Carter, Condin and Langley). Whetsten had his totally refinished, repainted, reupholstered and retweaked Rev. Tri-Q in the hangar almost back together, and there was a Q-2 out on the ramp rotting in the elements (built in Springfield, someone bought it, taxied it some and then left it to die).

For our wonderfield hosts, it was all give and no take for the only outside plane they had to admire was Malechek's Q-200 (and he seemed to be in the air more riding/teaching then he was on the ground to be admired). The problem was the weather 50 miles south. At least 6 more planes had hoped to get in from Arkansas, Oklahoma and So. MO but a weather system had 'em locked out. Don Short and Sam Hoskins finally drove in. Malechek made it because he happened to be vacationing in Iowa the previous week.

Nevertheless, we had about 30 people gathered at our evening meals together and at the airport. Our hosts had a real "Eat Your Way Thru Springfield" tour planned for us and by Sunday noon the Q-2's were single place capable only.

Having all those planes in such close proximity with such a large gathering of dedicated human "bird of a feather" made for some richly rewarding conversations. I found some of the innovations Whetsten is trying on his Revmaster to be most interesting. His engine was complete and ready to install, but was on an engine stand for easy inspection. 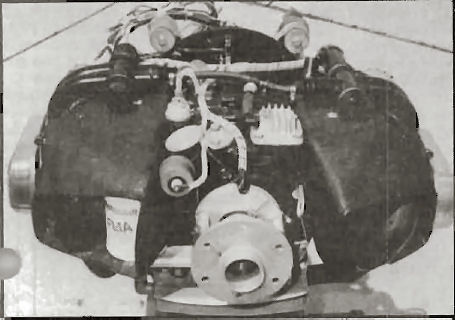 He has made an exhaust system out of a regular VW collector type system. His baffling is custom formed from fiberglass to completely enclose the heads (he figures it'll either work great or melt all over the engine after shutdown!), and he has a neat electronic ignition system installation. We expect to hear more about all this when testing is underway and maybe at Oshkosh.

I had hoped to upstage our British friends by putting together a Q-TALK cover shot of 4 Q's in formation, but I emphasized safety and the formation wasn't comfortable getting close enough for a really nice shot. We DID have four in a diamond though and we got it on tape and stills. Friday after dinner a crowd of guys filed into my room for a rap session. They quickly bought out my stash of QBA ball caps (a free beer with each one...introductory offer only) and then Bob Malechek hooked up a videotape of a recent experience.

Bob was filming a landing from the cockpit of his Q-200 while his buddy flew the thing. The tape showed everything progressing nicely when suddenly the thing ran out of air and slammed into the concrete with a bone-jarring jolt we could all almost feel ourselves. Brother, those carbon spars are GREAT! However...post crunch inspection showed a nice chordwise wrinkle in the top skin 8-10" from the canard/fuselage joint. Bob made a tape of his repair process. Bob had pointed out to me a slight discontinuity in his top skin at that same area months earlier. Since he's been over his plane inch by inch, he swore that it hadn't been there after he'd first painted it. Now we know what caused it. And we're now finding out it isn't uncommon.

Our Springfield guys and their wives left us planning for a return engagement next year. If anyone thought otherwise, THIS FLY-IN IS FOR REAL. They planned and executed a very nice affair and are ready to do it up even better next year. Set your calendar watches!

Scheduling for the EAA convention forums must've taken a different twist this year. Because we've had our evening forums on the second day of the convention for several years running, it has happened that HQ sends me a notice each spring that I'm on that schedule unless I notify them of a change. That didn't happen this spring and, silly me, I just trusted that the scheduling would be automatic. Solly Cholly. Several of you noticed we weren't on the pre-convention schedule recently included in your Sport Aviation.

I will call up there post haste to get us a slot and print it in the blank space I'm leaving here:

Meanwhile Ben Owen (EAA's Exec. Director of Information Services) has his office working with Swiss watch precision. I was notified in May that we are scheduled on the back porch of the Homebuilder's Corner:

Three cheers for Lyle Harrison, QBAer from La Crosse, WI who has for the second year arranged for us to have a get-together place on Sunday evening, July 30th from 7:30-12 p.m. If you found it last year, GOOD NEWS...it's in the same location: The Wisconsin Room of the Reeve Memorial Student Union on the campus of U. of W. Oshkosh. 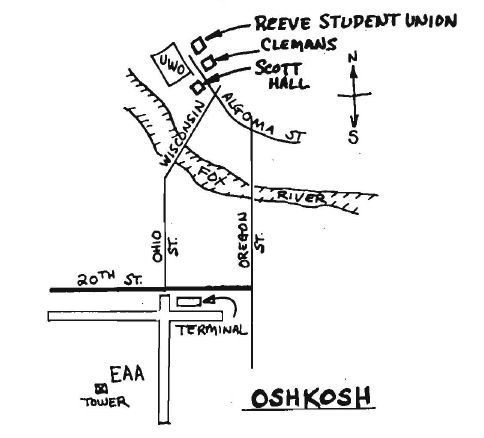 Remember, all you have to do is hop a city bus that says "UW Dorms" across from the main EAA entrance gate. Busses run about every half hour and will get you there and back cheaply. There, transportation is solved, SO, BE THERE! If you get a grumpy bus driver (unlikely, since they even have one who conducts rousing sing-a-longs on his trips), walk inside any ol' dorm and ask the desk for directions. The only people on campus are either EAAers or students - both very friendly.

We had a large, talkative crowd last year even before we rolled in the wine barrels. After that, WOW! For those of you expecting to fly early next day, there will be plenty of soft drinks and, of course, plenty of that nationally famous Wisconsin cheeeeeeese. But...this won't be a steak cookout so if you're ravenous there are several places around campus to get a bigger bite to eat.

This year we'll ask for a $3.00 each donation to help the event along.

While looking up the party info and directions that I wrote last year, I re-read my editorial for Jul-Aug '88. I found yet another exhortation for TIPS. As I look around this den full of QBA correspondence I have to thank you guys for responding very well over the past year. While we don't yet have 100% participation, a great many new names have appeared in Q-TALK as well as in my mailbox as progress updates not for publication. Thank you, guys. I enjoy working for you and with you.

Oh yeah, I just heard that newscaster Paul Harvey announced that the SR-71 Blackbird, fastest plane in the world, will be on display at Oshkosh!

You can order a PDF or printed copy of Q-talk #16 by using the Q-talk Back Issue Order Page.