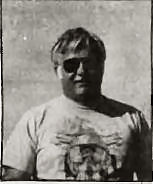 DID I HAPPEN TO MENTION IT WAS HOT?

One more year like this and I'll scratch the OSH/EAA event off my list and instead take a trip to the Sahara for a welcome break! I felt I was walking around in an endless toaster oven set on "dark". I left early (again!), and if you didn't arrive until Wednesday you probably missed most of the Q-bird pilots who also hit the skyways to enjoy more pleasant environs.

But if you arrived early, you saw a whole passel of aircraft! The airplane count in almost every category was up this year and you could tell it. Though all but a couple of the Q's were repeaters from previous years, we almost equaled our best count ever (missed it by only one). Here's who got fried under '88's relentless sun:

I got one of those "curbstone college" educations in geography this year. To accompany my wife who was going north to Rochester, MN, I bought one of those cheapo advance tickets to Minneapolis thinking that, once there, I could just walk across a river bridge and practically be in Oshkosh. El Wrongo! Marv Getten had to bail me out by linking me up with Ed Schweitzer whose van left the Twin Cities at 1 am, arriving at OSH about 7 am. Ed's got a Tri-Q (flying now) so the ride was far more enjoyable than it sounds.

I couldn't wait to hit the flight line. I notice it was pretty cross windy and the first QBAers I met reported that there was a broken Q-2 at the repair barn. He hit hard in the cross wind and broke the right canard just where you'd expect.

As we shot the bull, I notice the QAC prototype nearby with, lo and behold, Gene Sheehan and Joe Horvath (Pres, Revmaster) having a conversation. I moseyed on over to say "Hi," and nearly got my head chewed off by Horvath.

In an increasingly louder voice, he demanded to see what I had written about Revmaster in my last newsletter. The guy appeared to be shaking with anger as he claimed I had no right to print anything about Revmaster without checking with him first. I disagreed with his right to tell me what my rights were. He then accused me of bad business ethics. When I told him that I had printed, word for word, a letter that a QBA member (Kim McAndrew) received from Revmaster, on Revmaster letterhead and signed by his wife, Roberta, Joe stated emphatically (and loudly) that the letter was "bogus" and that "it never came from our office." Now either Joe Horvath or Kim is a bald-faced liar here. I have a copy of the letter and if it's bogus, Kim did a helluva job faking the Revmaster letterhead (including the typewriter which I recall as similar to other Revmaster correspondence I've seen) and then forging a great Roberta Horvath signature. What a clever rascal! If he did all that, what could his motive have possibly been? On the other hand, could Horvath POSSIBLY have anything to gain by denying the letter? I'll give you 3 guesses as to what I think...the first 2 don't count.

As I stood there, thoroughly tongue-lashed, surrounding QBAers started asking questions of Joe Horvath, and you can kiss my hiney if he didn't say the same kinds of things that were in the letter on page 2 of Q-TALK #10. I don't get it. He said they were going to start pursuing the marine engine business.

If you're reading your Sport Aviation closely you will note that Norm Howell copped an EAA Outstanding Workmanship award for his beautifully finished, record-setting Quickie, N170Q. QBAer Russ Cowles was awarded the Stan Dzik Memorial Award for Outstanding Design Contribution. Russ has developed and is marketing a nifty little remote compass based on some NASA work. I hope he'll give us a brief write-up on it soon. Congrats from all of us, guys!

If you think interest in our Q's is declining, think again. We had a full forum tent on Saturday night (300+ folks). Discussions were lively all around; I wish I had a tape. I did invite Gene Sheehan this year and while he seemed interested, he never showed. Gene was promoting his 0-200 engine mods and I suggested that at least that was a "neutral" subject he might want to talk about.

Lenny Padios asked for time to point out the concerns he had on page 5 of Q-TALK #8. He invited the principals of Custom Composites to respond and I think the crowd applauded Bill Forrest's forthrightness when he said essentially: yes, some of their 0-200 conversion components are priced high, yes, they want and need to make a profit to stay in business, and yes, they are still selling components necessary to convert to the 0-200.

The Homebuilder's Corner building on the flight line has turned out to be a great place to hold small gatherings. We had at least 2 meetings of about 20-25 guys and they were valuable. Unlike the forum, this smaller format really offers a chance to get to know fellow builders more personally and dig into information lodes more deeply...and even exchange names, addresses, phone numbers and invitations.

Just as I was cranking up one of these meets, writer Gordon Baxter showed up with a TV camera crew looking for a builder to interview. I was proud of myself, I kept my trap shut...at least until a half-dozen fingers point at me suggesting this was my chance at the big time. Everybody promised to start the meeting without me so I went out on the flight line and was interviewed next to Howell's Quickie. I rushed back to the QBA meeting and forgot about the taping until a couple weeks after Oshkosh when Ev Wieland (Quickie) called early one Saturday to say I was on TV...just a bit late for me to see. Shucks! The piece has been on independent stations and is called "Just Plane Fun" about the '88 EAA show. (If you happen to catch it and see my mug staring at you, no one is authorized to throw a Coke bottle through the screen except Joe Horvath).

The Wine and Chess Party held at the University of Wisconsin, Oshkosh Reeve Student Union was a resounding success. Thank you Lyle Harrison. About 60-70 guys 'n gals got relaxed, hunkered down and did some SERIOUS hangar flying. 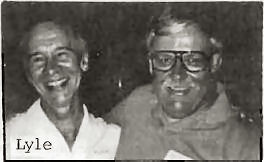 Anyone who might want to coax Lyle into considering the same thing next year should take a moment to send an "urging": Lyle Harrison, 2510 Hypoint Dr., La Crosse, WI 54601. (Let's all put him on our Christmas card list, eh?) A brief pictorial overview of our tipplers/tipsters is included in this issue.

As is usual for me these recent years, I don't get around much anymore. My needle gets stuck in the Q groove. A few other things do stand out though:

- Many improvements to the field. Just to the right of the main entry gate are 2 new buildings: one for EAA merchandise, and the other for FAA activities/programs. Finally, a place to see movies/slide programs at night. The Feds put on a good program on flight testing of homebuilts here.

- An extension to the N-S runway and lots of concrete in the area normally reserved for antiques. This is where the B1-B and the Concorde were stashed. Rutan's turboprop twin was here also.

- Ultralights were pushed about 100 yards further south (not far enough, some would say). You had to be a serious Ultralighter and carry a canteen to take that trip. I saw a lot of dried, bleached bones of travelers who didn't make it along the way.

- Our impressive B1-B was totally upstaged by the European Concorde. That is one beautiful ship. The crowd was just enamored of it. I believe if the crowd could have collectively hugged an aircraft, it would've been the Concorde. 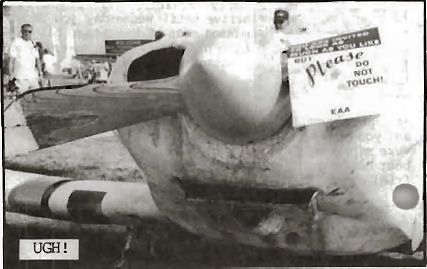 - And then there was a real "tramp steamer" of a KR-2 that was as dog-eared and dangerous looking a homebuilt as I have ever seen...oil and smudges all over, prop with unvarnished weathered spots and cracking fiberglass tip protection. Someone told me at one time that a Fed inspector came by, hung a 2-page list of gigs on the prop and grounded the plane. Two souls flew that bird in. Gives me the shudders.

- With the Voyager's success will come the imitators. Now we have a group seeking to cash in on the grassroots generosity that the Voyager program tapped. The Mach-Buster team wants us to finance a crack at yet ANOTHER last record - Mach 1 in a prop driven aircraft. They had a sleek partially complete aircraft for show.

- Lopresti had a snazzy turboprop Globe Swift on display and on the flight line several completed SX-300's were available for ogling.

- Two Dragonflys parked at the end of the Q line were sporting some exaggerated vortex generators. They looked twice as tall as ours. I'd always heard the "party line" that the D-fly canard did not have a problem with rain or bugs. Maybe it's just these 2 planes. It surprised me.

- And a BIG disappointing impression: Flight line visitors are increasingly inconsiderate of the heart and wallet it takes to craft a homebuilt. They'll lean all over your plane to watch the air shows, let their toddlers walk your canard, pick off your VG's out of curiosity, bend over to look while their unsecured cameras swing a damaging arc against your airplane, etc., etc. A Q-2 builder (not a QBA member) said he wrote a letter of complaint to Poberezny last year and the reply was; essentially, if you don't like it, don't come back with your plane. If that's true, Paul's giving some damn good advice.

A great gift for you and/or your favorite co-pilot is this very attractive, gilt, 3 dimensional Q-2 casting made up as a tie-tack or collar pin. Pins are approx. 3/4" long. $13.50 each and still available in time for the holiday. Great for explaining your project at those boring holiday parties full of non-fliers.

You can order a PDF or printed copy of Q-talk #11 by using the Q-talk Back Issue Order Page.