Now just who is it on the Sun 'N Fun staff, I wonder, that knows which weather gods to bribe for the good environmental conditions they've been getting lately? Oh yeah, there were a couple of sprinkly times, but nothing to make camping uncomfortable. There were lotsa beet red thighs, shoulders, calves and faces of those infernal Yankees who didn't realize how close to the equator they were and forgot about safe-sun protection. It was Florida nice, the strawberry fields were full of U-Pickers and the caterpillars at the forum tents were falling out of the trees like rain (I swear that airport's gonna be IFR in butterflies someday soon). The crowd count will be very close to the 750,000+ they got last year but, wonder of wonders, they still have not lost that loving feeling. Stay away from the vendor buildings the first two days and you'll find the crowd to be very well dispersed. But don't stay away from the vendors too long because there are a bunch of them and they offer good goodies and good deals. Good enough deals to pay for your trip.

Everybody was too busy running around all over the place, so I got only these abbreviated numbers below. But then, most of these guys are repeaters who we most importantly monitor for the total operational hours that they are building up.

If you really wanted to stretch the issue, you would hafta include Sherwood's N150CS, a Q-200, that hangs in the museum alongside a fireball-nosed Quickie-1 built by Art Kreutzer.

Usually Dwyer ducks in briefly from St. Petersburg, but I didn't see him this year. But we did have a ducker in Ernest Martin who was in and out fast enough that many didn't have a chance to ogle his beautiful piece of workmanship. Martin's plane is painted in Air Force Thunderbirds scheme with a very nice rolled and pleated red interior. He's been written up in Q-TALK with photos before. I've seen the color shots and although the photos look good it is a much, much nicer plane in person.

Phil Haxton's plane is interesting for the large cooling scoops leading into his Revmaster and a large Scott tailwheel on the butt end. Both of these items work well and Phil reports very little loss of airspeed compared to his earlier configuration. 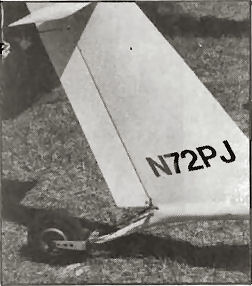 Ron Whetsten's golden yellow beauty and Dick Pratt's Sanford, Florida based Q200 are both FOR SALE now. Ron's itchin' to build something else and Dick went through a period of problems that got his medical lifted for a time and wore out his excitement over the Q. Pass the word around to any potential buyers who like the design and have more money than desire to build.

Particularly noteworthy was the arrival of Phil Yocum from Muscatine, IA in his TriQ200 five eighty-five Sierra Yankee. As he taxied this powder blue beauty in to park, the line guy on a scooter motioned him to stop. He complied. The pilot of a following RV-6 had his head locked up his hiney without the benefit of a Plexiglas stomach. Ran right up the tail of 585SY. Took out the rudder, T-tail and cracked the fuselage just forward of the vertical fin. Of course, this perpetrator was barely scratched and, true to our current social climate of responsibility avoidance, he was Mister Innocent, I'm told he seemed to be pushing blame off on the Sun 'N Fun organization, and guess what? He had no insurance because it was too expensive. 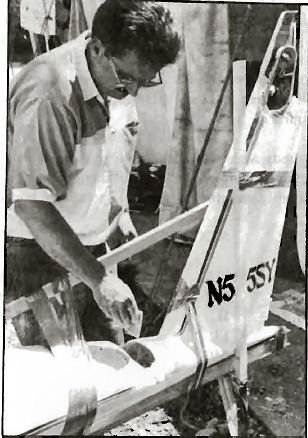 If you must have a fender bender, there ain't any places with more skilled technical support or more resources OR more willingness than Sun 'N Fun or Oshkosh! The Tri-Q never made it to the flightline but was forthwith dragged over to the composite workshop of all places. Now THAT was a workshop. It went on for 5 days. Jeff Russell was the lead dog on a team what worked like people possessed. Even had a "babe" on the hotwire who threatened me with the Lorena Bobbitt treatment, hotwire version, if I didn't cut out my sexist remarks. OWWWWWWch. They put in early days, late nights, whatever it took to not only run their own workshop but to assure that the repair was progressing with dispatch! Last I saw of it was Thurs. morning and they were not far from the finish line. So how about a free plug: Jeff and Greg Russell of Yadkinville, NC who run Aerocad, builders of molded Long EZ's. A very skilled and knowledgeable bunch.

QBA FORUMS - It took a guide dog named Fisher to catch me in mid-flight and orient me toward the forum tents, which had been moved this year from over by the workshops and FAA building to across the street from the museum building. He kept me from wandering around aimlessly in a confused fog and then arriving late. But I prolly DID arrive in a fog at least. 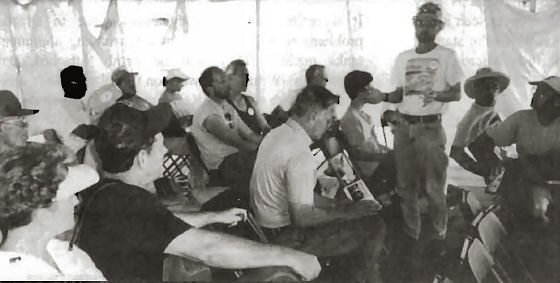 Our first forum leads off at 9 am Sunday (2 hours long). We had about 50 folks stroll in eventually and, as usual, the talk was lively. Our second forum (1 hour) was on Tuesday with a cozier 20-member group. Some topics: CG range and how it is determined in engineering flight test. We should delve into this more in this newsletter. John Stroud had an experience with vortex generators on his newly refinished Q-1. He started adding VG's a few at a time then flight-testing in rain/bugs. His Q now has 1/3 the normal number of VG's with good behavior in rain but more airspeed. He also set them at 10 degrees vs. 17 and spaced them 1" apart. Sparrow strainers: A couple of guys who have lost them in flight have noticed an abrupt but controllable "swerve". If they are not set right, you may feel an occasional pitch down "nibble" in the stick. If set correctly, they should neutralize the pitch up or pitch down rather than allow the pitching motion to deepen. Good Q's fly at cruise with little or no spring trim required on the stick. While talking about control responses, Malechek mentioned that he fell out of an attempted loop in his plane, got it to 230 in the recovery dive and found the controls to get very stiff at that speed. Whetsten's hard working TriQ wound up with a cracked Revmaster case. Ron says his was a Mexican case, which he believes is inferior construction. He replaced it with a Brazilian case from a VW speed shop and shipped it off to Steve Bennett of Great Plains Aircraft to do the necessary machine work. He's satisfied with Steve's work. Props: participants rated Sterba, DeMuth and Warnke props very highly. Autofuel: Stroud has run an Amoco premium in his Quickie for 13 years with no noticeable problem. A Long-EZ driver in attendance said that after 14 years of autogas use his tank shows a loss of the epoxy matrix and his glass weave is showing. He's had no other problems so he plans to open up the tank, clean and recoat with epoxy and expects to keep on going as always for another 14 years. Advice to new pilots: Never come in INTENDING to land. Take what nature gives you and GO AROUND if you are not satisfied with the way things are sorting out. Don't ease forward on the stick when about to land ... unless you want to see what a springboard is like at 80 mph and close to the ground. 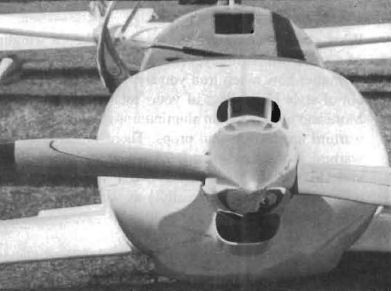 Phil Haxton sez this getup cools his Revmaster like gang busters but doesn't cost him much speed to do it.

Much more info was spread around at our forums. I can't take notes and moderate too, but I can assure you that at least two editorials were generated that you will see in these pages in coming months.

OTHER SHOW MEMORIES - I heard a lot of loudly growling engines every afternoon of the 5 days I was there, so I am assuming there were some terrific and spellbinding airshow acts. After umpteen years of airshows, I didn't stop to watch except for occasional glances to locate the source of the noise.

The angry noises of infuriated weed-eaters were nearly continuous over at the ultralights. This area is very popular and very huge in Florida. I've never seen it this big and busy. Lotsa flying going on. Even I'm starting to get a hankering for this neat little Micro Mong biplane kit I studied. More on this at a later time. 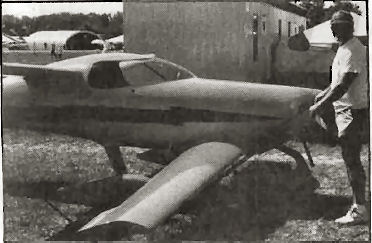 What else? A Grumman Avenger whacked a wingtip on touchdown Saturday, once again reminding us that no matter how much iron you fly, pilot skills never go out of style (regardless of your total hours at cruise). More and more Russian aluminum is showing up in the warbird areas - jet and props. There was a great big warbird in the form of a B-24, which was not pristine, and looking almost realistic WWII worn. And there was a DC-3 on floats (really!) as well as 4 more in increasingly well restored condition.

Scott Swing was there with his corral full of planes. They've redesigned the entry door, which is a VERY nice change. Scott also is still active in supplying pieces and parts for the Tri-Q mod.

P. S. For those of you who ask about my Dad, he's OK and alert but not getting out of bed or walking by himself yet. I scooted down there after Sun 'n Fun to see. Also, my hangar is up with metal all around and looks finished, but I don't have the concrete slab in yet, so it's not usable.

You can order a PDF or printed copy of Q-talk #50 by using the Q-talk Back Issue Order Page.