The following article is based on my personal experience flying behind my Revmaster for over 750 hours. My close friend Dr. Steve Kulczycky, with over 1600 hours behind his Revmaster powered Q2, and machinist extraordinaire Brad Baerg, who scratch built his Tri-Q2 and built his own version of a Revmaster, have also been of great help in forming my opinions of this great little engine. 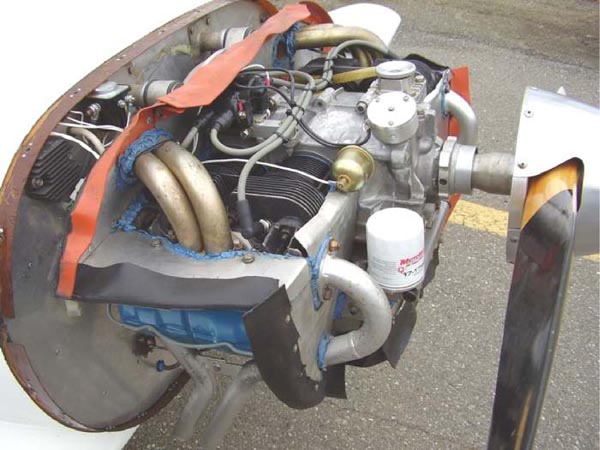 The Q2 was originally designed around the VW type 1 based Revmaster engine. This engine is perfectly suited for the Q2 airframe providing nice light controls and handling like no other aircraft. It is super economical only burning 4 GPH fuel at 145 MPH, so you won't need to carry an auxiliary fuel cell to be able to stay up for 3 hours. When it comes time to overhaul the Revmaster, you'll be happy to spend the same amount as a single replacement O-200 jug.

As we know, the Q2 has evolved over the last 20 plus years. So has the VW conversion. Just like the "Jim-Bob six pack" modifications help tame the handling of the Q, so are there mods to deal with the few issues the Revmaster has had in the past. These few modifications are not major, but they add to your confidence that the engine will always bring you home safely. I won't go into detail about Revmaster's bullet proof crank, #4 bearing and prop hub set up, since they have a nice article about the heart of their engine and the engineering they did on their website, www.revmasteraviation.com.

The Revflow carb I'm using is a terrific ice resistant unit, which I only had to set up once by filing the tapered needle to ensure uniform fuel flow at all throttle settings. The carb has been on and off the engine several times, but I've never again touched its settings. The blue Bendix dual magneto seems to be very robust and never skips a beat. In this article, I will deal with the cylinder heads and magnesium case, for which better alternatives are readily available for both. 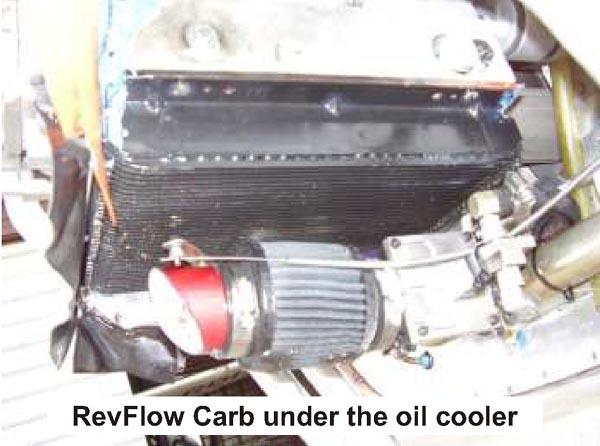 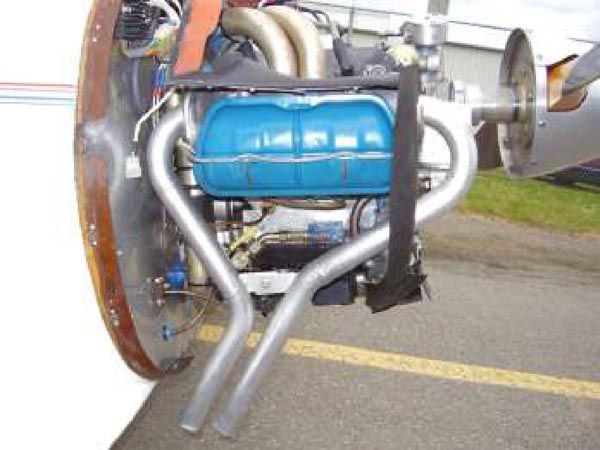 My little engine began its life happily powering my Q2, C-FBWV, under a stock cowl with per plans size cooling inlets and exits. Then one day at about 58 hours, it decided to stick an exhaust valve on a local flight with Dr. Steve. Originally I thought it was mechanical turbulence since we were up on a windy day and just coming around the leeward side of a mountain. The vibrations did not go away and being only 7 miles from home, we headed back to the airport to see what the problem was. The first thing Dr. Steve proceeded to do was remove the valve covers and start pushing on the valves with the back of a wood hammer handle. "You have a stuck exhaust valve on #3 cylinder" he said. Right he was.

Most original VW 65 HP heads seem to have this problem of sticking valves within the first 60 hours. So, off came the heads and to the machine shop they went for guide honing. While I was waiting for the head work, I decided to dismantle the engine and have all parts professionally balanced. This first inspection gave me some basic knowledge of the inner workings of the Revmaster. I was impressed with the minimal wear I found on main bearings and found the bottom end to be strong. I became confident this engine would last me a long time!

The engine felt smooth like a turbine after going back together and my confidence in it grew exponentially for the next 200 hours. I religiously set the valve clearances at every oil change and life was good until one day I ran out of adjustment on the adjustment screws. Darn, I just wanted to keep on flying.

David Hiatt, who had enjoyed a few rides in BWV, made me aware that there were better heads out there. CB Performance and Mofoco make good quality, thick flange heads that use long reach spark plugs and larger valve sizes. In fact, Revmaster has since switched to the larger valves and claim HP rating of 75 with their new heads. I elected to go with the CB044 heads and had them machined "a la" Great Plains style for the second spark plug hole. This made plug changes a cinch since I no longer had to remove the rocker arm assemblies to access the bottom plugs.

I kept my compression ratio at 8.5:1 and tried my new heads. Wow, not only did I notice a performance increase, but these heads ran 100 degrees F cooler in cruise. I thought, "Great I can decrease my cooling inlet size to half their original size, reduce drag and watch my face pull back as I rocket through the sky." Well, I didn't notice any speed increase, but my heads ran back at their familiar CHT temp of 375 in cruise. Life was good once again for another 250 hours, which included a trip to Merced, California and many other wonderful places.

I was approaching 500 hours TT when I started noticing small puddles of oil underneath my airplane wherever I parked. Not too much at first, but becoming more embarrassing as the engine hours passed. I took my former Flight Instructor up for some instrument flying lessons in the Q. After the de-brief I went back to put faithful BWV back in the hanger and that's when I noticed what I thought was entire oil content on the tarmac.

Panic set in. The cowl was torn off and the oil level checked. Whew, only 1/2 liter down with only one hour since it was last changed, "I can still fly can't I?" Dr. Steve walked over and said "You've cracked your block haven't you". He was right again, but I was in denial. I thought it must be the oil filter gasket since there was oil all over right front side of the engine case. Then Dr. Steve pointed out the hairline crack running down the flat surface just below the oil fill cap.

The magnesium case designed for 1500cc VW's had cracked at 510 hours. This starts internally at the #3 bearing saddle and finally works its way to the outside of the case. Dr. Steve had gone through 3 magnesium cases, all cracking in roughly the same time frame and was now using a recently developed aluminum case.

Well there I was.......decision time. In a hangar close by was a Honda conversion almost ready to bolt on. The Corvair was gaining popularity with the KR crowd. I even went as far as to buy a good 110 HP Corvair core and started educating myself by consuming Corvair research material.

It was late one night while still agonizing over what to do when my wonderful wife Melinda said, "Dear, you know how much we like to travel with BWV, which engine would you feel comfortable with flying over the Rockies to our camp sites or over the water when we frequent Vancouver Island". Without hesitation I said "the Revmaster" and my mind was made up.

I wasted no time ordering overhaul parts including a the new aluminum case from Great Plains (let GPAC know you are working with Revmaster parts). At the time of this writing, Revmaster did not offer the aluminum case. I was again impressed with the minimal wear on the bottom end. In fact, my crank was still in mint condition and ready for re-use. While inspecting the valves on the CB heads, I noticed that they may have been running a little hot. The exhaust valves had baked on black deposits that would have eventually lead to a valve sticking problem again.

The heads had been on for a long time, but I elected to open my cowl air inlets back to their original larger size. At the same time, I removed the cowl flap and built an "air extractor scoop" in its place. This is basically a stream lined permanent cowl flap as can be seen in the pictures and sucks the air over the heads to keep them at 275 degrees F in cruise.

The engine was back together in less than two months and I was lucky to get a test flight in on December 21, 2004, the day before our road trip down to San Francisco, CA and a quick visit with Jim Pattillo and Bob Farnam.

1) I already had the thicker cast heads with larger valves. The Mofoco heads can be bought directly from Great Plains with the bottom plug hole machined in them.

2) I had the new aluminum case machined for 94mm pistons and cylinders. This will bring the engine size up to 2167cc. This case is also available with all the machine work done from Great Plains.

3) I ordered a CB Performance Products Camshaft, P/N CB2232, with 262 degree duration and 0.396" lift. This slightly shortened the cam duration and, running the numbers indicates an additional 8 ft-lb of torque and 5 HP increase. Not bad for $80.00!

Words of Advice: The stock 65 HP heads should have the valve guides honed true. Then they will be OK for about 200-250 hours. You can greatly extend the service life of your cylinder heads by keeping them cool. This is a tough job in the Q2 since it is a tightly cowled machine, but with proper baffling, stock cooling intake and if possible, an extractor type cowl exit, there is no problem. Make sure that the baffling starts at the outside edge of the cylinder head so the valve areas are not shielded. As you can see in my pictures, my baffling is simple and works well. I believe any CHT in cruise above 350 degrees F is too high. Keep in mind, the VW cylinder head was designed originally for 1200cc engines and then later used up to 1600cc, 30-40 HP. When we double the HP for our aero engines, we have to get rid of a lot of excess heat. If you look at any VW Beetle engine, no matter how many miles, you will never see discoloration due to heat in the valve area. This means that the heads run quite a bit cooler in the car. The cylinder head is the hardest working item in your engine.

I believe that the Revmaster is a great engine for the Q2 if one respects its limitations. Both Dr. Steve and I fly our Q2 Revmaster's hard and often. Seldom has a flight gone by without at least 2-3 low approaches thrown in at 180+ MPH. We take our Q2's on long cross counties and through our West Coast Rocky Mountain ranges. 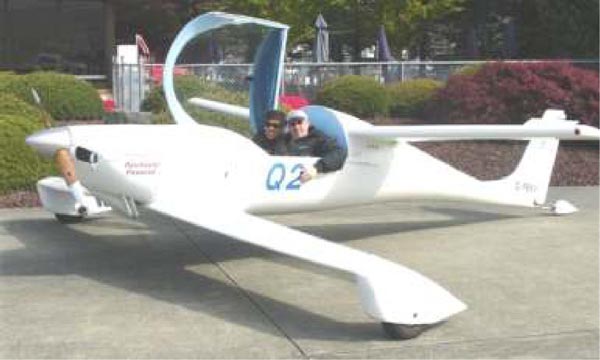 
You can order a printed copy of Q-talk #117 by using the Q-talk Back Issue Order Page.