The video above shows a time lapsed video of me constructing the jig for my main tank.  Hopefully this will provide a better understanding of what I'm attempting to accomplish, but I will go over the entire process in more detail below.

First, let me give you some background.  If you've been following along with my construction videos, you've seen that I needed to remove the main tank and header tank from my Q-200 due to leaks in both.  When it came time to replace them, I looked over the pertinent information in the plans, and also looked at the original template sheets.  What I found was that the jig that is suggested in the Q-200 plans would be cumbersome at least, and impossible to work with at worst.
So we all know that the plans are a little sparse on certain details, so with this article I want to begin to rectify that.  The construction of the main tank is covered in just two paragraphs on Chapter 4 page 1 of the Q2 plans.  The main tank is 44” wide and therefore I find it difficult to believe that Quickie Aircraft Corporation actually constructed their tanks by only using two male jigging templates set that distance apart.  However, I especially liked the admonition at the end of the first paragraph to “Try to keep the foam from becoming too wavy as you form it.”

My guess is that they were intentionally trying to get builders frustrated so that they could sell more of their pre-fabricated tanks!  Don’t believe me?  Check out the last sentence at the end of the second paragraph, “Of course, the easiest way to build the Q2 main fuel tank is to buy it prefabricated from Quickie Aircraft Corporation or one of its dealers.”

My goal is to come up with a detailed description of how to build a main tank, that is repeatable, and both fuel (and fool) proof.  In my opinion, the finished jig should hold the foam in its final curved shape without the need for hair dryers or heat guns.  In addition, the jig should have a sufficient number of formers to reduce the waviness, but remain small enough in size so that several can be cut from a single sheet of plywood.

After giving the problem some thought and reviewing back issues of Q-talk.  It became apparent that a female jig was the way to go.  Several builders have made this suggestion before, and I suspect that several more have been looking for a better method of constructing the main tank.

I’ve drawn up a full sized template for the jig that I built in the video above.  It is in PDF format and can be downloaded and printed on any large format printer.  The template is 12” x 24” and is based on the original fuel tank template that appeared on Appendix Sheet #2 of the Q2 plans.  To download the revised template click here.

I’ve sized the template so that you can cut six of them from less than half a sheet of ½” plywood.  You can do so by following the suggested layout pictured below. 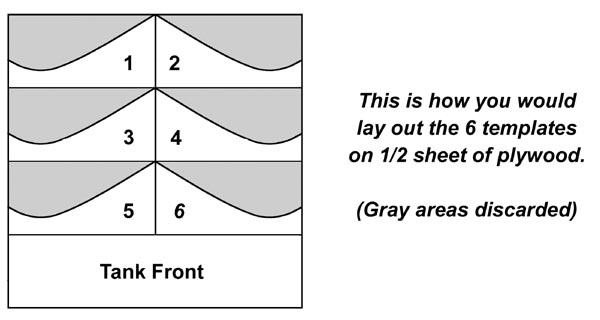 In the video, you’ll see that I cut a sheet of plywood in half with a circular saw, so that I could more easily handle it on the table saw.  The idea was to cut four pieces that were one by four feet.  If you don’t have a table saw, you can use the circular saw to cut everything.  The table saw however, ensures that each board is exactly the same width, and it makes very straight cuts.

After I cut the four pieces out, I took three of them and cut them in half, creating six pieces that were one by two feet.  This is the finished size of the template shown in the PDF file downloaded above.  I took each of those smaller pieces, and wrote the word FRONT along each of the factory cut edges, just so that I could keep them all straight during final shaping. 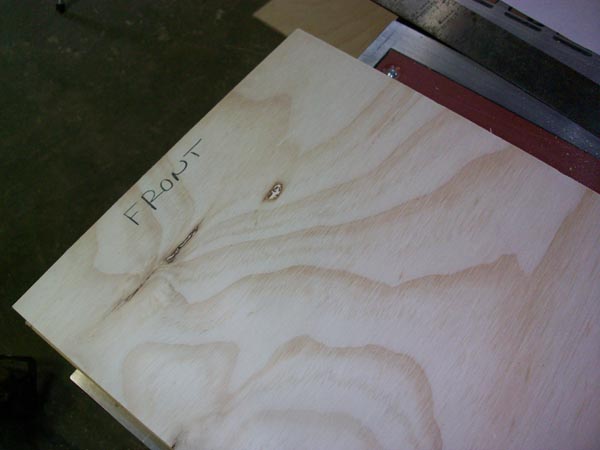 If you stack all of the pieces and line up all of the FRONTs, you’ll see that the back of the boards are uneven as pictured below.  This will happen due to the thickness of the circular saw blade.  But as long as you keep the FRONTs lined up throughout the construction of the jig, you shouldn’t have any problem. 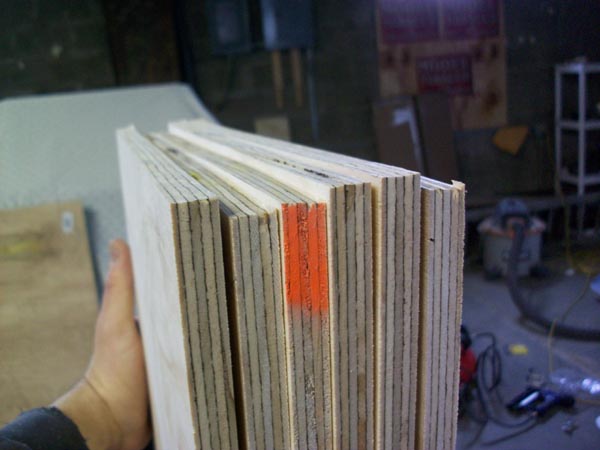 I took my printed template, cut it out with scissors, laid it on the top board, and traced it with a pencil. 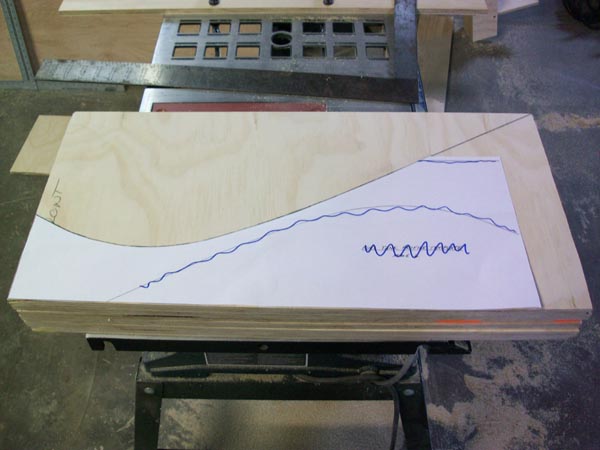 I cut the first former out using the band saw and marked it TEMPLATE. 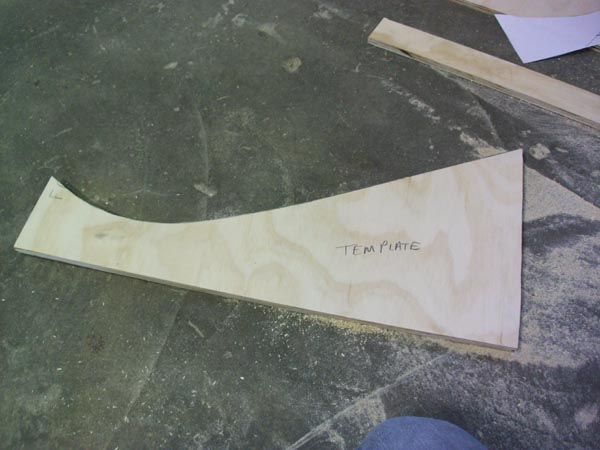 I used my TEMPLATE board to mark the other five boards.  Then cut each of them out as well.  Using the first board as a TEMPLATE for all of the others ensures the finished pieces are almost exactly the same.  If you don’t have a band saw, a hand held jig saw can be used to cut all of the pieces. 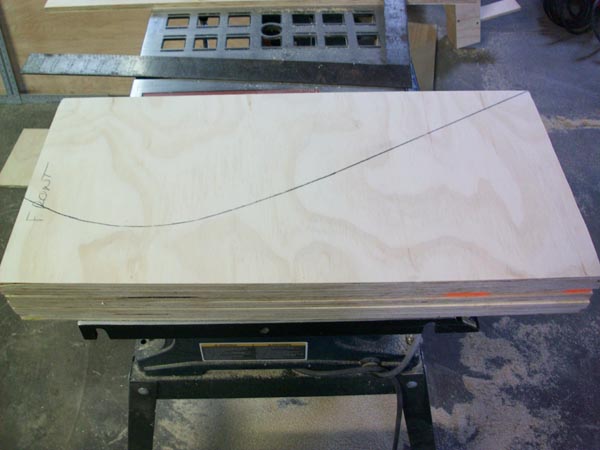 Using the above method is perfectly fine, but just to be a little more accurate I lined up all of the FRONTs on the cut pieces and screwed them together with two 3” sheetrock screws.  I then used a belt sander to smooth out any variations between the templates and ensured that they were all EXACTLY the same shape. 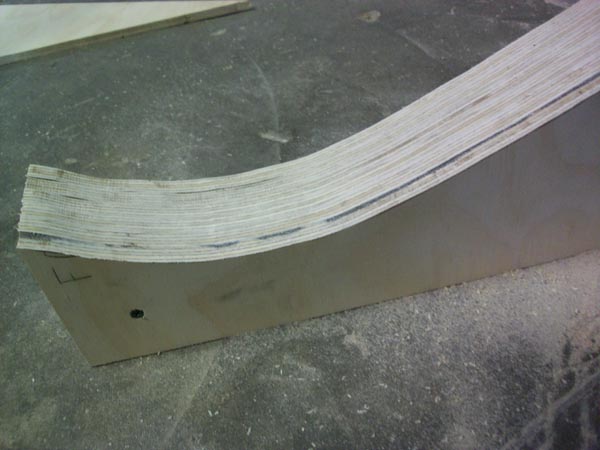 When that was completed, I cut two 4” strips out of the other half sheet of plywood.  I took a calculator and divided their 48” width by five.  This told me that the formers would be placed 9.6” apart.  I marked four lines on both strips that were 9.6” apart.  With the two end pieces, this would show the placement of all six jig formers. 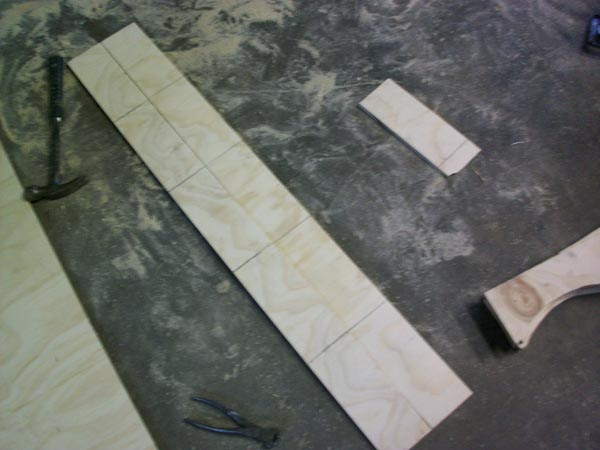 In the video, you can see that I nailed the two strips to the bottom of each former.  Ensure that you start at the FRONT of each former to ensure that they’re all lined up and squared to each other.  Once the FRONT strip is attached, you can nail the REAR strip into position in a similar manner.  I forgot to take a picture of this step during construction, but between the image of the finished jig below, and the video above, you should be able to figure out how the two plywood strips are attached. 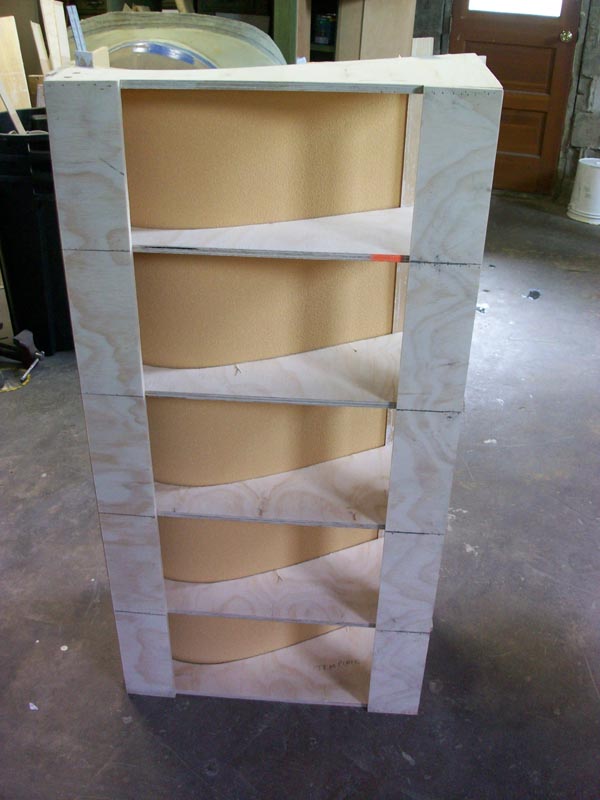 One of the “Sparks of Inspiration” I had was to create a recess to hold the front piece of foam into position while everything cured.  I’m using 1/4” LAST-A foam to construct my tank, so I created the recess by cutting a strip of 1/4” plywood that was about a half inch shorter than the front of the six jig formers.  I then attached that to the FRONT of the formers before attaching the remaining one foot by four foot piece of plywood.  You can see a side view in the picture below. 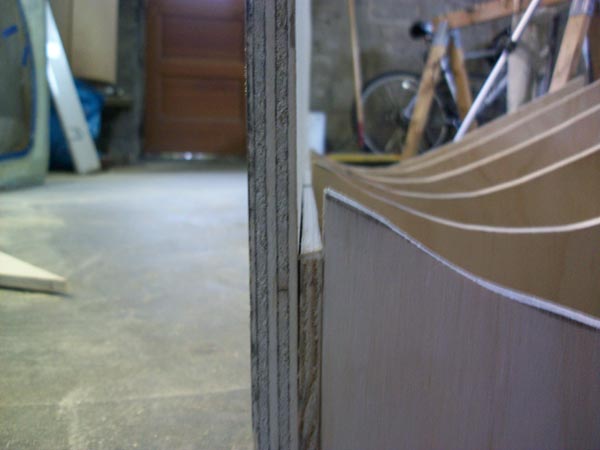 Here is a close-up view of the recess created to accept the front piece of foam. 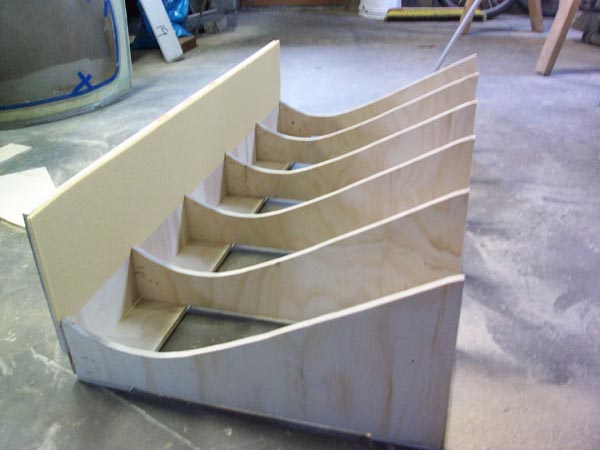 Now after all of that, I still had some WAVES formed when I attempted to place the larger piece of foam into the jig.  So to remedy the situation, I cut two one inch strips of 1/16” plywood (paneling) and nailed them in place along the front and back of the jig. 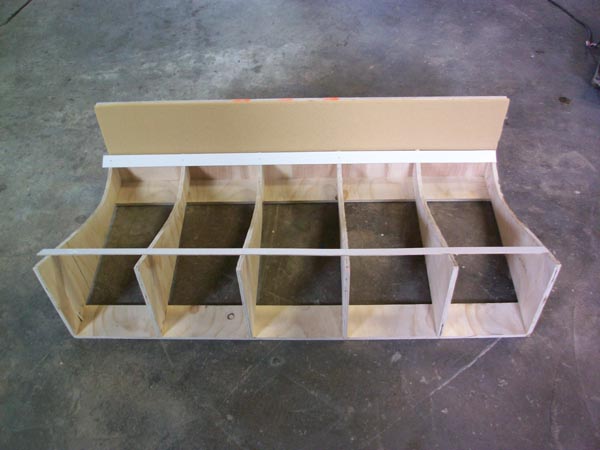 In this detail photo below you can see that I left a little gap and that the paneling is not touching the front piece of foam.  I thought this might make it easier to remove everything from the jig once the epoxy cured. 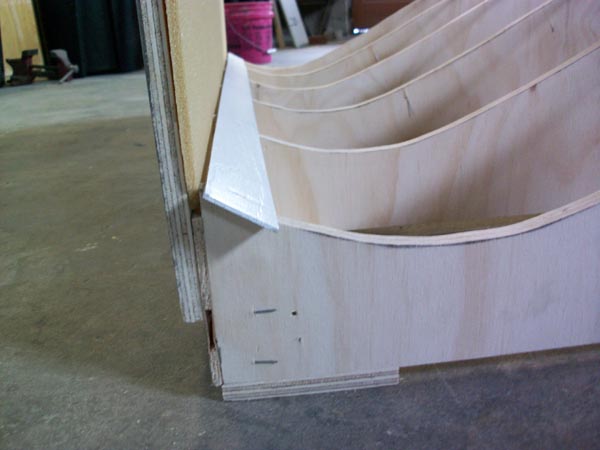 The only thing left was to press the larger piece of foam down into the jig, and hold it in place with another 3 or 4” strip of 1/4" plywood. 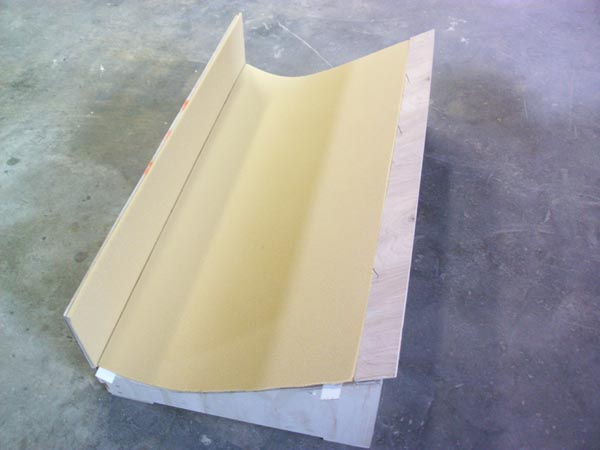 As you can see, the foam holds its shape without any need for heating it with hair dryers or heat guns that could potentially burn the foam. 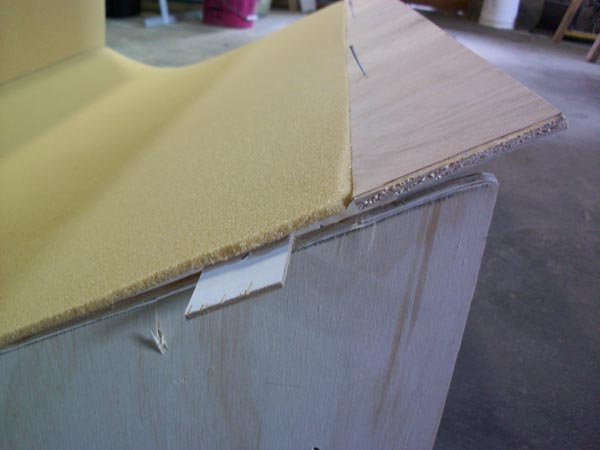 So that concludes PART 1 of the main tank construction.  STEP 2 is to choose an appropriate epoxy, and begin glassing.  I’ll cover that in the next issue of Q-talk so please stay tuned.

As always, I invite your feedback either below or in the forums.