Four years ago I decided to tear the wings off of my Q200 and make them 26" longer. At the same time I decided that a Tricycle gear would be something that might make me a "better pilot" (I know you are chuckling Jimmy). I also wanted to copy Earnest Martin by adding an MT electric pitch prop (had to save a long time for that one).

I replaced both wings with two new Waddelow flying structures. For those of you that don't know of the Waddelow conversion, let me elaborate. Marc Waddelow, a mechanical engineer, ran the calculations and came up with tapered spar caps and extra BID across the shear webs for both wing surfaces. The canard is built without the carbon fiber tubular spar. The carbon fiber spar is not necessary for a Tri-Q200 as the landing loads are not stressing the canard as they are in a tail dragger configuration. Marc then added an extra vertical shear web at 30% cord for the canard. It runs from BL 15 to BL 57. There is also a BID layer over the top of the canard running from BL 15 to the opposite BL 15.

There are several other things that Marc engineered in the process. I built my wings to 226" long while using Marc's calculations and lay ups for the 246" wings for added safety margin (I know it is probably a little heavier but I like the extra safety margin). I added 1.5% up incidence for the canard and .8% up incidence for the main wing. In doing so, I now have a Q I can see over the nose while cruising with the elevators and ailerons in trail with the trailing edge of both surfaces.

The Tri-Q200 has been back in the air for a year in May, 2005. I can at this time report that I have become a better pilot by no fault of my own. The tri gear is wonderful on the runway! I had one of the "Squirreliest" Q's flying by Larry Koutz's observation after taking off for a little 2 ship run with me (the tail wheel was a blur according to Larry). Now It lands "straight as an arrow" with minimal rudder on take off for P-factor. The only time I had a problem was when I let the airspeed bleed down too much on one landing. Then it bucked "end for end" and was very uncool.

Last summer my wife Joanne (Honey Lamb) and I flew out to San Francisco in the heat of August. The Tri-Q200 performed very well getting in and out of the high altitude runways with 2 on board (Gallup was at about 6500' msl and was about 85-90 degrees). The extra long wings helped lighten the wing loading plus the MT prop helped to move the rpm up into the higher horse power settings. We cruised at about 11,500 ft. and the view over the nose was very good. It was a wonderful trip that we hope to repeat some time soon. Jim Pattilo, Bob Farnam, Sam Kittle and the 'Livermore 5 or 6 or so" were such fun to play with! 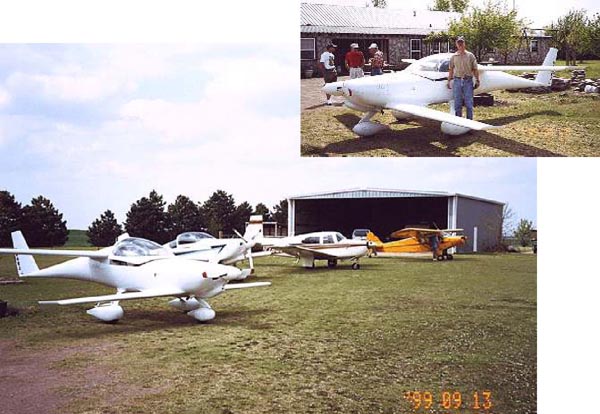 My hangar mate Charlie Calivas helped me with much of the rebuild and we discussed a lot of principles that we were dealing with. Charlie kept telling me I needed to test the Tri-Q200 on a grass strip to see if it would now be a viable option. Several weeks ago, I had an opportunity to land at my friend's grass strip. It was very easy as the grass tended to slow me down and I used very little of the 2500 ft. length (I used about 1/2 to 2/3 of the length, you do the math)! As I taxied up and "shut 'er down" I could see that Charlie was very surprised! His words were, "I didn't think you would actually try it! I told everyone you weren't coming! I would never have tried it in my tail dragger Q! It was too much of a "chore" to land and take off. On take off the MT prop and longer wings helped to get me airborne in about 1/2 the 2500 ft. on grass.

It took lots of work (as you Q-bees know) to convert the tail dragger to a Tri-Q200 and add the longer wings plus mount the MT prop. If you asked me, "would you do it again"? I would say a resounding "YES"!!! It is performing as hoped. ("Even a blind hog gets an acorn sometimes")! I am more confident each trip will be non-eventful when I fly now. At one time I made the statement "the tail dragger is better looking". Now I must say I like the Tri-Q better (you knew I would say that didn't you)!

Oh, I know everybody wants to know if I lost airspeed in the process. I can tell you that it didn't, but then I don't really have the CAFE testing material to make that judgement. I now cruise at 22 squared and see around 155 mph or better. If I want to cruise at say, 25 squared, I will see 165 to 170 mph. Those airspeeds needed 2600 rpm with my tail dragger without the MP prop. This time I installed the pitot at the end of the wing which may have changed the indicated airspeed

So there you have it. One satisfied Tri-Q200 pilot! See you around the patch!