You do not have to be on the grounds long while at EAA's annual aviation fiesta in Oshkosh, WI before you can see and feel very tangible examples of persistence, perseverance and passion. There is something deep down in these builder/ aviator's souls that drives them to go well beyond the commonplace. This small, select fraction of the population understands the persistence needed to successftilly complete a large project that may be multi-year or even multi-decade in duration. An amateur built aircraft is a collection of solutions to unique engineering problems that, through perseverance, make each plane a unique creation. Builders are driven by many passions that help mold their airplane/creation. Some need the speed. Some need the comfort. Some need the flight experience. Some need the satisfaction of creating a work of art and the recognition from peers. Some need it all! 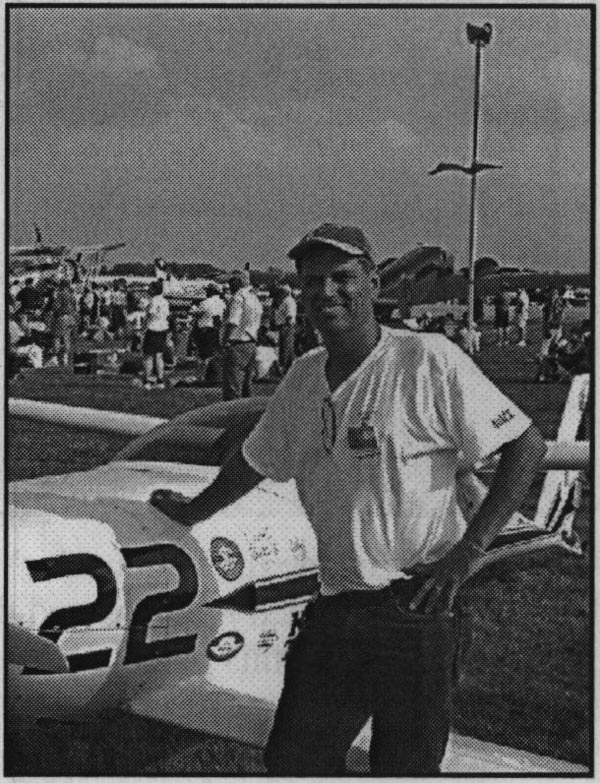 Flying into Oshkosh is a challenge and an accomplishment in itself. Sam Hoskins has flown his Q200 to Oshkosh sixteen times. For the last three years he has arrived flanked by other elite pilots who fly over 200 mph, as part of the AirVenture race. Sam's persistence and passion for speed paid off in spades this year when he took first place in the Sprint Class. With the experience of the last two races under his belt, Sam stayed at an altitude of between 800 and 1000 feet AGL the entire course so he wouldn't lose time climbing. He also said the most important thing he did during the flight was to push the throttle all the way in, tighten the friction lock and leave it alone. His tactics worked because he saw a significant speed difference between his Q200 and the EZ's that were sucking his exhaust fumes. Sam was already looking into next year's race. I hope I'm not giving away any top secrets here by revealing that I saw the look in Sam's eyes when he said he spoke with a vendor who sells manufactured air inlets for cowlings. Apparently Sam's salivary glands kicked in when the vendor suggested that he might see an increase of as much as a 4-5 mph in speed by using their product. We'll have to keep an eye on Sam's speed laboratory in Carbon-dale, IL to see what becomes of this tip.

Another example of persistence and passion resulted in a Bronze Lindy for Dave Dugas of Athol, Massachusetts and his superb Q2. Last year Dave received a Workmanship award. He apparently learned from that experience and cranked it up a notch or two for this year's judging. Congratulations, Dave, on a job well done. Your passion for excellence glistens like the Wisconsin sun off your canard. 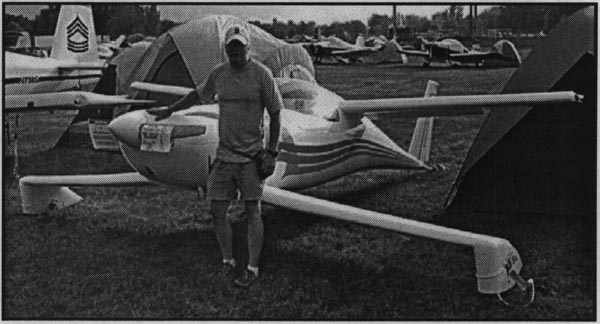 Jim Patillo and Brad Olson flew their "Jim/Bob 6-Pack" Q200's from the west coast hotbed of Q activity in Liver-more, California. Dave Chalmers also flew his Tri-Q200 from Washington state. These long cross countries from the west coast speaks volumes about the ability of these planes to get up and go and get there in style. Unfortunately Susie and I missed seeing Dave Chalmer's plane while at the show. I understand he installed the new Dyson EFIS and has been pleased with the multi-feature instrument.

Blake Uhl also made a long cross country from Georgia in his recently purchased Q2. Blake was still getting acquainted with his plane and had less than 30 hours in it when we spoke with him at Oshkosh. Now that he has tasted a Q though, I doubt that he will want to take a step backwards to his previous ride as an F15 instructor. Like they say, "Once you go Q, no tiling else will do!"

Bruce Crain and his son Jonathan, buzzed in from Enid. Oklahoma in the latest incarnation of his Q. Past lives have taken him from a Q2 to a Q200 to its present form as a Tri-Q200 with an extended Waddelow canard. Bruce is also in the process of getting re-acquainted with his plane and working out the changes from its prior personality. He plans to * prepare some comparative statistics and share them with the group so we can all get an idea of what impact the extended Waddelow design has made for him. 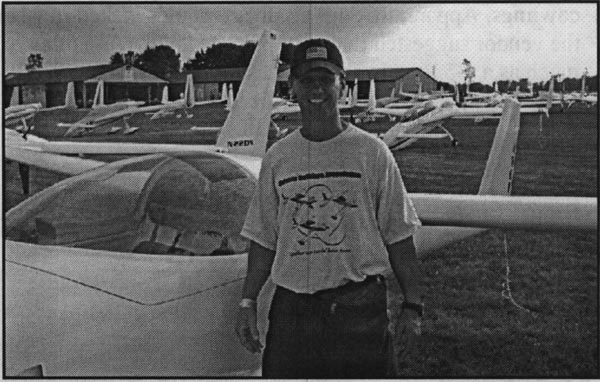 Paul Fisher flew in his 1200 hour plus beauty from the Davenport, Iowa area. His plane was parked in one of the more prominent areas on the main flight line where I'm sure many drooling spectators had their chance to see his magnificent bird.

About 40 "Q"thusiasts came to the QB A forum to hear reports from those who flew their planes into the AirVenture. Jim Masai did a masterful job of culling details from the pilots, as well as doling out admonishing glares to those who dared to admit that they had strayed away from the plans. We had a special guest at the forum, Scott Swing, formerly of Quickie Aircraft Corp. He is now part owner in Velocity Aircraft. We expressed our appreciation for his continued support of the Tri-Q community by offering Tri-gear, even though they are a distraction from his usual Velocity activities. It was good to see him there and to see his passion for the Q's is still alive and well.

On a general note, the homebuilt airplane to see this year at Oshkosh was Cory Bird's Symmetry. Cory works for Burt Rutan at Scaled Composites. It is obvious that they have got a top notch guy there. This yellow, single place vixen was located just inside the famous AirVenture arch. You could tell from the trampled grass around the plane that many spectators stopped to give this plane the eye. This guy really has composites down to an art form. Our own Terry Crouch pleaded with the lasses under the wing to grant him permission to duck under the ropes and get a closer look. The details on this plane were amazing. Cory placed a trailing edge "fairing" aft of each aileron along the side of the fuselage that couldn't have been more than 1/8", at the most. While I doubt it does much for his aerodynamics, all the builders recognized his craftsmanship. His cowling seams were remarkable in their uniformity and precision. It was no wonder the Symmetry was awarded the Plans-Built Grand Champion Gold Lindy. 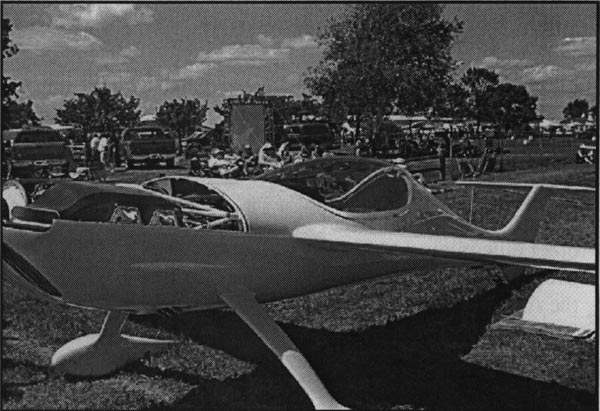 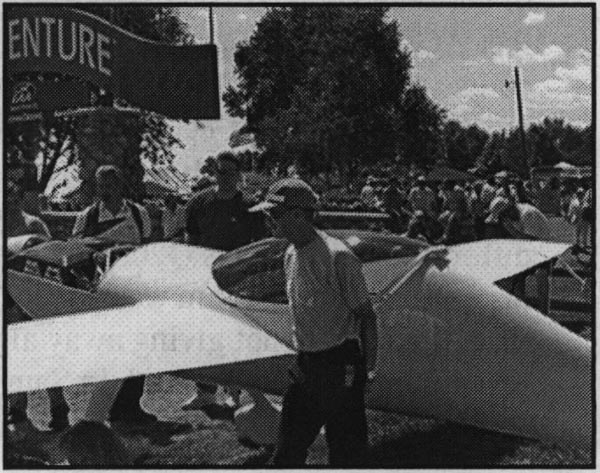 If an airport can be "a buzz", Oshkosh was that about the new "Sport Pilot" ruling and Burt Rutan's XPrize contestant SpaceShipOne. While the Sport Pilot ruling has the potential to open aviation to many new pilots, there are several practical details to work out. Top on the list for most people relates to medicals. Let's say, for example, you have two people with the same medical condition. One pilot was denied a 3rd class medical. The other does not go for an FAA medical examination. He simply uses his drivers license as his medical. The second pilot will fly. The first guy will have to receive a medical special issuance to fly as either a private or a sport pilot. There will be many private pilots who have lost their medicals who will be watching this very closely to see how the FAA will equitably resolve this kind of situation.

Burt Rutan - the E.F. Hutton of Aviation - certainly had full houses at all of his speaking engagements. During one of his forums, he presented the newest astronaut, Mike Melvill, to the crowd. They showed a video from within SpaceShipOne where you could actually hear the craft being struck by molecules of air as it began the reentry phase. (Be sure to read the two eyewitness accounts of the flight on page 9 of this issue, written by Jim Masai and Gene Knapp. Both were at Mojave for this historical event.) After one of his presentations, Burt met with the public for handshakes and autographs. Susie had a chance to speak with him. She told him she was with the Quickie Builders Association His face brightened, followed by a smile and he said, "Oh yeah! Is Gene Shee-han still involved with that group? I haven't seen or talked with him for a long time." It was good to know Burt still remembered our group. After some small talk, she asked him to write a quick note to the Quickie guys who receive the newsletter. He wrote the following: 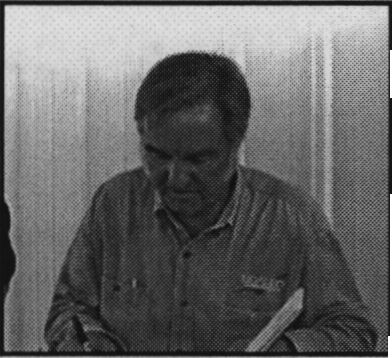 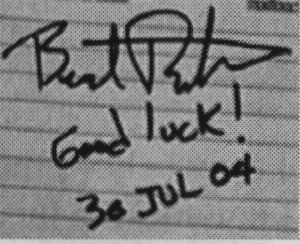 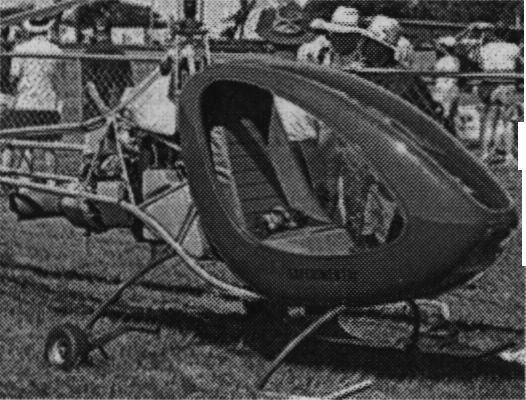 While skulking through the ultralight area, we walked by a fenced-in area full of small helicopters. On the end, we saw a red I jobbie with a unique f feature. It was powered by a turbine engine. Who'da thunk it?

The daily airshows included something new this year. Going by the name of the X-Team - Masters of Disaster, Bobby Younkin, Jim LeRoy and Jimmy Franklin, in his jet assisted Waco, flew their high-powered biplanes like they were strapped on the outside of a boulder tumbling down a cliff. The grand finale included all the smoke and flames possible coming from two jet-powered trucks, piloted by Ken and Scott Shockley, playing chicken on the runway at up to 300 mph, while the biplanes pierced through the mayhem. It was like trying to watch a five ring circus! It was very loud and very exciting.

On Sunday, several people attended a memorial service to show respect to deceased EAA members. Sandra Purtzer-Starnes honored her late husband, Bud Starnes, by adding his name to one of the 66 on the bronze plaques that day. Bud's good friend and building partner, Mike Zeller, attended the service as well. EAA president, Tom Po-berezny, gave a speech of hope and understanding before he read each name aloud. Planes flew overhead in the missing man formation. It was a very moving and fitting way to show how much we all miss our friend, Bud, and remember his passion for aviation.

Between the fantastic Q turnout, Sam's first place spot in the race, Dave Dugas' Lindy Award, visiting with good friends, and the emotional goodbye to our Bud, this was certainly an Oshkosh we will remember always.

WANTED: Canopy for Q-l. Also, I need an Onan engine in good condition. Please contact Nathan Peck, Marthas-ville, Missouri. Call collect: (636) 433-3633 or email This email address is being protected from spambots. You need JavaScript enabled to view it.

FOR SALE: Completed Q2 N393JT with LSI canaid less engine and some instruments. Includes hydraulic disc brakes, reflexor, belly board, sliding canopy and sharp paint job. Flown for 12 hrs TT. John Touchet, fL (863)294-8540 or cat52 This email address is being protected from spambots. You need JavaScript enabled to view it. (8)

This email address is being protected from spambots. You need JavaScript enabled to view it. (4)

You can order a printed copy of Q-talk #106 by using the Q-talk Back Issue Order Page.