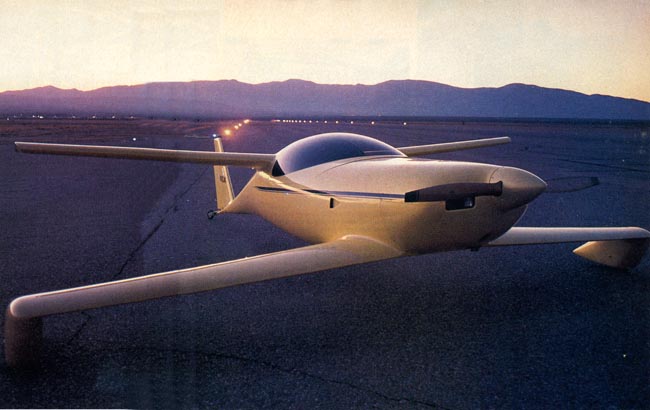 "We left out everything that wasn't absolutely necessary," says Tom Jewett, one of the Q2 designers and a former flight-test engineer on the B-1 bomber. "If it's not there, it won't break, and it won't need fixing."

Among the things the Q2 does have are some basic design features that caused quite a stir when they first appeared- on the original one-seat Quickie and on Burt Rutan's VariEze (the "Hot Canard" on our November '78 cover). For example:

Working with Jewett on the Q2 were Gene Sheehan, who had helped with the tooling for swing-wing supersonic F-111's, and Garry LeGare, whose Leg-Air Aviation Ltd. is the Quickie and Q2 outlet outside the U.S. Rutan was not involved in the Q2, though he was on the team that designed the original Quickie.

"We wanted a high-speed two-seater with cross-country capability that would be quick to build, economical to operate, and simple to maintain," says Jewett.

The original Quickie design was their starting place. The porpoise-like shape of the Q2's fuselage is directly descended from its single-seater sister. "That shape was determined by two things," explains Jewett. "First, the tail wheel had to be located where it gets the proper ground attitude for takeoff and landing. And by curving the bottom, we reduced tl1e surface area, which reduces drag-and we also reduced the weight." But despite the similarities, the Q2 is "a whole new idea," Jewett says.

The designers did their "wind tunnel" work by driving up and down the Mojave Airport runway with experimental airfoils stuck on top of a pickup truck. They attached tufts to the wings and photographed them on each run. "We made subtle changes in the airfoil shapes," says Jewett, "and came up with some that worked better than those on the Quickie."

To make the Q2 easy to build at home, the designers decided to prefabricate the fuselage. (It comes in four sections.) "This not only saves time and grief for the builder," says Jewett, "but it also gives him a better chance of coming out with a good-looking airplane. And it saves about 30 pounds." The reason: "We can use advanced techniques here in the factory that the home builder just can't duplicate."

LeGare built the prototype Q2 at his facility in Langley, British Columbia. Initially, it used a converted Volkswagen engine. "But after eight hours of flying time, we weren't satisfied with its reliability," Jewett explains, "so we decided to go with a more expensive engine, the Revmaster 2100 DQ."

With this 64-hp engine, the 537- pound Q2 zips along at a top speed of 180 mph. "We can go this fast on so little horsepower because we have lower drag than any other two-placer I know," Jewett says. Cruise speed is 170 mph, which burns 3.8 gallons of fuel per hour, for 44 mpg. Throttled back to 130 mph, the Q2 gets 60 mpg. In fact, the plane shown in these photos, which is the second Q2 prototype, has a top speed of185 mph and cruises at 175. Reason: careful building and attention to detail, Jewett explains.

Next the designers experimented with different propellers, one of which almost proved the undoing of the first Q2. During a flight test last January one blade of an experimental prop separated from the hub. Sheehan, who was piloting, was able to get the prop stopped, but in the second or two before, the severe vibration ripped the bubble canopy off the plane and damaged the pitch and yaw controls. The lIttle plane came down fast-at about 1,000 feet a minute-and landed hard 150 feet to the side of the runway. The fuselage remained intact, though the aft end was damaged; the canard wing snapped at the midsection on each side. And Sheehan walked away uninjured.

"We didn't set out to show the crashworthiness of the Q2, but it's difficult to think of a better demonstration," Jewett remarks. "We asked Gene to do it again so we could get it on camera, but he declined for some reason."

The control column is a tiny stick between the two seats. The basic plan calls for rudder pedals for only the left-hand seat, but dual controls will be optional.

The Q2 exhibits the flying characteristics typical of canards. The front wing stalls before the rear wing. The elevator control is on the canard and the ailerons are on the rear wing. Result: The plane does not completely stall because the rear wing cannot go beyond the critical angle of attack. And lateral control remains good, even at very low speeds. "Deliberate spins were attempted during flight tests," Jewett reports, "but the Q2 prototype will not spin."

The minimum license requirement for the Q2 is a student pilot's license. But because of the speed of the plane, the pilot must be more competent than the typical novice.

Building the Q2 should take about 500 hours, the company estimates. "First you assemble the four sections of the fuselage," says Jewett, "then you build the two wings. Finally, you put the three pieces together." The entire kit, ordered at one time, is $9,595. An information package is available for $10 from the Quickie Aircraft Corp., Hangar 68, Mojave Airport, Mojave, Calif. 93501.