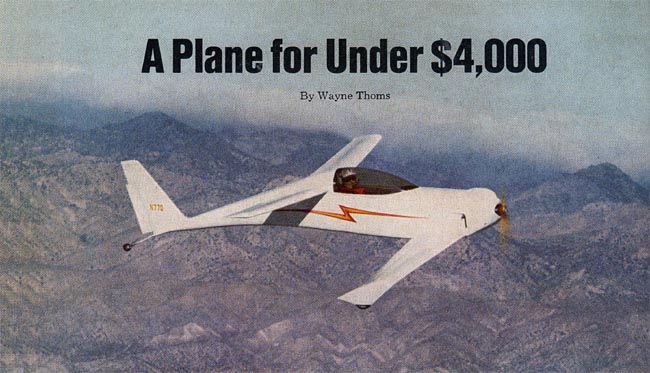 ODD-DESIGN homebuilt airplane called Quickie costs under $4,000 in kit form. We flew the only completed craft.

FLYING the Quickie is the most fun you can have in the daytime in public without getting arrested. So what's the Quickie?

Among other things, the Quickie is the lowest-cost plane you can buy, coming in at under $4,000. What you get for that price in these days when even bargainbasement cubs run to $16,000 is, of course, a kit.

But that leads to yet another nice thing about the Quickie. The kit represents the easiest-to-build plane in this country if not the world. And it's complete even to the engine, requiring only paint and a motorcycle battery before you, too, can be up there winging with the birds.

Moreover, the Quickie is an efficient craft aloft, able to cruise at 121 mph and, when you back off to an even 100 mph, she can go 85 mi. on a gallon of fuel.

We flew the only Quickie in existence at this writing-the prototype-but in shops and backyards around the country no less than 70 of these little jobs are being stuck together. Many are nearing completion. Construction time is estimated at 400 hrs., which is quite low for a homebuilt.

We arranged to take the Quickie up early one morning at the headquarters of the Quickie Aircraft Corp. (Bldg. 68, Mojave Airport, Mojave, Calif. 93501), which is located in the desert about 100 mi. north of Los Angeles. The air would be relatively calm at that time of day. There's not much in Mojave except gas stations, a couple of motels and some fastfood stops. Just to the west lie the Tehachapi Mountains. Our cover photo shows us banking over one of its slopes.

This paucity of population makes the town's airport a beehive of experimental aircraft activity. The flight line is filled with everything from ancient warbirds to new aircraft in semisecret development. There's even one outfit that flies surplus jet fighters on brief missions. They test new bombs on a desert range for ordnance makers before submission to the military.

When we learned that we'd be flying behind an 18-hp, 2-cyl. Onan industrial engine in an airplane that weighs no more than 480 lbs. with pilot and 8 gals. of fuel, we were apprehensive at first. However, a look at the plane's graceful if unusual shape helped dispel much of the uncertainty.

More significantly, the reputation of the Quickie's designers and builders - Burt Rutan, Tom Jewett and Gene Sheehan-is excellent. Rutan, an aeronautical engineer, became well-known in the homebuilt business with his first two composite aircraft, VariViggen and VariEze. Jewett, also an engineer, was a flight test engineer aboard the Rockwell B-1 bomber. Sheehan, a general aviation pilot, did much of the engine adaptation and built the first Quickie. After initial flight tests, Rutan returned to other aircraft development programs, leaving Jewett and Sheehan to market the kits.

The briefing we got at Mojave that morning was thorough. Jewett and Sheehan were anxious to insure the safety of pilot and plane. Once aloft in a single-seater there's little margin for error.

We learned that we were to be the seventh pilot to fly the tiny aircraft, which is a tail-dragger. Virtually all light planes today have a steerable nose wheel and run tail-up on the ground. Going back to a tail-dragger was like regressing from a 747 to a DC-3, though the Quickie at least has its rudder pedals linked to the tail wheel for control during taxiing.

The main wheels literally are in the wingtips. You can't tip the plane over on the ground. In fact, an emergency stopping maneuver is to jam hard rudder and groundloop. It's a bit hard on the tires but stops the plane.

We learned that the 47.4-cu.-in. four-cycle engine can operate continuously at 3,600 rpm, which means that the 42-in. propeller is direct-drive. There's a 15-amp alternator for the electrical system but starting is done by hand-propping.

We swung open the bubble canopy and stepped over a 34-in.high side-about motorcycle-seat height. Seating reminded us of a small formula race car, snug and almost supine. There was good back support and a comfortable headrest. Controls are in the armrests of the cockpit sill area- throttle on the left and fighter-style side stick on the right. It makes for relaxed flying, but full deflection on a side stick normally is so slight and response of the Quickie was so ... well, quick, that we found it easy to overcontrol.

The Quickie's design is unusual but has a purpose. The front, or canard, wing contains the elevators, while the rear wing has the ailerons mounted inboard .. There's a small rudder on the vertical fin. The wing design means that conventional stalls are impossible. We were told it was impossible to spin the Quickie during flight tests. Both factors mean considerable safety for low-time pilots. What happens in an attempt to stall is that when the canard stalls, the nose drops so that a couple of miles per hour of speed are gained. The rear wing never is permitted to stall.

In practice this is what's called a pitch-buck oscillation. At full throttle, full aft stick the Quickie actually climbs about 150 ft. per min. in its strange oscillation. In fact, we were advised that we could take off and climb in this condition. We didn't try it.

Normal starting means tying the tail wheel, cracking the choke., switches on, and spinning the prop. After a brief engine warm-up, the pilot fastens the canopy, someone releases the tail and the plane taxies to the runway. Because the ignition is single there is little to check before takeoff except for controls free, carb heat off, fuel on, trim in neutral, canopy latched.

Line up with the runway, push full throttle, hold slightly aft stick and the Quickie levitates at 53 mph, flying off more or less level and going up like a slow elevator. Acceleration feels similar to that of a small two-place trainer. Takeoff distance is 660 ft. at sea level, about normal for small aircraft and slightly less than a 100-hp Cessna 150.

Instructed to climb at 70 mph, we lowered the nose shortly after takeoff to accelerate. The idea was correct, but the Quickie is so much more responsive than the craft we usually fly that we pushed too much forward stick, then too much aft. The effect was an interesting porpoise at about 30 ft.-that's right, 30 ft .!-until we worked out the technique of gentle control movements.

Rate of climb is 425 fpm, but there's no gauge to indicate this. The instruments built into the canopy panel are airspeed, altimeter, compass and voltmeter. Tachometer, cylinder-head temp and oil temp and pressure are on the left. Our test plane had a ball to indicate coordinated flight but it did not agree with the seat of our pants. After a while we ignored it and later on the ground were advised that our pants were correct.

Once the Quickie levels off, the speed builds slowly behind 100 mph indicated. The advertised cruise of 121 mph true airspeed can be achieved, but we weren't off on a cross-country trip and didn't try.

The idea of being strapped into a powered flying machine that weighs little more than the pilot and has the ability to respond instantly to the pilot's wishes was mind-bending. Never has this pilot felt more in control of his destiny than with the Quickie.

Approach to landing is made between 70 and 75 mph, adjusting throttle as required to reduce speed and maintain glide angle. Contact is made at about 55, tail wheel first with stick full aft. In theory, at least, this is simple. After all, the main wheels are clearly in view on the wingtips, and with a long runway there is no reason to drop the airplane in. A kiss-soft landing should be within the grasp of even a novice pilot.

We goofed slightly, and were glad that the main gear I canard wing is stressed to 12 g's. Our drop was only a matter of inches but it felt like much more. The canard took up the shock, we steered carefully with rudder pedals and applied the brakes.

There were steep turns to be tried, power-on and power-off attempts to stall, then approaches to a landing with full-power low passes along the runway. The Quickie doesn't have enough power to be aerobatic but it's an absolute delight to fly in every other mode. This, we thought, is how aviation ought to be: no radio, no electronic navigation aids, no controllers- just the pure, sweet pleasure of flight, one person perfectly in tune with his craft. Without question, we'd call the Quickie the ultimate recreational vehicle.

The construction kit for the Quickie is about as complete as anything in this field could be. The engine even includes an hour of dyno test time.

To sum up, the Quickie has achieved its design objectives: to be an easy-to-fly, easy-to-build, safe flying machine that is low in cost and quite possibly the ultimate adult toy.