I was able to make it to Sun 'n Fun again this year but I was unable to make the Quickie Forum I had set up for Saturday because I depart on Friday morning.

I did run into Jim Masal, Paul Fisher, Tom Moore and saw Roy Shannon taxi his nice Q1 up to his parking spot just as I was about to board my ride home. By the looks of this photo sent to me by Jerry Marstall, we had a small contingent turn out for the forum. 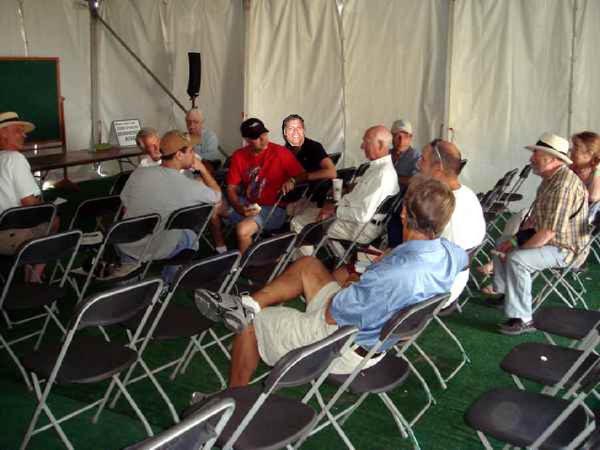 My observations were similar to how Jim Masal saw the show, but he says it soooo much better than I can:

If'n innybuddy thot dat our US economics wuz gonna put the KayBosh on SnF, they were mistaken. Yes, the event took a little hit, but there was still plenty to see and do. I heard that about 10% of the vendors pulled out late, but you would be hard pressed to name those missing. Oh yeah, the guy with the eyeglass cleaner and 2 T-shirt vendors were absent in the exhibit barns. The barns were still full though.

The barns were comfortable in traffic until it started getting elbow to elbow on Thursday. Lots of electronic gizmos for you deep-pocket Q-boys.

The outside exhibits filled the grass tarmac too. Cessna was there in force with a full compliment of bizjets and one dinky little purple nosed LSA. I saw a nice 2+3 single engine VLJ and it's fuselage with a turbine on it too. I think we'll all be upgrading once all the gov't. dump trucks start depositing loads of $$$ in our driveways.

The Grumman Tiger is back in production.

There were a dozen clustered hotrods with alternative engines at one end of the flight line. Several subi's, a wankel, etc. Homebuilts thickened up towards Thursday, but the RV's were well represented all week (lots of RV10's leaving the garages). Remember when the EZ's proliferated? I saw maybe only a half a dozen this year.

Roy Shannon brought his nice Q-1 and the local guy with the 2 tone D-fly was there for a day or two. 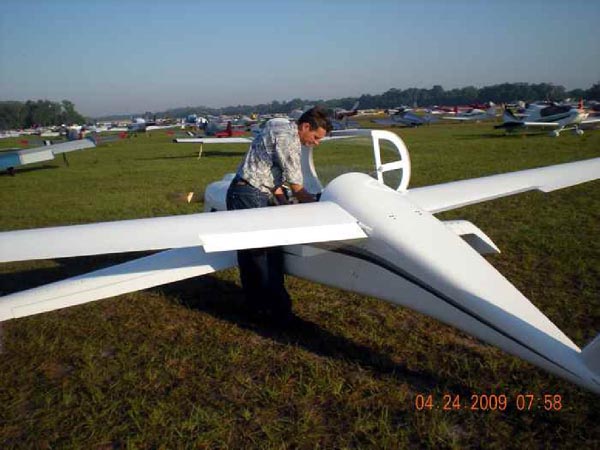 Over in Warburdz, economics hit big time. Very few P-51's, but I saw my favorite Yak 9 and a P-40 with no mouth artwork.

Lots of nicely restored 1930's to "60's antiques/classics filled up their pen.

Over in UL/LSA they seemed to be hit hardest. The individual entrepreneur seems to be hard pressed to compete with some of the pug nosed composites coming out of Bulgaria, Latvia, Transylvania or god knows where. I did enjoy watching progress with Titan's all metal T(P)-51. This year they added 4 blade props which REALLY sets that clone off.

I didn't get to CHOPPER TOWN. If I needed to duck outta da sun there were a couple of large bars set up in the central off-flightline area.

After tanking up I hadda hit the excellent corn roast not too far from my tent. Then I hadda hit the tent for a snooze prior to evening theater events which included movies "The High and the Mighty" and "633 Squadron" with some long shots of Mosquitos in action.

There was also a talk by a Vietnam Mig pilot who was reunited with the Airforce F-4 driver who shot his wing off. VERY interesting.

Jerry Marstall also sent in this photo of an RV10 who figured out how to bring a motorcycle with him in a belly pod. 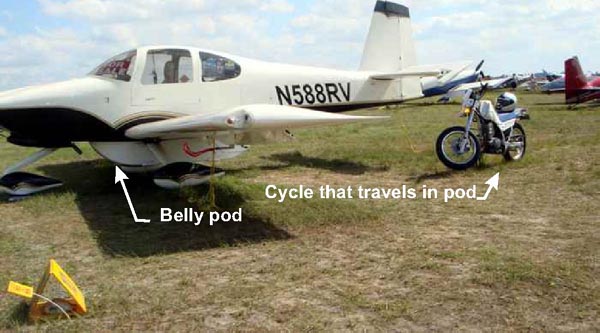 What I found interesting was that "green" has come to the aviation world. Sun 'n Fun had an area dedicated to green technology including this electric airplane. It has been featured in many aviation magazines. It has a range of 1.5 hours and as battery technology becomes even better, this may be a viable sport aircraft. 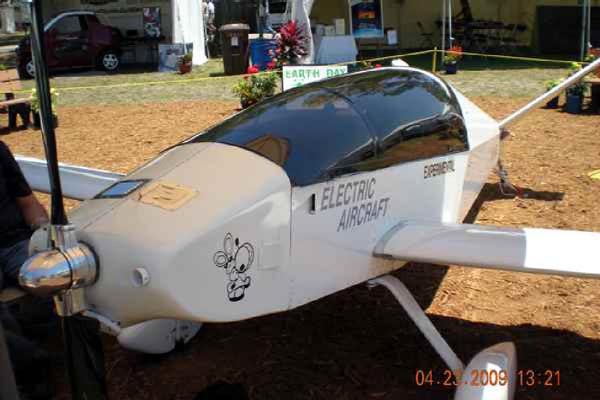 All in all the weather was warm and everyone saw plenty of sun.

You can order a printed copy of Q-talk #134 by using the Q-talk Back Issue Order Page.