Before I launch into the following, I am compelled to put forth the typical disclaimers. I am not recommending this procedure but putting it forth as a technique that I have used and feel that it may have merit. If it generates verbal exchange (with this group, that is a given) or gets people to think a little more about their first flight, my intent will have been fulfilled.

Throughout my 40-plus years of flying, I have always felt that the takeoff and departure leg is the most dangerous phase of flight. During this time the engine is called upon for maximum performance, the aircraft is slow, close to the ground and at a high angle of attack. In the event of a power loss during this phase, there are limited options to consider and minimal time to respond. As a result, numerous fatalities have occurred because of power losses during takeoff and departure.

My concerns were amplified when it came time to perform the initial test flight of my Tri-Q200 after a four year makeover. Conventional wisdom has it that if there is a power loss after takeoff, with insufficient remaining runway to land, the pilot's best option is to pick a spot within 30-degrees of the runway centerline and prepare for an off-field landing.

Since the Q aircraft responds to off-field landings by typically flipping over on its back, pinning the occupants inside, I went in search of a procedure that could terminate more gracefully. I conceived the Alternative Test Flight Traffic Pattern as a safer traffic pattern for initial test flights. I successfully flew the Alternative Test Flight Traffic Pattern procedure at a controlled field on my initial test flight and concluded that it is worth consideration as an alternative procedure for the initial takeoff and climb to altitude.

I foresee the Alternative Test Flight Traffic Pattern being useful, not only for initial test flights of experimental aircraft, but for the first flight after an annual/condition inspection, engine change/overhaul or any other major maintenance to any and all aircraft.

From my personal experience of flying this procedure, I believe the skill set required is certainly within the capabilities of any pilot who feels qualified to test fly an aircraft.

Most initial flight tests are conducted VFR above the airport traffic pattern, within gliding distance to a runway.

Convention has test pilots conducting initial test flights adhering to standard VFR, rectangular pattern procedures. These procedures essentially direct the ground track to be a climbing straight-ahead departure until approximately 500' AGL; a climbing crosswind and turn onto downwind. From this point the pilot typically climbs to a predetermined altitude and performs the test profile while orbiting the runway environment.

The problem with the Conventional Traffic Pattern ground track is that there are segments of the pattern that subject the pilot to prolonged exposure to the possibility of not being able to safely return to the runway should a loss of engine power or other critical emergencies occur.

General wisdom is that if an engine loses power on takeoff leg, beyond the point that the aircraft can be landed and stopped on the available runway, the pilot continues straight ahead, selecting a landing spot within 30 degrees either side of the extended runway centerline, and makes a controlled off-field emergency landing.

The straight-ahead landing is recommended because of the following: Typically on takeoff leg the aircraft is established in a shallow climb at Vy. The shallow climb places the aircraft at a relatively low altitude at the departure end of the runway.

As a result, the aircraft typically doesn't have enough altitude or energy to effect a 270 degree turn to return to runway centerline, followed by a low altitude reversing 90 degree turn to align with the runway. Attempting such a maneuver all too often terminates in an unrecoverable stall/spin.

p>A shallow climb after takeoff does provide the benefit of minimizing altitude to be lost during a descent back to the runway after a loss of power. There are obviously many factors that affect whether or not a successful descent to landing from an aborted takeoff can be executed: length of runway, takeoff distance, airspeed, altitude at which the loss of power occurred and rate of descent. All of these factors must be in concert before a safe landing could be made under Conventional Traffic Pattern procedures.

There is a "Point-of-No-Return" (PONR) where a descent and landing within the remaining runway can't be accomplished. At some point the aircraft will pass a point over the runway where it can not descend in time to land and stop on the remaining runway. Unfortunately, the PONR is not a single point but an area that extends throughout the upwind leg and turn onto crosswind. Everywhere along this track it is virtually impossible for the pilot to successfully return the aircraft to the runway.

I refer to this area as the "Oh-No Zone" (ONZ). An aircraft can be in the ONZ from a few seconds to a minute or more depending upon the speed of the aircraft. While within the ONZ, the pilot's only option following an engine power loss is an off-airport landing.

To compound the dangers inherent to the Conventional Traffic Pattern ONZ, in the ONZ the aircraft is flying directly away from the airport. This removes the runway from the pilot's line of sight, eliminating it as a reference.

Obviously, if the size of the ONZ could be reduced while employing a ground track that kept the runway in the pilot's view, the likelihood of an off-field landing would be reduced.

2. Does not require special consideration by ATC or other VFR pilots.

The Alternative Test Flight Traffic Pattern encompasses a procedure that enables a pilot to fly a safe recovery to the departure runway in the event of a loss of engine power during the initial phase of takeoff and departure. This is accomplished by reducing the size of the ONZ and utilizing a ground track that keeps the runway in pilot view.

The Alternative Test Flight Traffic Pattern incorporates low altitude maneuvering which has its inherent risks. However, these risks are minimal when compared to the safety factors this procedure provides.

Because of the differing characteristics of airfoils with high camber (high-lift) and those with low camber (high-performance) this procedure varies slightly during takeoff.

2) Instead of establishing a standard climb attitude, level off in ground effect and accelerate to the Point-of-No-Return (PONR). The PONR is defined as that point where the aircraft can't be landed and stopped on the remaining runway. 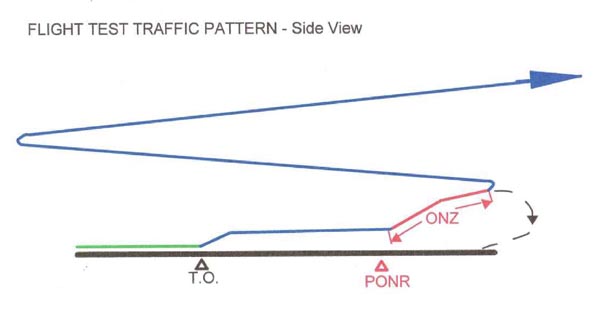 The PONR is a subjective decision made by the pilot during the takeoff in the same manner a Go-No-Go decision is made.

Level flight allows for faster acceleration and creation of energy (airspeed) that will be exchanged for altitude.

Flying in ground effect extends the PONR further down the runway because the low altitude minimizes the distance flown during a descent back to the runway. However, this advantage may be reduced by increased airspeed attained in level flight.

3) Upon reaching PONR, increase the aircraft's pitch and execute a 30-degree bank turn to a 45-degree heading change. A left-seated pilot would turn 45 degrees to the right in order to keep the runway in sight over the pilot's left shoulder. One of the significant benefits of this procedure is that the pilot can keep the runway insight throughout its execution.

At this point the aircraft has entered the ONZ (Oh-No Zone). (Should the takeoff distance exceed the PONR, the turn begins when Vy is attained. For example, an aircraft with a takeoff distance of 2,000' departing on a 2,500' runway, would takeoff beyond the PONR.)

Similar to the Conventional Pattern ONZ, if a loss of power occurs in the Alternative Test Flight Traffic Pattern ONZ, the pilot is left with an off-field landing situation within 30-degrees either side of the present heading. The differences lay in the time of exposure in the ONZ and the pilot's ability to see the runway departed.

4) During the 45-degree heading change, zoom to exchange excess airspeed generated while accelerating in ground effect for altitude until decelerating to Vy. (Vy is recommended vs. Vx to provide a larger buffer above stall speed. It also establishes a safe final turn speed).

Maintain heading and climb at Vy until abeam the departure end of the runway or laterally displaced from the runway far enough that a final turn could be flown to a downwind landing on the runway just departed, whichever occurs first.

5) Turn to parallel the original upwind leg. At this point the aircraft is exiting the ONZ.

6) Once re-established on the offset upwind leg, a pitch adjustment is made to attain the desired climb speed to insure proper cooling through out the rest of the climb to the target altitude.

Should a power loss occur after turning onto the offset upwind, a normal 180-degree circling final approach to a downwind landing can be executed. Because of the altitude gained during the 45 degree offset portion of the takeoff leg, sufficient altitude for a safe turn back to the runway occurs much closer to the runway than with the Conventional Pattern.

While it is prudent to conduct an initial flight on a calm wind day, if the pilot insists upon conducting the test flight in windy conditions, the pilot must be aware of the ramifications pertaining to the turn back to the runway. In the turn to final, if the wind is a quartering tailwind it will tend to cause an overshoot in the turn to final. If it is a quartering headwind it will help to prevent an overshoot. Regardless, the pilot must realize that the aircraft is landing with a tailwind and respond appropriately.

A pilot has the option of making the 45-degree turn into or away from a prevailing crosswind. I feel that turning in the direction that allows the pilot to maintain continual visual contact with the runway departed is more important than compensating for a crosswind.

7) As with the Conventional Pattern, the test flight track of the Alternative Test Flight Pattern is an orbit above the airport, within gliding distance to a runway. As the orbit gains altitude, the radius from the runway can be increased so as to easily see the runway but remain within gliding distance. Once at altitude, the direction of the orbit should be reversed to place the pilot on the inside of the orbit for continuous visual contact with the runway. 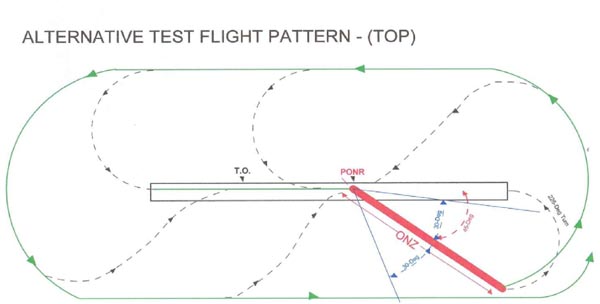 Due to the low-speed climb capabilities associated with a high camber airfoil, aircraft so equipped may find it more beneficial on takeoff to accelerate to Vy and upon reaching Vy commencing the 45-deg offset turn while continuing to climb. This would transition the aircraft through the ONZ and onto the offset upwind more quickly.

This procedure would provide more available runway for recovery. The rest of the procedure as described above would apply. (Some airport physical environments or ATC requirements may preclude the execution of the Alternative Test Flight Traffic Pattern procedure.)

1) Significantly reduces the size of and time in the ONZ

2) Runway is in the pilot's line of sight throughout the departure and climb.

7) No slow, low altitude steep bank turns as experienced on short final in the Conventional Pattern

You can order a printed copy of Q-talk #132 by using the Q-talk Back Issue Order Page.