Through the years the Onan engine has been the subject of an article or two, a discussion or two, and a disagreement or two. Through it all the engine has been defended by some and condemned by others. Even Burt Rutan told me that he thought the Quickie was under powered from the day he first flew it. And wouldn't you know it, most of the Quickies out there are still powered by that little mower engine that could, the Onan. Affectionately known by some, as the 0-2. (The little brother to the O-200)

More recently the discussion has delved into the later versions or the lineage of the engine with which I have become familiar with. I'd also like to add that I'm happy with the continued interest in this engine after all this time. Tom Jewett and Gene Sheehan really did a good job settling on this as the engine of choice to power their plane. Although, the Quickie could have used another 20 hp to start with. Knowing their criteria at the time, the Onan was indeed the best choice of what was available.

The Quickie came equipped with one of two versions of the engine. The standard 18hp B48M-GAO18, or the so called 22hp B48M-GAO18. Which of course is the same engine with some modifications. Unfortunately, I ordered the 22hp version. In short, QAC modified the engine by milling the heads, modifying the throttle shaft, and some re-jetting. In doing this, they ruined a perfectly good engine. I had nothing but problems with keeping this engine cooled which finally lead to me having to purchase a new short block, the result of an internal failure of the replacement camshaft bearing. Before moving on, I might mention that without a model and spec number, ordering parts can be a big problem. For that early engine I managed to learn that the model was the B48M-GAO18 with a spec no. of 3417A and a serial number of 338-1837.

In the mean time Onan had upgraded the engine to include a 20 hp version which preceded the Performer Series and was based on the B48 engine. That engine was mass produced for the lawn and garden industry of which one application was the John Deere 420 L&G tractor in 1983. That engine became the B48G-GAO20. I bought my John Deere 420 tractor in the spring of 1984 and it still "Runs Like a Deere".

When it came time to replace my original Quickie engine, I started looking at the Onan engine on my 420 tractor and noticed that the crank end of this engine was the same as our Quickie engine. So, when I ordered my new Quickie engine block, I used the numbers from the 420 Deere engine Model B48G-GAO20, spec 4175E, and serial # A843737904.

Due to a misunderstanding between the dealer and myself I ordered the Performance Series P224 engine. I think this was in 1993. Upon inspecting this engine I was happy to see it had many improvements. Internally, the rods were heavier and the heads were much different. Externally, the block was a much better quality casting and there were two gussets cast into each side of the block at the junction of the case and cylinders for strength. The carburetor set up was MUCH different beginning with a noticeably larger carburetor.

Upon closer inspection of the engine I was sent, I realized I did not have the 47.7 cid engine block I had anticipated, but the larger 60 cid block. I was tempted to use this larger engine, but decided against it as it was about 1.5" taller and wider. At the time, I was still fighting the cooling issue and didn't think more power producing more heat was going to help the situation. I also estimated it to weigh 5 to 10 lbs. more and I didn't want to figure out the W&B consequences. However, the gear cover at the rear of the engine was the same bolt pattern and it would have bolted right on where my original engine had stood. I elected to send this engine back and get the smaller short block. 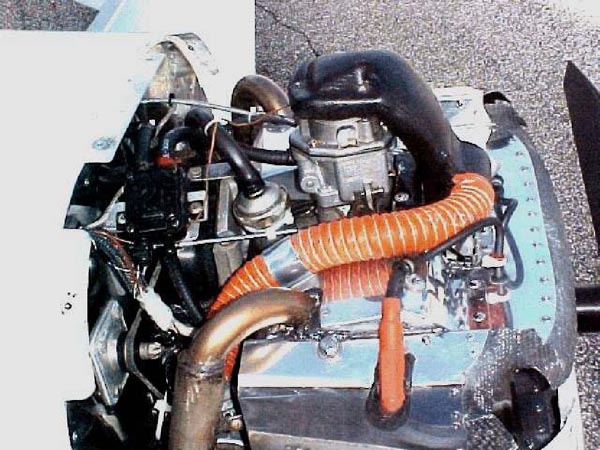 Once I had the correct block, the P220G block, I proceeded to build it up using all the external parts from the old engine, including the QAC plans baffling. However, this resulted in a very poor performing engine. On the 1st flight after the rebuild, it ran so poorly that it over heated and warped the valve stems. That's when I robbed the intake and carburetor from my 420 tractor. This improved the performance significantly. My new engine now roared like a cannon (for an Onan) and had the power to match. At the same time I removed the plans baffling and replaced it with a pressurized, tightly enclosed system, where the air flows only where it's needed. Then next time I went flying, I had improved rpm and climb rate. I was finally getting somewhere!

My engine described above has a points type ignition system. John Deere marketed an updated version of the engine called the P220G-I /11081C, sn B913774601 with the solid state ignition. This engine model and spec no. was used on the 420 tractor beginning in 1987. My research found the solid state ignition engines also have a larger lifter cam which produces a better breathing engine. This is the same cam used in the larger 24 hp, P224 engine.

In 1997, Onan farmed out the manufacturing of these engines to a Canadian company, Linamar Corp. out of Guelph, Ontario. The P220 engine is now marketed as the model LX790. You may find either the Onan name or the Linamar name on the engines, manuals or brochures. I have actually replaced the engine in my old John Deere 420 with a new LX790. The numbers for this engine is LX790 / 1128H sn H20X 299516.

From my experiences, an improvement in performance can be had by simply going to one of the newer versions of the 20hp engine. I would encourage purchasing the complete engine as none of the external parts of the QAC supplied engine will produce the expected result. Remember, the complete engine is cheaper than buying just the short block. Due to the newer engines having thinner valve stems, be prepared to revisit the cooling issue. I reviewed how the baffling was done on my 420 tractor and found cooling success in copying what I saw on this installation. I can send pictures of what I did if you don't happen to have a John Deere 420 tractor handy. Lastly, I had to drill out the carburetor jet in order to keep the CH temperatures from getting too high during climb out.

One last thing. If I knew then what I know now, I would have opted to try flying behind the 24 hp engine (LX990). I believe with some work, a guy could get it to fit under the original cowling. More power is a good thing!