Taxi for 5-10 hours before you fly! Taxi until you are sick of it, then taxi some more! I'm certain that all who've researched Quickies have seen or heard this advice, based upon actual and sometimes unfortunate experiences pilots have had with the Quickie's ground handling. Bob Farnam would tell me, "It's not a bad tail dragger. It is very controllable, if properly set up." Well, I have found Bob to be right. I have personally experienced the change in handling after making the 6 pack modifications Bob and Jim Ham implemented to make a Q more like "other taildraggers."

I purchased the Q200, N321TM, from Tom Moore, who built and put about 300 hours on the plane. Tom told me that after 17 years of work, he wasn't sure he would ever fly it as the plane was hard to handle on the ground. After aligning the wheels, Tom was able to get on with flying, but remained careful, often selecting airports with multiple runways in order to avoid crosswinds.

Tom delivered 1TM to Livermore and I began the learning process of taxi testing. Wow, it took a light touch; the brakes were sensitive; and finger controls - what are these? A quick decision was made to install toe brakes, using pedals designed by Bob Farnam. Jim Patillo provided a lot of advice and assistance, and I was back on the runway with toe brakes and the same, stock tail wheel. At 45-50 mph, things got exciting, but I figured after 5-10 hrs, I, too, would get the hang of it. Later, during a 45 mph pass, the plane hit a small bump and instantly turned 30 degrees. I barely saved it and knew it would be a matter of time before a ground loop or off runway trip would occur. Still, I kept trying until another "fun" ride occurred, this time with Jim Patillo in the passenger seat. Jim told me to park it and make a small fix or I would soon face some larger repairs.

With Jim's considerable help, 1TM was given a new tail wheel and control setup. I didn't have to travel more than 500 ft. down the runway to feel the change. Pedal inputs didn't cause large or abrupt changes in direction and bumps were not a factor. After one pass, I made a 60 mph run and felt in total control! I didn't feel I needed the 5-10 hours taxiing on the ground before I flew and I continue to be happy with the plane's handling today.

Bob and Jim talk about these mods as a system: toe brakes, Aviation Products full swivel tail wheel, a bellcrank to separate the rudder and tail wheel cables, LaRue brake mod, belly board and springs for the tail wheel. Many pilots are comfortable with the plane's original finger brakes but we would still recommend the rest of the mods. They work!

Aviation Products makes the tail wheel. Phone (805)646-6042 and ask for the 6 inch full swivel wheel for a 5/8ths round spring. The tail wheel can be purchased with a 10 or 20 degree body. I got both, selected the best setup, and sent the unused one back. The body should put the wheel in a vertical or slight trailing position -1 used 20 degrees. Builders are using this wheel on different tail springs. For example, Bob Farnam has a Dragonfly spring, Jim Patillo has a 5/8ths round steel spring and I have a stock, but built up, QAC tail spring.

The tail wheel body was drilled out to fit my spring. The wheel was floxed on the lighdy sanded spring, leveled, and taped into position Later, the tail wheel/spring were drilled and bolted.

A paper pattern was used to shape the bellcrank - 6061T6 aluminum with tapered ends to allow the shackles to rotate.

The forward and aft outside holes are the same width apart as the horn holes (6 inches). The aft, inner holes are the same width apart as the rudder horn holes. My bellcrank bearing is from Aircraft Spruce and is riveted to the bell-crank, with washers on each side. Jim and Bob got bearings locally. Jim's is press fit into the bellcrank, captured with washers, and held up on a sleeve over a bolt. My bearing fit over an AN4 bolt. Bob Farnam went with an AN5 bolt (and larger bearing) after looking at the potential loads that could be put on the bearing. 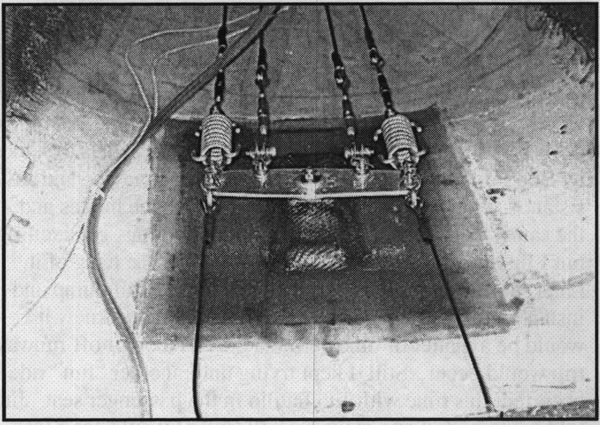 The phenolic block was 3/4 inch thick, about 6 inches long and about 2.5 inches wide. The block was completely sanded to remove the shiny surfaces, and all sides were sanded to 45 degrees to provide a transition for the glass. My AN4 bolt head was countersunk flush with the bottom of the block using a Dremel to cut the head shape. The bolt was checked that it did not rotate in the block.

Everything was made up and checked for freedom of movement before the block was installed. All other bolts were AN3. Jim and I have our tail wheel springs inside of the plane at the bellcrank and Bob has his outside at the wheel. The springs are from Aircraft Spruce. Turnbuckles are used to adjust the cable lengths and keep the cables tight enough tp prevent the springs from dragging on the deck.

Jim's and my bellcrank are located 38 inches aft of the part line. My phenolic block runs fore and aft and Jim's is side to side.

All hardware was removed from the block except for the center bolt. Tape was put on the bolt threads to keep them epoxy free. The block's location was set, and a marker was used to trace around the block. The inner glass fuselage skin was cut at the marked position using a Dremel. The skin is thin, so don't cut too deep. The cut was removed, exposing the foam between the inner and outer skins. The foam was removed, the block was test fit, and the inner skin around the cut was sanded.

The block was floxed into place, with a bead of flox left around the block about the width of a finger. After the flox cured, a Dremel with a drum sander was used to make a smooth radius in the bead of flox. The skin was sanded about 4 inches on either side of the block and about 3 inches in front and behind the block. Four layers of bid were laid over the block and the sanded area, with each piece having a small hole to go over the bolt

The tail was leveled, and the locations where the tail wheel cables enter the tail were sighted. Marks were made above these entry points and a small hole was drilled perpendicular to the direction of each new rudder cable. The hole was a quarter inch in diameter and only deep enough to cut the skin. Then, the Dremel, with a router attachment, was used to cut a slot where the cable would enter the tail. The slot was about a quarter inch in height, a couple of inches long, and about a quarter inch deep. 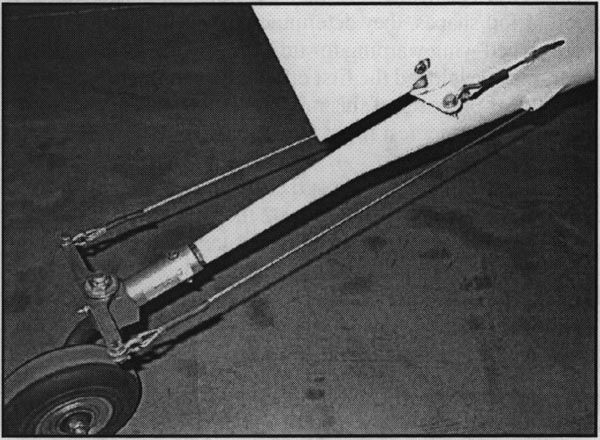 An 18 inch long, quarter inch diameter bit to was used to drill the tail, using the slot as a guide. Two people were involved. One person drilled and kept the bit aligned vertically. The other sighted over the bit and checked that it wasn't moving laterally. The holes were drilled until the bit went through the aft bulkhead.

Once the holes were drilled, a stiff wire was inserted into nyloseal tubing and into the hole. After some fishing around, the wire found the bulkhead hole, and a couple of feet of tubing were fed into the tail. The tube was cut and taped at the exterior slot so that it wouldn't be lost.

The cables from the rudder pedals need to be routed to the bellcrank. My cables (and Jim's) are on either side of the fuselage, so they take quite a turn going to the center where the bellcrank is. Jim installed pulleys at the first bulkhead in from the part line to guide the cables to the bellcrank. I just drilled holes in the bulkhead the same distance apart as the bellcrank connections and put in a couple of feet of tubing to run the cables in. I will have to keep an eye on the tubing and cable for wear.

This modification was completed over two weekends -what a difference it made!