The Quickie aircraft use the following airfoils:

A few Quickies and some Q2's use the LSI airfoil on the front wing. The only airfoil all have in common is the main wing airfoil, Eppler 1212. Let's note the difference between an airfoil and a wing. An airfoil is a two dimensional depiction of the profile which the wing will inherit. A wing is a solid object. An airfoil is a "drawing" of the profile that the wing will take on, like a side view of something. Wings are stuck on airplanes. Airfoils are profiles in computers.

The front wing of the Quickie family will be referred to as the front wing or canard. There are not a lot of canard airfoils listed in the public catalogs. Most of the canard, or front wing, airfoils were designed in the 1960's and 1970's, with exception of the Roncz 1145MS. In those days, software was mostly for 2-

dimensional designing. To design a good canard, 3-dimensional software is needed. I find it interesting that Quickie builders have chosen to use different airfoils for the canards, but have kept the main wing airfoil the same. I will not only discuss the Eppler airfoil, but I will supply an alternative, which I believe may be better.

First, the terminology: CL max is the maximum lift we can expect the airfoil to produce at a given angle of attack. Angle of attack, or AO A, usually goes from zero at cruise to about 15 or 16 degrees at or near stall. Software can show the lift of an airfoil beyond 22 degrees, but in the real world, the lift usually calls it quits by about 16 degrees. This is very important to remember if you fly a Quickie. Flying at higher AOA's is a good way to create a lot of lift, but it creates tons of drag, too.

Air has a viscosity or "thickness" about it that makes determining lift possible using a computer. Previous software did not take into consideration the viscosity of the air; in other words, air has a stickiness to it that prior programs did not model. Lockheed and Boeing produced some amazing airfoils because they held the finest in computer modeling software and processors. There they were, locked in their castles (okay, Skunk Works? and Phantom Works?) churning out new airfoils by the kazillions, while we peasants were left down here using Airfoil ii, one of the most unfriendly programs ever copied from Dr. Eppler. Airfoil ii also did not iterate on the boundary layer. What? There is an envelope of air around your wing during flight that is significantly important to all its flying characteristics. Although it is extremely important to be able to model this, almost no programs did. They put in little fudge routines to simulate the actions of the boundary layer, but none of these routines does a good job. Then came Xfoil by Mark Drela of MIT. Most of the computations in these articles is done using Xfoil because it does accommodate for the boundary layer. Yee haw. Now we peasants can design great airfoils, too.

Drag is a drag. It is designated by Cd. Any time you create lift, you also create drag. Drag is our enemy in most cases. The Eppler 1212 has a lot of drag. But we're gonna fix that! At every AOA we can predict about what the drag will be. You want as little drag as possible in the cruise configuration so you can go fast! Some folks want some drag to start kicking in on approach so that they don't require 9000 feet of runway in

order to land. Quickies aren't fortunate in this case because they don't have flaps. You have to essentially "plant" your Quickie onto the runway. Flaps allow Cessnas to land in so short. But Cessnas are ugly and Quickies aren't. But those flaps create a lot of lift and drag and that helps you use a short runway.

Then there is Reynolds number. Technically, the Reynolds number (Re or RN) is the ratio of the viscous forces to the inertial forces. For our purposes, Re is a way to establish a level playing field so that we can fairly and honestly evaluate one airfoil's forces against another's. This works because no units are used. Re depends on the viscosity of the air, the length of the airfoil or wing chord and the speed, usually in ft/sec. You will hear that an airfoil creates so much lift and drag at a given Reynolds number. Very loosely, this great equal rights for all airfoils number, Re, pulls out the BS claimed performances and brings all entries to the starting line fairly and squarely. High Re's (six million or greater) often means the aircraft is going very fast. Low Re's are often obtained to compare performances at slow speed or close to stall speed. I have approximated the Reynolds numbers for the Quickie airfoils as follows: Q1 Cruise Speed Re = 2.18 million or 2,180,000 Stall speed Re= 0.882 million or 882,000 Q2 Cruise Speed Re= 3.15 million or 3,150,000 Stall Speed Re=l. 152 million or 1,152,000 These are the Re's that will be used in describing the Quickie airfoils' performances.

The GU "canard" airfoil is strange. I'm not sure what project the folks at Glasgow U. were working on when they needed this. It is maligned because of its fallibility of losing lift when exposed to wet stuff falling from the air. The GU canard is not the only one with that problem. Dick Rutan discovered a severe pitch down in the Voyager when he flew through a "mare's tail", or sheet of rain. Had he not been able to escape the rain, he would have gone right down to terra firma, creating a big wedgie in Mother Earth from which he would never be able to pull out. The Voyager canard is similar in appearance to the GU. Every year, in some EAA forum, someone will mention the Q2 episode in which an owner placed a spanwise piece of decorative tape on the canard and experienced severe loss of lift. It has been discussed ad infinitum. Roncz said it best: "Don't fly through clouds of duct tape."

Let's see in figure 4 how the GU canard performs. The curve that goes up is a depiction of the lift is becoming greater. Yep. I know it's confusing. The higher this dude peaks up, the more lift (less pressure) it is creating. The lower line is the lift from the airfoil's lower surface. Here, the lower surface is not a real big team player when it comes to creating lift, but it sure will create a lot of drag if not properly designed. The dotted line is what most software says this baby will do in the low-pressure department, but the solid line is the one which best reflects reality. We'll always go with the solid line here. Look at the ledger: the little a means the airfoil is at zero degrees AOA; in other words, level and steady as she goes. At this AOA and this Re it is producing a whopping CI = 0.6261! That's a lot! That's just what you want a canard to do. There is a heavy engine and a fuselage riding on top of it. Most airfoils in general aviation produce a lift or CI at cruise of about 0.25 to 0.3. But the canard is little, so it has to do the work of a full grown wing; therefore, it has to create loads of lift. At this cruise speed this airfoil is making a drag = 0.00767, or "76.7 drag counts". The most used airfoil in industry is the NACA 23012 series. It makes about 75 drag counts at this speed, or Re. Therefore, it's not the most slippery airfoil around, but it is at least in good company. And does it ever lift! What is there about the GU airfoil that not even a mother could love? A lot Now we discuss an evil of airfoils: pitching moment. A negative pitching moment is that tendency of a regular airplane to go nose down after the tail falls off. A negative pitching moment, which most airfoils have, means that while flying, the airfoil is always wanting to nose dive to the ground. The number that follows designates just how much it wants to tuck under. Most general aviation airfoils, usually the NACA 4-digit airfoils, have a negative pitching moment (or Cm) of around -0.050. But remember, too, they are making only about 0.3 worth of lift. Here we are creating twice 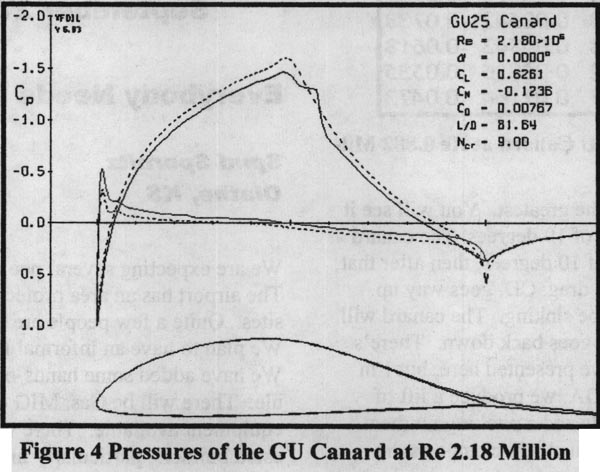 that; but look at our Cm of the GU: it is a-0.1236. That's awful. Why? Okay, here's where it gets thick. That much lift and that much Cm makes for a lot of induced drag. Remember that drag is our enemy. Well, induced drag is the Queen Mother-in-law of all the evil drags. Having more induced drag than you need is like inviting your mother-in-law to ride with you and your six kids on a cross country trip. You'll still get there, but it won't be pleasant. Adding unnecessary induced drag is like adding additional weight to your aircraft in climb. Remember how your dowdy Cessna 150 shot up like a rocket on your first solo flight? No dead weight from the instructor. Induced drag has the same effect. The high Cm means that we need more trim, too, and that adds, you guessed it, trim drag. See how one little thing can turn into a monster?

The whole idea of a canard is to create a Beech load of lift up to a certain AOA, and then stall before the main wing stalls. The GU canard does this well. Look at the "polar" below for theQl. Ignore the CDp column. 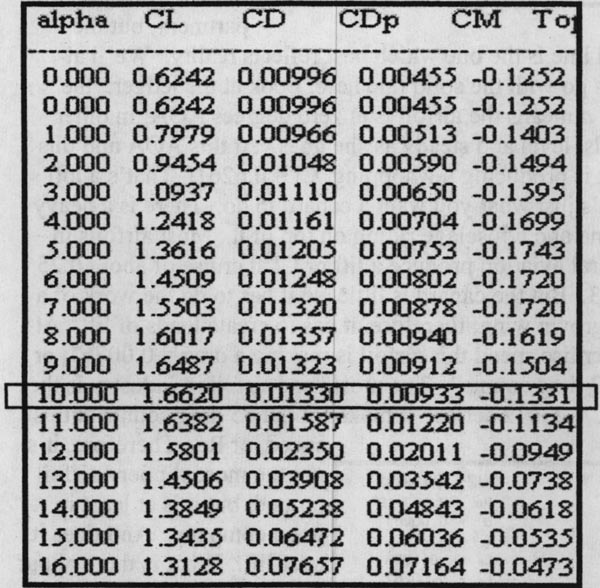 Figure 5 Lift/Drag Polar for GU Canard at Re 0.882 Million

Go to the point where the lift is the greatest. You will see it at a Clmax of 1.6620 at an AOA of 10 degrees. The canard lifts the airplane up to an angle of 10 degrees, then after that, the lift decreases by a lot and the drag, CD, goes way up. You won't be climbing. You'll be sinking. The canard will stall, then regain lift as the AOA goes back down. There's more to this canard story than I've presented here, but I'm saving it for later. So, at zero AOA, we produce a lift of 0.6242, a drag of 99.6 drag counts and a pitching moment (Cm) of-0.1252. See how these numbers change as the AOA increases. 99.6 drag counts is a lot of drag, but look at the drag at AOA = 16; there are 765.7 drag counts. Ouch! So, in this case as with a lot of airfoils, the drag increases with the lower Re; the drag also increases with increasing AOA. It's that simple. If you don't believe it, drive down the road with your hand out the window using it as an airfoil.

Notice that the resistance to the airstream is a lot more at the higher AOA. Uh, careful. Watch for mailboxes and passing cars.

A canard that stalls at 10 degrees AOA means that the main wing must stall at an even higher AOA, else you'll be a backslider. That's right. Deep stall. Your main objective is to never, ever let the main wing stall. You'll be going rear down until the eg has a chance to stop the bass-ackwards motion. Of course, this assumes you have 30 or 40 thousand feet of space above ground level before you hit level ground.

You can order a printed copy of Q-talk #94 by using the Q-talk Back Issue Order Page.