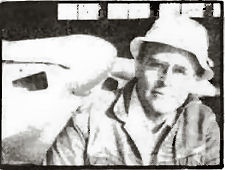 NOTE FROM THE FIRST TIME HOMEBUILDER

Towards the end of 1980, I found myself looking for a hobby. I wanted something, which would broaden my area of knowledge, but something I could do without separating myself from my family. Additionally, I wanted something, which would produce an end product, which would continue to be useful in the future. So I built a brick patio, a wooden deck and a waterfall/stream/fishpond. This gave me experience in woodworking, concrete and bricklaying and naturally led to my deciding to build an airplane.

Actually, I suppose my interest in homebuilt aircraft began when I read in a NATIONAL GEOGRPHIC article on aircraft development, which featured an interview with Burt Rutan and talked about the Vari-EZ. I subscribed to the CANARD PUSHER and discovered the world of sport aviation. I had always wondered what those 'EXPERIMENTAL' signs in all of the most interesting airplanes at the airport meant. At any rate, my wife, who refused to consider tandem seating, is a big reason why I now have a garage full of Q2.

Nothing in my background or career as a computer systems analyst prepared me for anything like this project. The fact that, after having looked at both sets of plans, it seemed that the Q2 is a simpler airplane to build than the EZ is a lucky thing for me. As I haven't had an opportunity to talk to Quickie builders or see their plans, I can't compare their level of required effort.

I'm currently about five years into and ninety percent through the construction of kit number Q2151. I was not a pilot until four years of building passed and I began to wonder what I'd do with the Q2 if I ever actually finished it. Not only am I a 'first time homebuilder', I was totally 'green' when the project began. I've often wondered what type of person the 'first time homebuilder' so frequently referred to by the various kit/plan producers is. What skills does he or she have? What kind of tools? What kind of workshop? I had a garage full of junk, a Sears mechanic's tool kit (bought to use when working on my 1957 T-Bird), a 3/8" drill (complete with all the wrong bits), an orbital sander, a Skil saw and other miscellaneous tools and skills required to build a deck in my backyard. No drill press, no bandsaw, no bench mounted sander or vise (no bench), no experience and no knowledge. This last may have helped since I've, for the most part, followed the instructions very closely as I at least realized my lack of knowledge and training did not make me qualified to make any changes to the plans which I had purchased.

I did get Rutan's "learner's kit" and videotape and carefully went through the course. This is something that every builder who is new to composite construction should do as it allows you to practice all the major functions you will do during actual construction. You will also have the chance to see if you enjoy working with the materials and techniques while, at the same time, finding out if you are one of those who do have an allergic reaction to the epoxy you will be using on an actual aircraft. When I finished the course, my bookend had bubbles, but I knew why and when they appeared and what to do to stop them from occurring on my airplane. I couldn't break my 'confidence' piece, so I decided I was ready to build. I made the trek to Hobbs, NM to talk with Theo Martin who was the closest QAC dealer to me, ordered a Q2, and took delivery of the first kit of Q2151 in September of 1981.

Meanwhile, on to the garage, er, workshop. Several loads of junk and old furniture were hauled away and I found the 1957 Thunderbird (which I kept) under it all. Black with white soft and porthole hard-top.) If you've been in Houston in August, you'll know why I insulated and air-conditioned the garage when I added six fluorescent ceiling lights and several wall power outlets (everywhere they weren't needed, it seems) to convert it from garage to aircraft factory. My wife still wonders why she can't find things she knows we used to have.

Q2151 arrived (first thirteen boxes) one morning as I was leaving for work. Of course I couldn't just leave all those goodies stacked up without opening them to see what was inside. Then, I had to organize all those loose items and inspect everything. And then I couldn't resist checking the items received against the packing lists. I never did get to work that day. Maybe I should have reported in as airsick? At least, I got my list of backordered items together and fired it off.

My education began in earnest as I looked at the 'Basic Required Tools' list and realized the trouble I was in. I had no idea what was meant by "taps" (it had been music to go to sleep by in the Marines, but I didn't think that was what was meant), pop rivets (a quick check with my father eliminated one possibility), X-Acto knives (I bought some, but have not really used them all that much), or Dremel. I was definitely entering into a world I knew nothing about, and one for which my Math degree and programming background had not prepared me. To get a better idea of what I had gotten into, I read the plans. Then I read them again and underlined key phrases and hi-lighted key actions (find, lay-up, assemble, slip, etc.). That last action (slip, not etc) is one that I believe is a misnomer. Nothing 'slips' into anything unless one (or both) items are adjusted (reamed, sanded, filed, cussed, or otherwise convinced) to fit properly. After the second reading, I had a colorful set of plans, but I felt that I understood them. The third reading of the plans is going on as I build. While I have not progressed as quickly through the construction stage as some, I am having a ball. After finding my local EAA Chapter, Chapter 12, and joining it, I became even more glad I discovered the world of sport aviation.

During the construction, I have met any number of new friends. People who have built an aircraft and know some of the 'gotchas' I should look out for. People who are also working on composite aircraft and who always seem to have time to help out on a large layup or stop what they are doing and compare notes or give a non-pilot builder a ride to keep the motivation level up. I have also moved from Houston to Dallas, and find that EAAers here are the same sort, so it must be endemic to the breed. When the move occurred, the Q2 (now N83TG - I didn't know about the move when I registered it) had its own truck. The movers carefully wrapped it in padding, tied it to a half-flatbed with the enclosed part of the truck containing the rest of the parts and tools, and endured many comments and questions on their CB's during the 300 mile trip. I wonder what the builders who have made the trek to the airport have experienced. I should know soon now as only the bottom of the canard and the vertical stabilizer remain to be filled and sanded before painting can begin. That (painting) is one thing, which I wonder if I am up to. I may just hire that job out, but I know the project will soon be finished and in the air -- maybe this year, certainly by next year.

You can order a PDF or printed copy of Q-talk #1 by using the Q-talk Back Issue Order Page.