After 3 1/2 years I flew my Q-200 in late August for about ten minutes. My oil temp went through the redline so I stayed in the pattern. On final, I couldn't get the nose high enough for a proper touchdown, lost control of the aircraft on landing roll, broke the canard and prop and am now rebuilding with the Tri-Q kit.

ED. NOTE: Another reason I always recommend many hours of taxi time (5 or more hours, and at increasingly higher speed in 5 mph increments) is that your steering control should be as habitual and automatic as possible, for if you get FORCED into a quick first landing with your heart and brain pounding at 90 miles an hour you will have plenty to worry over besides directional control. Prior taxiing to boredom MAY help.

I'm sending a couple pictures of my Q-200. One is just after completion of 2 years and 1400 hrs total building. It never made it into the air. During the third hour of high speed taxi testing, I let it get away from me. No problem with the airplane, just lack of taildragger time. I am building a new main wing and replacing the canopy spinner and repairing the lower cowl.

I am very lucky - minor injuries only. Please stress the need for taildragger time for anyone who has built or is building a Q-2.

Chapt. 15, taping 9 BID of 1"x2", one by one on 20 locations, even using Saran Wrap, becomes too thick and heavy a piece for a good layup. I devised a female template (FT) by making a 1"x2" cutout on a 1/4" plywood and covered all inside edges with duct tape as shown.

I laid out a piece of Saran 2"x5" and installed FT on it using small tabs of masking tape, put some resin on wrap in the cavity, and one by one laid 8 plies inside cavity. Before detaching the Saran to install on location, layup one layer on the bare fuselage location, then complete installation by laying on the other 8 plies. This method worked easier, faster, with good results which were augmented by use of C-clamps and squeezing the resin out.

We have finished and taxi tested the Q-200 and it flunked! We had the misfortune of having a Quickie dealer build our Q-200 canard at a time when the plans were in error on the canard sweepback. The error was not discovered until we finished the project (the canard was the only thing we did not do ourselves). Weight and balance calculations showed a tail-heavy ground handling airplane and a somewhat nose-heavy flying plane. Above 20-30 mph the plane wanted to swap ends. Our solution will be the new tricycle conversion kit.

ED. NOTE: I wonder if Sheehan reviews his bank statement as lackadaisically as he does the plans he sends out. Would you believe it, after ALREADY screwing up the Q-2 LS(1) plans, he has repeated the stupidity on the Quickie LS(1). I just got a copy of a revision letter that advises Quickie builders that the carbon fiber spars must be tied together by 15 plies on the bottom rather than the 3 stated by the plans. BROTHER! And this guy's gonna save sport aviation!

I had excellent results jigging the front and rear fuselage sections together by Bondoing about 25 "fingers" of 3/4"x1"x4" pieces of plywood to the forward fuselage half. I cut a 1/8" deep 2" wide dado across each to account for the difference in thickness between the forward and rear sections. I next slid the rear section against the forward one using the fingers to pull the two into radial alignment and Bondoed them together with two 6" BID tapes around the outside. Working from the inside, I cut out 4"x4" squares for the trailer pads through the inside skin and foam centered across the seam, then laid up 10 ply BID in the cavity. The aluminum mounting plates were fashioned per plans and positioned across the seam. The screw holes were marked from the outside by shining a drop light through from the inside. After drilling the holes while everything is perfectly aligned and rigid, the two fuselage sections were simply cut apart using a sabre saw with a grit edged blade. 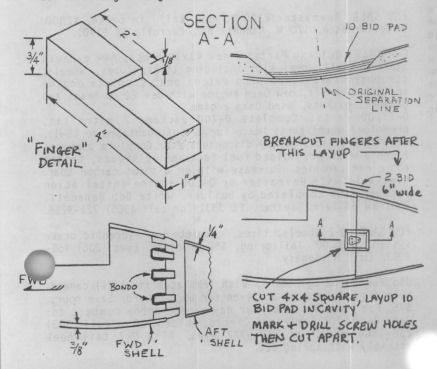 Taxi testing showed the aircraft to be well-behaved taildragger at speeds up to 40 mph indicated. At 50 mph a small adverse aileron steering was evident, but controllable by the tailwheel. At 40 mph and idle power the speed remains 40 mph, so if the brakes fail, the engine must be shut down.

First flight showed a strong tendency to depart the runway to the left. This was fully correctable by using half the travel on the right aileron. After adjusting the elevators the roll tendency was eliminated. Right rudder is required to take off; I'd say twice the amount of a Cessna 152. The plane becomes airborne at about 55 mph after an extremely short roll of 750 feet. I typically climb out at 100 indicated and 1000 fpm with two aboard and throttled back some to keep the CHT down. Rudder input is not required at airspeeds above 100 mph even with 60 degree banks.

Landings are a challenge. The first flight landing approach was made at 100 mph, this speed results in flying 3000 feet down the runway waiting for the speed to bleed down enough for a landing in the last 4000 feet. What I'm saying is that you should have a long strip for the first few landings. At my current skill level I approach on low final altitude (drag it in) at 85 mph with power as required, hold off flaring until 1 foot from the runway then try to fly just above the runway until it lands gently, any big bounce requires added power and longer landings but small bounces can be corrected easily. When the tailwheel is down and the plane straight down the runway I use full up aileron reflexer, apply some brake, not much, and stop in 1800 feet. I have landed Cessna's in 400 feet using as much skill, so the Q-200 is NOT in the same class.

1) If you have an engine with break-in oil in the Florida summer you will need an oil cooler. I installed the cooler after having some 250-degree oil temp readings. I also put a flap over the cooler so I can now control the temp during the cooler days.

2) Expect the first flight to be with the aileron way to one side, the elevators act like ailerons but are much bigger and more powerful and until set properly will cause a problem.

3) Make sure the air outlet for the engine is big enough, say 1.2 times the area of the inlet. Mine wasn't and it got hot quick once airborne.

4) Build in aileron trim. I didn't and now I'll have a harder time doing it. When I fly alone I must hold right stick, when with my wife it's ok, and with a certain unnamed (heavy) friend of mine I hold left stick. This is no fun on a long trip.

5) Use at least a 2" diameter air pipe from the NASA inlet cabin air. I used 1" and not enough air flows. I located the NASA duct forward of the plans stated location due to interference with a bulkhead and this location works great (vent starts about 6" back from the firewall).

I am a 30-year-old private pilot SEL with 70 hours nose wheel, 40 hours taildragger. Flying experience before flying the Q-200 included becoming proficient in two other taildraggers and practicing low fast approaches (Cessna 152 at 90 mph over the numbers-the tower was wondering about me!).

Loran wire antenna was run from FS120 along top of shell then up the front of the vertical fin. A metal screen was installed behind the main wing and grounded. The control tubes on the aileron and elevator were grounded. Magneto filters installed. All coax cables not in use are grounded. The Loran I chose for $700 was the King 8001-1. It works fine except that when the alternator is on the Loran freaks out after a few minutes, I intend to install shielded cables to the alternator from the regulator, and possibly a few filters.

Conclusion: The Q-200 has met the factory specifications, it will carry my wife and I plus 67 lbs of baggage at a cruise of 200 mph with great fuel economy. The maintenance should be low because it's a simple machine. The non-stall characteristics are comforting in a busy pattern. The only drawback is short field landing.

1. Page 14-5. Unproven Idea. I am not confident that the plans method for installing the fuel tanks will insure that fuel will not get to bare foam at some point on the perimeter. I intend to try the following method. Remove about 1/4" to 3/8" of the outside glass plys around the tank perimeter. Remove foam down to the inside ply. Now when installing the tank I can place flox on top of the inside ply to join it to the fuselage. I can fill the entire void with flox or let a small radius of flox cure and fill the remaining void with micro. Of course I can still install the plans stiffener as well. 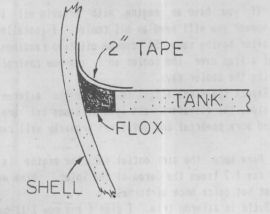 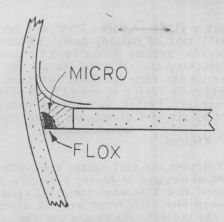 You can order a PDF or printed copy of QuickTalk #26 by using the Q-talk Back Issue Order Page.