The following article is advice on how best to approach both the test flying and also your own initial training in your Quickie, in order to reduce the risk of injury or damage to yourself, third parties and the aircraft. This article is based on my own experience of flying and operating a wide variety of aircraft types. This is advice, it is therefore up to you whether or not you choose to follow it, however I would say before you commit to either test flying or conversion to type that you talk at length with a suitably experienced Q driver.

The following text is just one way I propose that first flights on high performance aircraft be carried out and is certainly not a panacea to what can be a complicated and sensitive subject. The article will have a UK flavour to it (including spelling) as that is where the majority of my experience comes from and for that I make no apology. 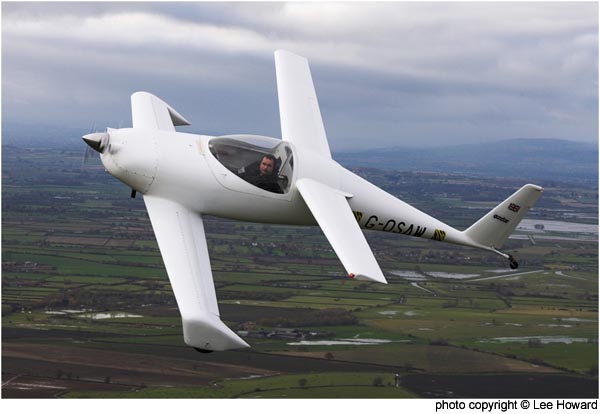 Here in the United Kingdom the Light Aircraft Association (LAA), our equivalent of the EAA is given delegated responsibility by the Civil Aviation Authority (CAA) for airworthiness of homebuilt aeroplanes. When a builder submits his paperwork for initial test flying, he has to submit the location where the test flying will take place and who it will be performed by. This is to ensure that the site is suitable and the pilot is suitably qualified to carry out initial test flights. Very rarely in the UK will a builder be permitted to carry out the test flights on their own aeroplane unless they have proven track record of carrying out these flights or extensive experience on type. Normally a test pilot will be recommended by the LAA and will either be fully qualified professional test pilots or pilots who are very experienced on type (such as Gary McKirdy for Quickies) and have flown a number of different examples of the type so they can understand if the particular example they are flying is representative or not. We have an awful lot of restrictions and red tape when it comes to flying in the UK and we could learn a lot from the FAA and EAA, however I believe this is one area where we have got it right. If you’re not suitably experienced or qualified you won’t be doing the test flight, period. Some may disagree with the following statement and that is fine. I believe that a builder really has no place carrying out the initial test flights on their own aeroplane. The reasons for this are as follows;

However, if you do end up doing the test flying whether it is as an owner/builder or experienced pilot on type doing it for somebody else, here are a few considerations to think about. They are not in any particular order, other than which they came into my head. It is by no means exhaustive!

Learning to fly your Quickie

As previously stated I have flown a wide number of different aircraft and on a number of occasions I have flown high performance tailwheel aircraft that are either single seat or have no dual controls. Each time I have done this I have carried out rigorous preparation flying in other aircraft gradually working myself up to it. As I have already stated doing 5 hours in a Cub a few weeks before you fly a high performance taildragger, especially a Quickie doesn’t really cut the mustard.

Quickie two seat aircraft should be treated as single seat aircraft when it comes to pilot conversion as very few, if any have full dual controls and by this I mean dual throttle and brakes as well as the flying controls. Not having full dual controls can therefore make life very difficult for an instructor converting a pilot onto an aircraft such as a Quickie. This is why the owner should put in as much preparation as they possibly can before flying their Quickie.

Ideally you should be keeping in current flying practice all the time, however I realise this is very difficult for the majority of pilots due to the expense of it all. What I would say is work it up in stages. Get yourself checked out with an instructor in the last aircraft type you were current in and go through a range of general handling exercises and circuit work until you are up to speed and he is happy that you are safe.

These flying exercises should focus on the general handling techniques that will be required to give you handling confidence for your first flight on type. They should include but not limited to;

The above exercises should be repeated in the higher performance aircraft and your Quickie when you fly it.

Next go and fly with an instructor in a high performance type such as Pitts or RV so that you get used to the high approach and threshold speeds along with twitchy handling. Again you need to go through all the aspects of general handling and circuit work until you are safe in high performance aeroplanes.

You should really aim to get 20-30 hours over a period of a few months in different aircraft types and different environmental conditions to build experience and capacity before your first flight. The 20-30 hours doesn’t need to be with an instructor once you’ve been checked out, but it will consolidate your flying skills in preparation for flying your Quickie so make the most of them and keep practicing those core flying skills. Be self-critical and analyse what went well and what didn’t go so well so that you can improve for next time. It is these qualities that will make you an above average safe pilot.

The final step is to try and get a ride with a pilot who owns the same type of aircraft as you. You might not get to land or take off but the experience, sights, sounds and smells will reduce the unfamiliar sensations when you come to fly your own and will help give you the mental capacity you will need for your first flight. Get him to show you any handling quirks with the aircraft so as they don’t come as surprise and also prove that it is normal for the particular type. Get him to demonstrate a few circuits so you can build a picture of what a circuit looks like, also get him to show you a practice forced landing pattern so that you get a feel for its glide characteristics should the engine fail. This way you might be some way prepared for the first flight in your aircraft. If you can find somebody who is qualified and competent enough to instruct you and give you a full conversion to your aircraft then this is even better.

Once you come to the stage where you are about to conduct that first flight on type ensure you have a programme of air exercises that you will carry out on your first flight and stick to it. The list of exercises I mentioned earlier is a good start although leave off the practice forced landings on the first couple of flights. Talk it all through thoroughly with your Quickie mentor and if possible arrange for them to be there on the day for any advice or moral support they can give, particularly if they a pertinent to the conditions of the day.

Don’t feel pressured into flying. If it’s not right, it’s not right and you shouldn’t fly. Put the aircraft away and come back another time. This can be frustrating at this stage but you need patience and self-discipline. As per the test flying don’t try to land off your first approach, always carry out a low approach and go-around to get a feel for the aircraft as you approach the runway. Also don’t commit yourself to a landing if any subsequent approach is not on parameters as you could be storing up a whole load of problems for the landing.

As stated earlier, get your test flying done by another pilot who is more qualified and experienced on type. The above steps are aimed at a first flight on type after the test flying is complete, as the last thing you need to be worrying about is checking performance figures or handling any potential malfunction.

I know the above seems like a gold plated solution in ideal world, however you really should strive to do most of the things listed above as possible as it will really reduce the risk you are carrying after all the hard work and expense expended on your shiny new aeroplane. I know some of it may seem extra expense when you have completed your plane at considerable cost but what is a couple of thousand Dollars compared to the loss of your aeroplane or even your life? In my opinion doing this is better than any insurance policy. A loss rate of 75% of first flights in 2011 is totally unacceptable, and owners should do everything they can to reduce the risk of injury or damage to themselves, third parties and their aircraft.

This is not an exhaustive article by any means but the advice in it is designed to set you in good stead for the initial test flights of your aircraft as well as your own initial flights on type. If in doubt about anything always ask as there are plenty of highly experienced Q drivers around who will be able to give you the appropriate advice.